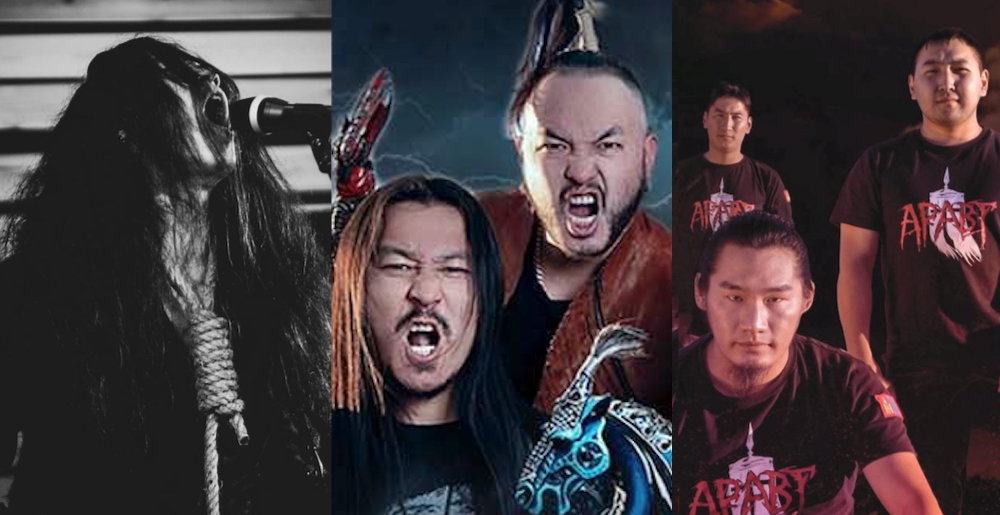 The Who’s-Hu of Mongolian Metal

Archery, horseback riding and wrestling – these are the traditional Mongolian activities done at the Naadam Festival, which runs every July in the country. Music, of course, accompanies the event, and the musical traditions of the Mongolian people are just as rich, with unmistakable throat singing which accompany songs that invoke nature, history and mythology.

With metal music, the Mongolians have fused some of their traditional songwriting and playing styles with the plugged-in distortion found in modern metal. Galloping-horse-like beats and gang-chanted, throat-sung choruses create exhilarating and evocative songs across a variety of metal genres – folk being the most identifiable and well-known when it comes to Mongolian metal. But don’t think for a second that it is the only genre found in the country.

Mongolian folk metal mixes elements native to the country: throat singing, indigenous instruments such as the morin khuur (horse head fiddle) and tovshuur (three-stringed lute), along with a driving beat that wouldn’t sound out of place coming from an aboriginal drum session.

The most famous export of Mongolian folk metal is undoubtedly The Hu. Their videos have gained millions of views, normalizing the style to Western listeners. Their covers of Metallica songs “Sad But True,” and more recently “Through the Never,” have only increased their popularity, as now fans of Metallica have been adding The Hu to their playlists.

Additional folk metal bands include Хурд/Hurd (“speed”), who formed in 1987 and are considered the first band to introduce heavy metal into the Mongolian music scene, with a style has progressed through the years, from classic metal to ballads to nu metal. Altan Urag (“Golden Lineage”), formed in 2002, showcase scat-speed Mongolian throat singing, which has seen them provide soundtracks for films like the 2007’s Mongol.

Some bands who play Mongolian folk metal don’t come from Mongolia itself – some hail from Inner Mongolia (China) or Beijing, such as Nine Treasures, Suld, Ego Fall, and notably Tengger Cavalry, who brought the nomadic warrior spirit to the masses before their frontman Nature Ganganbaigal tragically died of undisclosed causes in 2019.

While The Hu’s videos are getting several million views, the second most popular Mongolian-style folk metal band as of late would certainly be Nine Treasures. Nine Treasures has seen a popularity boost in recent years – but are the numbers rising up to The Hu’s level? Vocalist Askhan says, “[The Hu] did a great job! I am really proud of them. But it seems not much is happening on our side. I see some increase in our numbers but not much.”

It’s also worth mentioning that most of the Mongolian bands are entirely independent – without a record label to help them, and release their material through their own efforts – making them true nomads of metal.

АЯСЫН САЛХИ/Ayasiin Salkhi (“Fair Wind”) are known as the first heavy metal band in Mongolia to record a demo and the first Mongolian death metal band to record an album. They emerged back in 1984, playing a classic heavy metal style, but got heavier throughout the years, with the post-’90s output of the band being akin to Floridian brutal death metal. Their latest album is Coffin Town Under the Moon, which is a far cry from what you’d normally think of when Mongolian metal comes to mind – being a pulverizing death metal effort.

Аравт/Aravt give death metal a Mongolian folk fixer-upper. They emerged in 2014 and have since released two full-length records. While the sound of Aravt is akin to death metal, you can hear in the vocals and see for yourself in their videos that Mongolian mythology and traditions are at the forefront of their presentation, being like a Mongol version of Amon Amarth.

Ornaments of Agony is a one-man a sludgy, droney funeral doom project guided by Albin. With gurgled death vocal work, a chaotic and experimental atmosphere glued together with a driving rhythm section, this is a band to listen to when lost in a snowstorm while inebriated after a night at the pub.

Send in the throat-singing clowns! Growl of Clown is Mongolia’s largest deathcore representative, forming in 2014. They prepared their first songs and music in a Yurt, and during their first show, only three people showed up. But perseverance pays off, as GOC built up a deathcore fan-base in the country, even throwing their own event called Wake Up. They have since played some of the biggest stages in Mongolia, such as the Playtime Festival.

Silent Scream are a vicious, bare-bones deathcore band who went to the Mitch Lucker school for the gifted high screamers and low grunters. The band has been rising the ranks as of late, being a part of a few editions of Noise Fest.

Break the Cycle are a metalcore band who were formerly known as Purgatory Destroyers. While I liked their former name better, musically, they make you forget all about Staind’s sophomore effort, with well-composed and heavier than usual metalcore tracks.

The near -50 temperatures that Mongolia often sees in the winter months tests the fortitude of the mortal men who live there. It is indeed a perfect atmosphere for frost-caked black metal to brew within the self-made studios of the musicians in the country, but in reality, there are just a few who produce this genre of metal in Mongolia.

The one-man black metal shaman Karmantic has dragged spellbinding DSBM into sunlight with albums like Lethality. The band leader Puriel Grushl, complete with a noose around his neck, employs members to help with his live shows. Since Karmantic emerged onto the scene, the band has played some of the major Mongolian metal festivals, and while the genre is overlooked in Mongolia, it is worthy of every minute of your time.

From Zuulun, a remote and relatively inaccessible area in Mongolia in which local Darkhad are known for their practice of Shamanism comes Soyuz, who are a ‘Soviet space program-themed” doom metal band. Soyuz 39 is significant to Mongolia, as Jügderdemidiin Gürragchaa, the first Mongolian cosmonaut, was a part of its crew. In 2020, the band released their first EP, A Cosmic Horror Adventure, a three-song, astronaut suited hot-box of astro-sludge.

Compared to metal, the rock scene in Mongolia has been active longer and is understandably bigger, with bands like The Lemons and The Colors being high-profile representatives. As this article is focusing on metal, we will not list every Mongolian rock band, but the scene is also worth exploring.

Seattle and Mongolia have a few things in common – both places are so cold that you have to wear layers for most months of the year. Both have copious amounts of forests, and both are rather isolated, creating an atmosphere which is perfect for artists to get introspective with their work, taking time to perfect their music before unleashing it in the dingy bars of the area. Formed in 1996, when Kurt was two years underground but bands like Soundgarden were still putting out substantial albums, Nisvanis represent grunge in Mongolia. Their O2 (Oxygen) album, released in 1999, could stand with the best discs released by the big players overseas.

The Tourists are a guitar-heavy band who formed in 2014. Led by vocalist Yoko, they create heavy-though-catchy songs which are custom-made for sing-alongs and radio play, being similar to Joan Jett or Halestorm. In Mongolia, they have played such festivals as the Playtime Festival, and are one of the biggest bands in the country.

Bulsara are a unique band, being on the fence of grunge and nu metal. Some songs utilize Munky- and Head-style riffs with their half-sung, half-rapped vocal delivery. Others, like “Hooson Ertonts” are more grunge in nature, with the music video for the song looking like Alice in Chains’ “Man in the Box” but taking place in the Mongolian grasslands.

Mohanik are an experimental rock band who utilize traditional Mongolian  instruments and nomadic heritage with a post-punk attitude to create something quite unique. The band was featured in a 2015 documentary film Live from UB by Lauren Knapp, which explores the rock scene in Ulaanbaatar.

Gaz 21 brings the rap and the rock combination to Ulaanbataar, which could heat up any Yurt. The band has a penchant for playing Rage Against the Machine covers live, but their original work shouldn’t be overlooked, with songs like “Bish” being Mongolian rap poetry slams over dissonant guitar work.

Metronome majored in the theatrical side of their nu metal university degree – in their video for “Anarchist,” it looks as if they raided Mudvayne’s wardrobe and makeup kit. Their sound is of mechanical, chugging guitar work and shouted, anguished lyrics, which should satisfy any nu metal fan into Slipknot’s debut, Nothingface, downthesun and the more aggressive bands who came out of the era.

Motorway are another band who could be classified as nu metal, though they have described themselves as metal or just rock. Still, they bring the heavy riffs and aggressive vocals straight out of the late ’90s.

Every country has its own big metal festival – one that brings in foreign bands while also showcasing the best of what that particular country has to offer. In Mongolia, this festival is the Noise Festival. Run by Unenkhuu Umbanyamba (who also sings in the band Prophets), it has been in action since 2014 and is usually thrown in the autumn months. The festival has been held at different venues throughout the years, as some have shut down and been demolished, meaning that every festival holds a different atmosphere than the last.

The first festival saw АЯСЫН САЛХИ (who have since appeared on every festival held), Nine Treasures, and Nisvanis. For the next year, Noise stepped it up by featuring Japanese death metal legends Defiled, who played alongside the Mongolian crusaders. The 2016 edition was a massive event thrown at the SS-Club, featuring Japan’s Desecravity and Sete Star Sept, China’s Hitobashira and Russia’s Inner Missing playing alongside a who’s-who of Mongolian metal bands including the ever-present АЯСЫН САЛХИ, Hurd, Bulsara, Prophets and Motorway. The 2017 edition was thrown at the Amrita Nightclub and featured АЯСЫН САЛХИ, Singaporean melodeath band Assault, Storm, Bulsara, Break the Cycle, Growl of Clown and Karmantic.

The 2018 edition of the festival was arguably its biggest and most star-studded. It saw Vader, Hate, Accidental Death Benefit, Thy Disease and Nine Treasures make the trekdown to the Chinggis Khan International Airport for the festival. Mongolian bands Аравт/Aravt, Metronome, Growl of Clown and Break the Cycle also took part in the event.

Umbanyamba’s Noise Promotions has put on a number of shows aside from the big festival, including Metal United World Wide, which saw Beijing’s Scare the Children hit Mongolia along with Ogenix. Defeated Sanity and Krisiun in 2017. In 2019 it organized Marduk, Sepultura and Vomitory’s tours of Mongolia.

Umbanyamba is planning a return with a 2022 edition of the festival, knowing too well the travel restrictions some bands face in touring overseas. Still, he foresees a Noise Festival for the end of 2022.