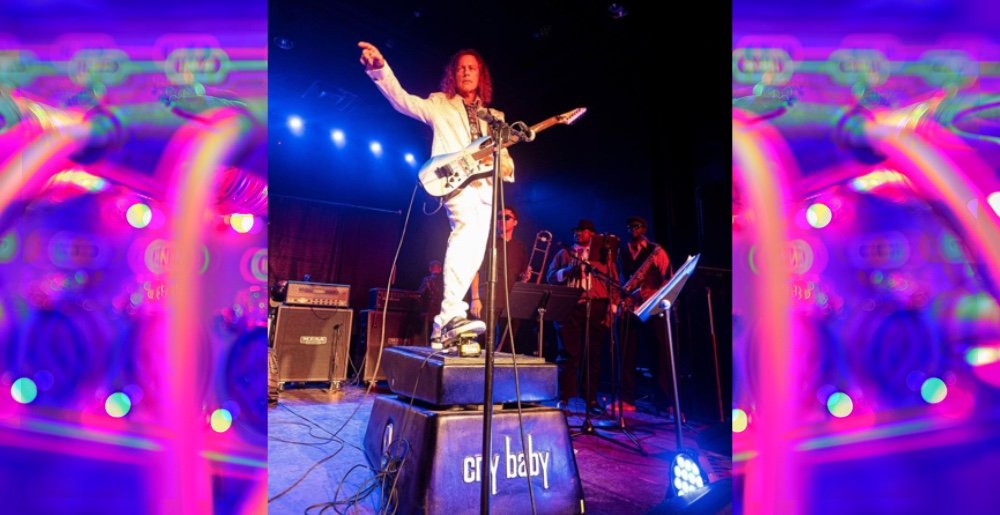 If you know anything about Kirk Hammett, you know he loves two things: classic horror movies and his wah pedal. The Metallica guitarist is famous for leaning on the wah with his full weight and really making those licks weep for him. And apparently, Kirk is a good sport about it, too, as proven by this photo that he recently posted of him playing his guitar on top of a giant Dunlop Cry Baby Wah pedal. And yes, he’s using his actual wah pedal on top of this wah pedal.

How did this moment of mind-bending self-reference go down? Welp, Kirk was performing with The Wedding Band, the group he plays with alongside Metallica bassist Robert Trujillo, who play classic covers and generally have a good laugh of it. And as evidenced by his caption — “Look over there!” — it’s obvious Kirk sees these gigs as an opportunity to clown it up a bit, bless him. Meanwhile, the fact that he’s using his own wah pedal ON the giant wah pedal suggests that his pedestal is unfortunately not operational.

Fun facts: first of all, Kirk doesn’t use a wah while writing, so apparently it’s really his live shows from which fans know his excessive wah abuse. Second, Dave Mustaine, frontman of Megadeth who Hammett replaced in Metallica when he was kicked out for being a mean-ass drunk, took a shot at Kirk in 2019, saying he’d never used a wah until recently and inviting guitarists to “get outside of their comfort zone.” We wonder what it’s like to build an entire musical career and still, every night, be bitter as hell towards your replacement! Not a life we’d want.

Check out Kirk atop his wah chariot below. Maybe the other members of Metallica will follow, and Lars will get a snare that looks like a trash can, while James literally turns into a table.

The shredder loves a movie that rips and tears.

Worst Week Ever 0
Lemmy Ain’t a Nazi, Metallica Warned Us, and More Top Stories of the Week
June 11th, 2022 at 8:04am Emperor Rhombus

Metal Sucks Greatest Hits
0 -
Editorial: Your Dead Metal Heroes Were No Angels
820 -
Rigged: Dream Theater’s Mike Mangini Takes You Through Every Piece of His Mega-Drumkit [Part 1]
0 -
France’s Got Talent, too: Beautiful French Girl Performs Heavy Metal Song on TV
0 -
Video: Killswitch Engage’s Adam Dutkiewicz Wins Everything on The Price is Right
0 -
Twelve Reasons Babymetal are the Single Best Thing to Happen to Metal in the Past Decade
0 -
Ministry’s Al Jourgensen: “I Got Paid to Humiliate Fred Durst”