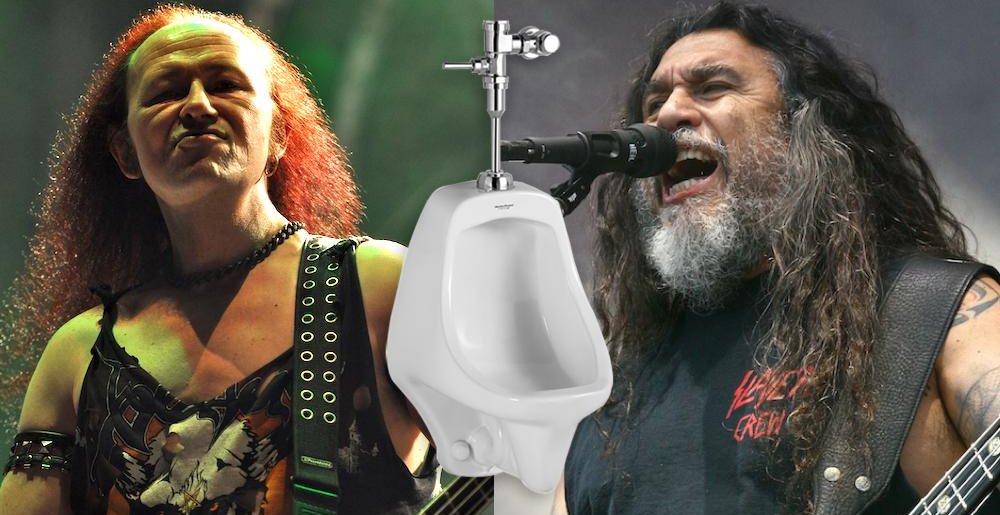 There’s a famous story in the metal world that when Slayer were on tour with Venom in 1985, frontman Tom Araya pissed on Venom frontman Cronos. The story has been morphed into a million and one different anecdotes; the version this writer has heard is that Tom asked for the toilet, Cronos said HE was the toilet, Tom pissed on his hair, a scuffle ensued. All versions of it include Cronos being furious and Tom getting thrown off the bus. Now, Cronos has said that the part you might not remember is where he headbutted Tom so hard he knocked the dude out.

Speaking to Classic Rock, Cronos was asked to verify the story. The guy was typically salty, but explained what actually happened…

“That story has been twisted so many ways…I’ve heard, ‘Tom Araya stuck his dick in the guitarist’s mouth’ and ‘Tom Araya tried to fuck the bus driver’s ear’…

“Here’s the truth. A gig got cancelled, so we let Slayer stay on our bus as they had nowhere to sleep. Then Tom got really drunk and pissed himself. I got annoyed, so I fucking headbutted him and knocked the guy out.

“The next morning he came in with a black eye and was all apologetic, like, ‘Sorry, I was out of order.’ I said, Not a problem, man. It’s metal!”

Huh. Here’s the thing, Slayer themselves have recounted this story, and Cronos’ version doesn’t add up. Here’s what Slayer drummer Dave Lombardo told Decibel back in 2006, via Blabbermouth:

“I remember Tom getting punched by Cronos. We were in the back of the bus drinking, and we were just totally hammered. It was our first time on a tour bus. I remember Venom started the tour with these extravagant tour buses, but by the end of the tour, they were bankrupt and driving around in cars. So Jeff and I were drinking in the back of the bus with Cronos — I think we were playing ‘Hell Awaits’ for him. Tom came in, hammered out of his mind, going, ‘I gotta take a piss! Where’s the bathroom in this thing?’ And Cronos goes, ‘Right here — right here in my mouth!’ And Tom took him literally. He pulled down his pants, whipped it out, and went to the bathroom on Cronos’ hair. Cronos got up, grabbed Tom, and punched him in the face. They spent the rest of the night blaming each other, and Tom did the rest of the tour with a black eye.”

I don’t know why, but Dave’s story rings truer. Maybe it’s because it’s a punch and not a headbutt, and because Tom didn’t get knocked out, both of which feel like Cronos talking himself up (and coming up with a version of the story where he didn’t get pissed on). I also trust Dave Lombardo in these matters. Dude feels honest.

In any event, Slayer ended up the biggest satanic metal band of all time, and Cronos’ former bandmates have their own version of Venom that’s beloved by metalheads the world over, so I guess the piss is on him in the long run!

Metal Sucks Greatest Hits
0 -
What is the best subgenre of metal?? *please read*
0 -
Comedian Rob Delaney’s Open Letter to High on Fire’s Matt Pike
0 -
I, For One, Welcome Our New Robot Overlords
540 -
Glenn Danzig Shops for His Own Kitty Litter
0 -
Who are teh “BIG FOUR SCENE BANDS”????
60 -
BETTY WHITE TOUCHED SLASH’S PYTHON (DON’T WORRY, IT WAS JUST THE TIP)