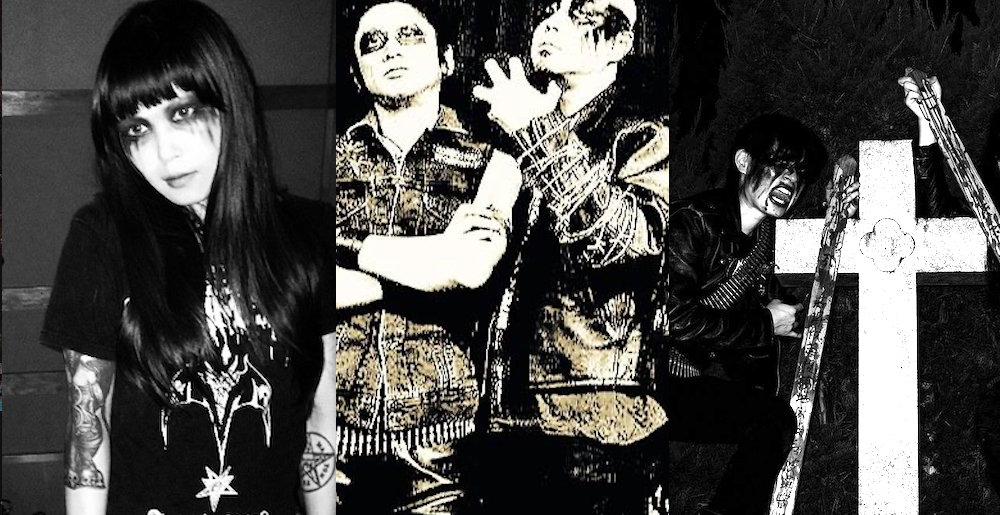 Sigh, Sabbat, Abigail, Gallhammer — you’ve heard those names time and time again. They set the stage for Japanese black metal, and are forever etched in the history books of extreme music. But what about the up-and-coming talent? The underground in Japan has not stalled in producing talented black metal artists, as seen in my previous article naming some one-man black metal bands in Japan.

Osaka’s Zero Dimensional Records has been one of the main underground distribution syndicates for the black metal extremists found in Japan. Sendai’s Fatal Desolation is just one of the bands on their roster, which includes bands like Juno Bloodlust and Charlotte the Harlot. Fatal Desolation emerged in 2009 and brought the temperature down with their Cold, Starless, Moonless LP in 2011. Currently, their status is unknown, though we have our winter clothes ready for another blast of icy winds from these desolated ones.

The Far East Black Metal from Zero Dimensional Records is a 2019 record featuring a few of the upcoming hordes of black metal minions in Japan along with old favorites. Miasma Death are but one of the bands on this record (which also includes Ebola and Sungoddess), and bring an old-school, slow and putrid sound accompanied by ghastly background hymns. Deathrash Armageddon, the label known for releasing works by Abigail, released their 2017 self-titled EP. Their most recent effort is a split with the classic Japanese black metal band Cataplexy.

Evil is as Evil does. Formed in 2011, this Japanese black thrash metal band captures the darkness of first wave black metal and unites it with early Teutonic thrash in the style of early Sodom. Their second record, Possessed by Evil, released via Nuclear War Now! Productions out of Texas, is an unapologetic declaration of war waged by these unholy hounds of hell.

The new blood drips down the inverted crucifix with Bitcheater. Freshly conjured from some fiery pit in 2020, this band made of Yasuyuki Suzuki from Abigail and Matsuaki Suzuki from Gorgon have quickly made a blasphemous name for themselves with the release of their first full-length, Worship of Satan. The sound of Bitcheater goes back to early satanic parties in parking lot with someone spray-painting ‘Welcome to Hell’ on the wall while his buddy packs another bowl.

You may be finished with Bitcheater, but Yasuyuki Suzuki isn’t done with you. Volcanic War is another new project of his, which dials it back a bit, being similar to Abigail’s early output. Toxic War Holocaust is the first album to seep out of this black lava-filled volcano (via Nuclear War Now!), which features songs you might want to block Grandma from seeing if you post them on social media, like “Nuclear Pussy” and “Castle of Sodomy.”

Meaning ‘hourglass’ in Portugese, Ampulheta are a raw black metal project emerging in 2010. Yuga is the main band member, providing drums while screaming the vocals (she also drummed in Apocalyptic Slave), and with Ampulheta has released two demo releases to date. Neblina, their first demo from 2011, is akin to hearing fourth-generation copies of early BM tapes — listening to it conjures images of the band playing in some skull-filled basement. Their second demo, Disturbing, featuring the addition of Soma on guitar, and is a cleaner sounding effort, as though the basement now has the skulls ordered lovingly on a shelf.

From the ancient city of Kyoto comes Pterion, named after the H-shaped formation of sutures on the side of the calvarium representing the junction of four skull bones. The band, appropriately, is a junction of five individuals who make up a deformed skull found in one of hell’s many morgues. So far, one EP has been released via Zero Dimensional Records. Here’s to a few more malignantly-assembled craniums.

Japan has a handful of one-man black metal artists, and Ebola is one that I should have added to that article, but alas, here he is among the black-shrouded gangs. Since 2014, the project, manned by Youta (who also does guitar in Zxui Moskvha), has released a respectable number of splits and albums, including a few with fellow one-man project No Point in Living. Ebola is depressive, though tranquil, comforting you for one minute and having you bleed through your orifices the next.

Turn up the evil! Birth Ritual formed in 2002, so it could be argued that they’re not being modern enough, but fuck it. The band play a form of blackened thrash that is more about the jovial celebration of evilness than trying to sound evil, like a hedonistic hell party put on by a gang of Cenobites. I imagine a Birth Ritual concert could only be attended by bulletbelt-wearing dudes in Venom shirts with scantily clad extras from Danzig videos dancing on stage; and a keg full of sacrificial blood on hand in case anyone gets sick of beer.

The “Orthodox Extreme Frigid Black Metal Legion” known as Zxui Moskvha hail from Oita and include members from Blasphemy Night, Ebola and Ephemeral. Descent into Torment is the four-piece band’s first EP, released through Zero Dimensional Records, which is a thunderstorm of familiar old-school, second wave sounds made modern. The band has certainly studied what works in black metal songwriting, and any Darkthrone or Mayhem enthusiasts are sure to enjoy the EP.

From desert fuzz to avant garde madness, Japan is Loud proves the land of the rising sun has something for everyone.