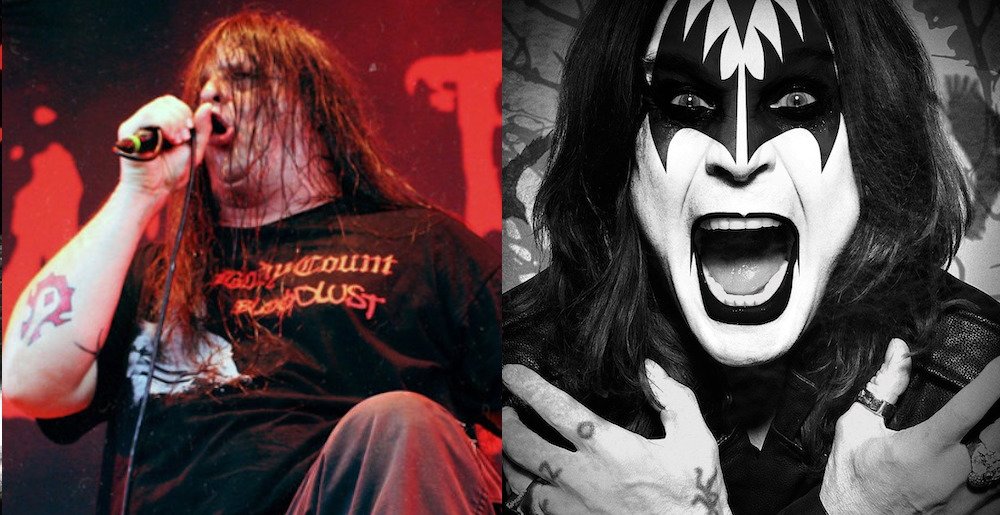 Quick shout-out: the photo in our header featuring Ozzy in Gene Simmons’ make-up is by Christhian Merlin, who created an entire series of famous celebrities in KISS make-up. Go check ’em out!

Every extreme metal fan has had a moment of realizing that the classic metal which so many dudes insist is “the real shit” just doesn’t go that hard. Whether they’re realizing that classic Alice Cooper is showtunes or hunching their shoulders upon first hearing King Diamond’s falsetto, millions of modern metal fans know the bafflement of discovering that the foundations of their scene do not crush. Now, Cannibal Corpse frontman George “Corpsegrinder” Fisher has discussed his first metallic loves, and mentions how finally seeing Black Sabbath made him kinda wish they looked more like KISS.

Not that Corpsegrinder dislikes Sabbath — quite the opposite. Speaking to Chaoszine, the vocalist said that the band were his first introduction to metal (transcribed by Ultimate Guitar):

“Probably when I was a kid, probably before I was even 10 years old. Black Sabbath was the first thing that I really heard that made me be like ‘Wow!’ ‘Cause that’s the first metal band. My parents listen to music, my father loves Hank Williams Senior, old country music, he likes Rolling Stones and AC/DC, a lot of rock and hard rock.

“I’m sure it was through him or one of my uncles that I heard Black Sabbath for the first time when I was seven or eight. Might have been even before then, I was probably scared of that. [laughs] You listen to the song ‘Black Sabbath’… When I first heard that, I was like, ‘Shit, this is evil.’ But yeah, probably around then it would be Black Sabbath. And it pretty much changed my whole outlook on things.”

George goes on to say that it was KISS who first caught his attention as a rock band — but that was mostly because of their look.

“Maybe Kiss. But Kiss was more always to me like rock and roll. They looked like Black Sabbath sounded. Especially Gene Simmons.

“He looked evil, he spat blood. And he looks like every person in Black Sabbath sounds like. If someone played you Black Sabbath for the first time, and you never saw what they look like and then you open your eyes and you showed them a picture of Gene Simmons with the blood from his mouth and the axe bass guitar, you’d be like, ‘Okay, yeah, that’s exactly what I imagined when I heard the song ‘Black Sabbath.” But Black Sabbath looked more just like some kind of hippie dudes, I guess. But the music was totally different, heavier than anything else.”

Check out the full interview below. You can catch Cannibal Corpse on one of the dates listed below: