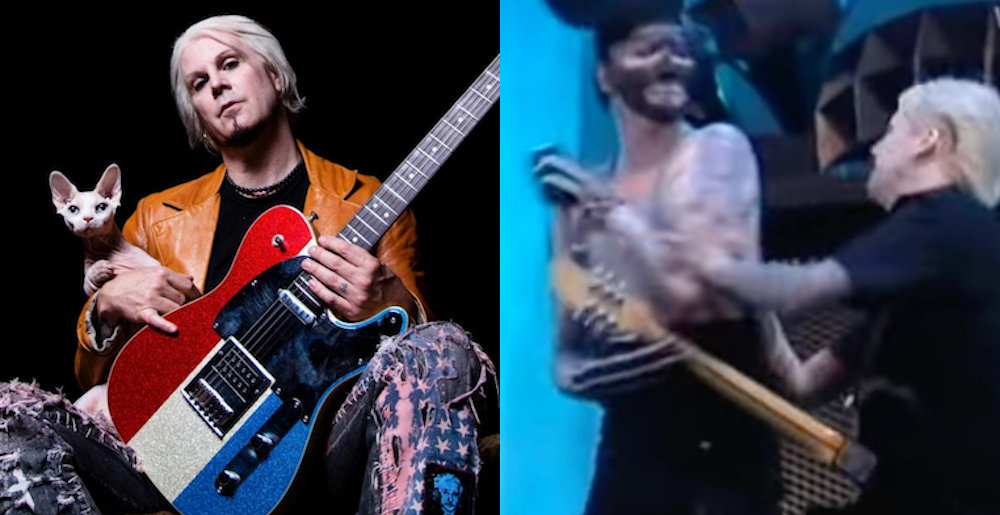 John 5’s 2003 Onstage Fight with Marilyn Manson Was a Reaction to His Sister’s Death: “He Didn’t Do Anything Wrong. I Just Snapped.”

These days, we know John 5 as the guitarist for monster-rocker Rob Zombie. But once upon a time, John played for Marilyn Manson, and in 2003 famously threw down his guitar and tried to fight Manson onstage during the Rock Am Ring festival. Now, John has revealed the details behind the fight, and they’re way more tragic than scandalous.

As you can see on the video below, the fight started when Manson kicked John in the butt — which the guitarist has made it clear happened all the time. This time, though, John lost it, threw down his guitar and came at Manson as though to say, You wanna go? Manson seems to invite a fight…but as you’ll read below,

Speaking to Sirius XM’s Eddie Trunk, John was asked about the fight, and revealed the details behind it, as transcribed via Blabbermouth:

“I was in Europe and I was coming down the stairs, off a stage after a concert, and they told me my sister died. And I was in a state of shock; you just go into a state of shock. And here’s the strange thing that happened to me: I didn’t sleep for days and days and days. It was the strangest thing. I just wasn’t tired. And I remember going to the band members’ rooms, going, ‘I can’t sleep. I just can’t sleep. I haven’t slept in now two days’ or blah blah blah.

“So anyways, fast forward to the show. Now, what Manson did, that happened all the time. He didn’t do anything wrong. I just snapped. It was weird. I went nuts. I didn’t even remember. I just snapped. And I feel terrible watching it now because it really was my fault. You can’t really hear what he’s saying, obviously, but he’s saying, ‘Pick up your guitar.’ ‘Cause it looks like he’s going, ‘Come on. Come on.’ But he’s saying, ‘Pick up your guitar. Pick up your guitar,’ because he knew what was going on. And I feel horrible about it. But it was just a bad situation at that time… It was terrible because he was so nice during that time and all that stuff. I was in such a weird place, and it was just a bad time. I don’t even remember it happening. It was just terrible.”

Wow, that’s incredibly sad. We’re sorry for John’s loss, and his story is a reminder that everyone reacts differently to such a horrible tragedy.

Check out the video below,

Metal Sucks Greatest Hits
0 -
Watch an Old Lady Rock Out to AC/DC’s “Highway to Hell”
0 -
The formula 4 good music: Generic, but with a gimmick (*please read*)
0 -
The Top 25 Modern Metal Frontmen: The Entire List in One Place
0 -
What if Black and Death Metal Albums Were Children’s Books?
0 -
Video: Dudes Rockin’ Out to Van Halen Meet David Lee Roth, Have No Idea Who He Is
0 -
Editorial: True Loyalty Means Admitting When Your Favorite Bands Suck