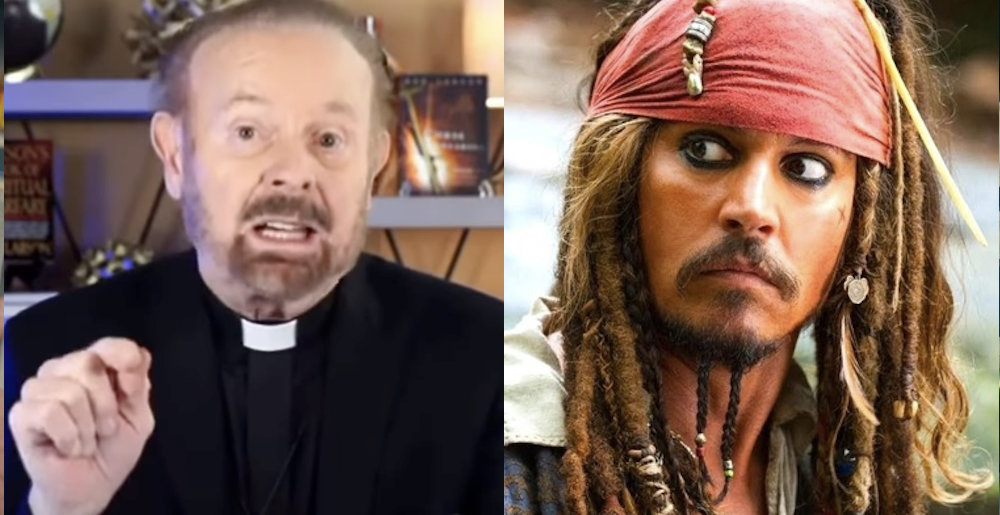 There’s no one on this earth funnier than Bob Larson. The evangelist, self-proclaimed exorcist, and pastor of the Spiritual Freedom Church in Phoenix has long been one of metal’s most vocal enemies (we even included him on our list of public figures who openly hate heavy metal). Bob played a huge part in the Satanic Panic of the 1980s, and became famous for regularly arguing with a stoned Glenn Benton of Deicide on his radio show. But now, Bob has a new fear — PIRATE DEMONS. According to Larson, they’re real, and might have been the cause of actor Johnny Depp’s recent personal and legal troubles.

You might watch the clip below via our favorite Instagram account Christian Nightmares and think, When did a horrible potato learn to talk like a nerd in a bad TV show? But no — THAT’S Bob Larson. And in his latest POV rant, Bob makes it clear that pirate demons exist, that he’s exorcised them abroad, and that by playing Jack Sparrow in Disney’s Pirates of the Caribbean movies, Johnny Depp invited them into his life.

Ugh, I fucking LIVE FOR THIS SHIT. Like, don’t get me wrong, Christian evangelists can get as fucked as fundamentalists from any major religious or spiritual group, and Bob’s the biggest skin tag of them all. But pirate demons! For someone who hates Halloween, Larson definitely gives us good costume ideas!

Check out this bizarre take below:

Heavy metal is one of popular music’s original villains. Because […]

Also includes Between the Buried and Me, Black Label Society, Marilyn Manson, and more.

Tweet Twat 0
Is Johnny Depp Going to Be the New Guitarist for Marilyn Manson?
January 17th, 2018 at 9:49am MetalSucks

The shock rocker says the movie star is “considering” it.

Metal Sucks Greatest Hits
0 -
Exclusive Interview: Damien Echols of The West Memphis Three on His Life After Death
0 -
Avril Lavigne Must Be Stopped
0 -
Iudicia is Your New Favorite Band
0 -
Who are teh “BIG FOUR SCENE BANDS”????
1600 -
Varg Vikernes Feels Guilty About Enjoying Sex with Men
0 -
Etienne Sin: What the Actual Fuck