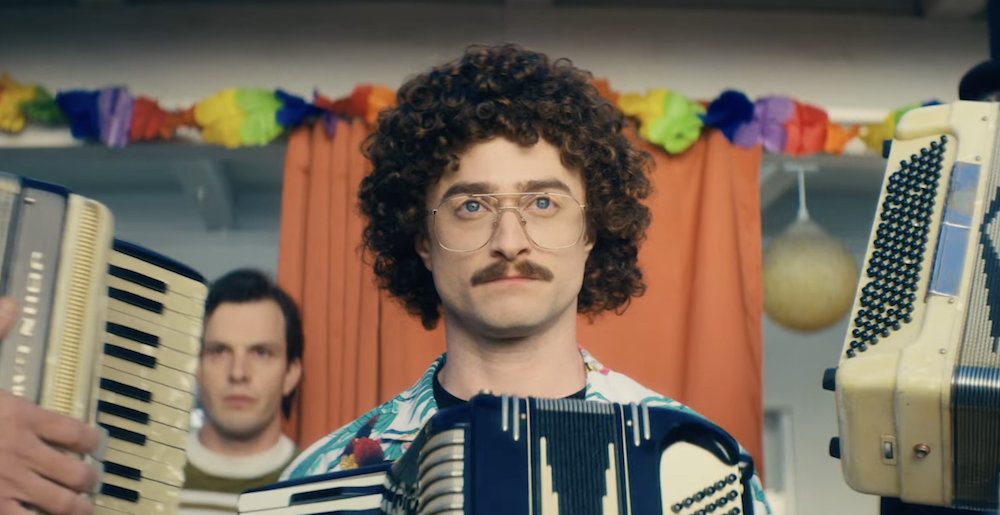 In February, we got our first look at Daniel “Harry Potter” Radcliffe playing parody master “Weird” Al Yankovic in the upcoming rock biopic Weird: The Al Yankovic Story. Now, the first trailer for the film has been released, and you can watch it below.

Our first reaction is: is “Weird” Al pulling a “Weird” Al here? Radcliffe definitely seems more hardcore and gritty than we ever expected Yankovic to be — is this movie a parody of rock biopics, a la the genius Walk Hard: The Dewey Cox Story? Second, is the “Weird” Al voice fake? Not Radcliffe’s, but Yankovic’s himself. Like, we really expected to hear Daniel Radcliffe doing that goofy, googly-eyed voice with the lisp that Al is known for…but is that all an act on Al’s part? Is Al the Andy Kaufman of making fun of Coolio? Guess we’ll just have to wait and see.

Finally, is this going to be one of those Scott Pilgrim-style movies where most of it is in Al’s mind? That would make this whole thing make a lot more sense. Then again, who knows? Maybe Al Yankovic had a rock star lifestyle I’d never even dreamed of.

Which might be the case, because according to the press release for the movie, the film:

“…holds nothing back, exploring every facet of Yankovic’s life, from his meteoric rise to fame with early hits like ‘Eat It’ and ‘Like a Surgeon’ to his torrid celebrity love affairs and famously depraved lifestyle. WEIRD: The Al Yankovic Story takes audiences on a truly unbelievable journey through Yankovic’s life and career, from gifted child prodigy to the greatest musical legend of all time

Hopefully, we’ll get to see “Weird” Al doing blow with Tupac or something.

Check out the teaser trailer below. Weird comes out this fall on Roku, of all places.

Sponsored Links from Across the Internet
Show Comments
Related Articles
Worst Week Ever 0
Peter Steele Punched Chino Moreno, Mike Portnoy Feels Bad for Mike Mangini, and Other Top Stories of the Week
May 7th, 2022 at 7:47am Emperor Rhombus

Not Quite Metal? 0
Here’s Your First Look at Daniel Radcliffe In The “Weird” Al Yankovic Biopic
February 23rd, 2022 at 8:53am Emperor Rhombus

This looks oddly sexier than we anticipated.

“Weird Al” Yankovic has to clarify that this isn’t one of his parody videos, while Monster Truck’s anti-snowflake frontman is “hurt” by comments from Danko Jones.

Metal Sucks Greatest Hits
0 -
Having a Rough Day? Try Hatebreed Motivational Posters!
0 -
Footnotes: A Handy Catalog of Every Song from Which Avenged Sevenfold’s Hail to the King “Borrows”
0 -
Ministry’s Al Jourgensen: “I Got Paid to Humiliate Fred Durst”
0 -
Verax’s Terrible “Time Wasters” is a Great Waste of Time
0 -
That Time Shaun Got Drunk and Filmed a Music Video with His Cat
0 -
It’s Official: There is Too Much Slayer Merchandise