Metal Sucks
Metal Sucks Vinnie Paul’s Estate to Auction Off His Drum Kits,... A Dead Body Was Found In the Parking Lot of a My Chemical...
- Tweet SHARE
Enlarge
Metal Legacies 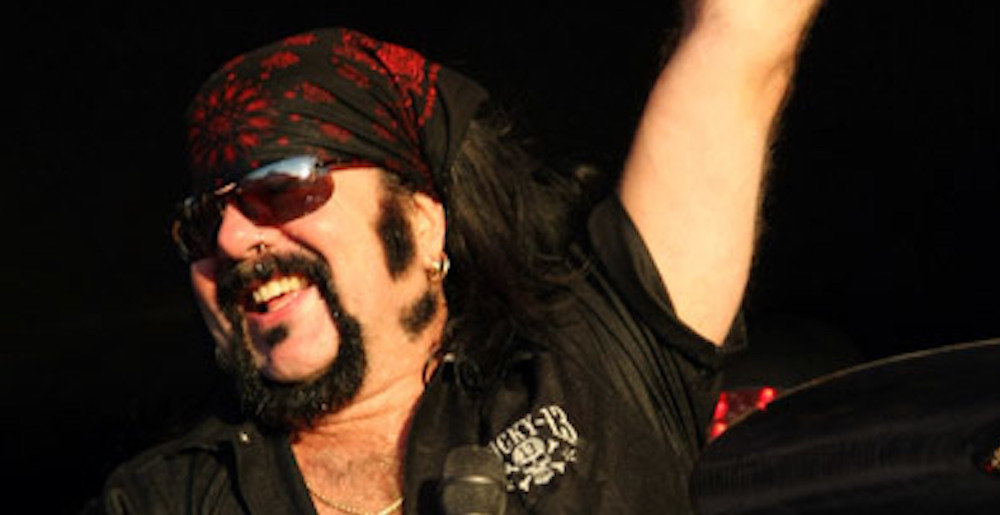 Vinnie Paul by Chicks With Guns Magazine, via Wikipedia.

Vinnie Paul’s Estate to Auction Off His Drum Kits, Personal Items and Collectibles

Back in 2018, the metal world was shocked and saddened to learn that Vinnie Paul Abbot, groundbreaking drummer for Pantera and brother to its late guitarist Dimebag Darrell, had died at 54 years old. Now, Vinnie Paul’s memorabilia and collectibles will be auctioned off via Backstage Auctions.

Here’s what the auction’s press release says will be available:

“This historical auction is the ultimate Vinnie Paul celebration. Among the many highlights are several drum kits from his Pantera, Damageplan and Hellyeah tours including the kit he played last, a collection of guitars, including a vintage Dimebag Darrell Washburn, custom slot machines, every imaginable record award, clothing, artwork, autographed items, home furnishings, photos, posters, and just about every laminated pass ever issued to Vinnie Paul.

“Additionally, Vinnie was a huge hockey, football and baseball fan, leaving behind a massive collection of sports memorabilia with a heavy emphasis on his hometown heroes: The Dallas Stars, The Dallas Cowboys and The Texas Rangers. Highlight pieces include an array of autographed sports collectibles, seats from the original Dallas Cowboys stadium, hockey sticks, helmets, and a massive amount of jerseys.”

A quick look at the auction’s online preview catalog shows the most expensive items being offered are the last kit Vinnie ever played ($25,000), a complete Pearl drum kit used for Damageplan and Hellyeah recordings from 2003 to 2018 ($20,000), a 2012-2013 touring kit for Hellyeah’s Band of Brothers cycle ($20,000), and a 1996 Pantera touring kit for the Great Southern Trendkill cycle ($17,500). How the Pantera drums are cheaper than the Hellyeah drums is anyone’s guess, but knowing how Pantera were back in ’96, one assumes it’s that the Trendkill drums are absolutely beat to shit and caked in dried-up Black Tooth Grin residue.

The auction kicks off this Thursday, May 26th, and ends Sunday, June 5th. More information can be found at Backstage Auctions’ website.

New Stuff 0
The New Drowning Pool Song is a Tribute to Dimebag Darrell and Vinnie Paul
August 5th, 2022 at 10:38am Em Shadows

Reunion Mania 0
Phil Anselmo on Pantera Reunion: “I know Dime and Vinnie Paul Would Want the Legacy and the Name of Pantera to Go On”
August 2nd, 2022 at 11:17am Em Shadows

Anselmo says they would support the reunion.