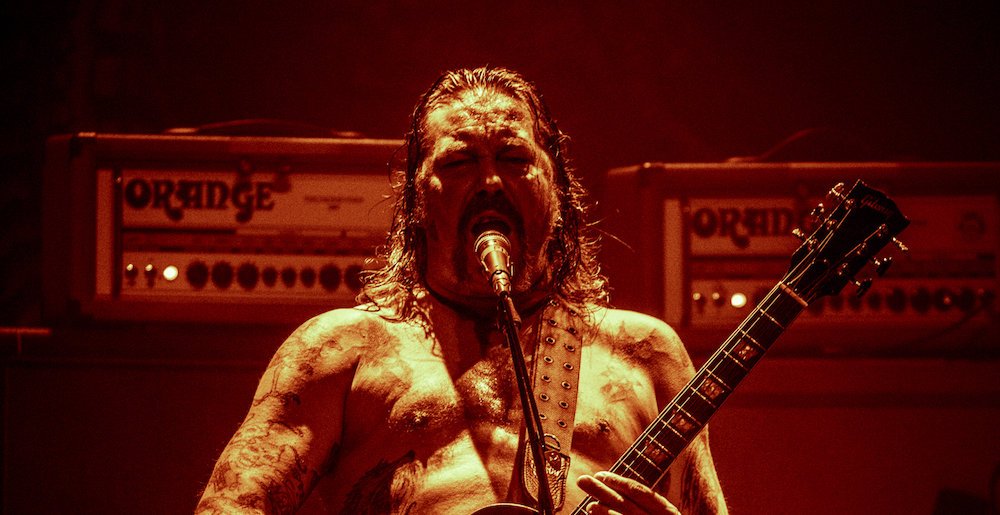 I love the music of Sleep guitarist and High On Fire frontman Matt Pike. His work has been intrinsic in my growth as a metalhead and as a human. But recently, NPR ran a profile on Matt which examines the origins of many of the conspiracy theories he’s known for believing in, or at least entertaining in his work. And given the nature of the article, I feel obligated to discuss it.

The piece, by music journalist Grayson Haver Currin, is titled, “Can Matt Pike Face the Music?” and focuses on how Pike has gone from one of metal’s street-level warriors to an icon of extreme music. The profile is thoughtfully-written, and insightfully examines how a dude famous for being the Patron Saint of Weed Metal is having to cope with the pressures that come with becoming a Grammy-winning frontrunner of the scene. But it also takes an unflinching approach towards Pike’s ongoing obsession with the conspiracy theories of writer and anti-semite David Icke.

Plenty of Icke’s conspiracy theories sound almost amusingly crazy, specifically those about the Illuminati, reptilian humanoids infiltrating society and controlling the Earth, and 5G networks helping to spread COVID-19. However, many of his theories are heavily informed by works like the 1897 literary forgery The Protocols of Elder Zion, which reveals a purported Jewish plan for global domination. Icke has claimed that his work is not aimed at Jewish people, but only at Zionists.

In the article, when Currin confronts Pike with the issues that arise with him promoting Icke’s theories, Pike makes it clear that he’s not a devotee of the author, but a science fiction fan first and foremost:

“I’m not, like, preaching his gospel. I was using the David Icke ‘mythage’ to create a song that had a science-fiction, fantasy motive. I don’t understand how that gets to be not published. If you can’t say an author’s name in an interview, you’re telling me I don’t have freedom of speech. That’s the problem.

“This is why war exists. because they separate us by propaganda narratives.”

Currin says that Pike is increasingly frustrated with “cancel culture” — an article on Bandcamp Daily in which Pike ranked his favorite obscure artists was pulled due to the musician’s association with Icke — and that his obsessions with conspiracy and science fiction stem from a desire to forever live outside the norm:

“Any sort of outlandish thought process that gives you that feeling — ‘Ooh, is that really true or not? Why is it a mystery? Why don’t we know about it?’ — always fascinated me. This is how my mind works. I don’t care if it’s true or not necessarily; I want to hear it out.”

Pike is the first to admit that his love of conspiracies could be tied to the escapism and outsider status he experienced and reveled in during his youth. And later on in the article, when Currin directly confronts the idea of Icke’s anti-semitism, Pike, frustrated, makes it abundantly clear that he does not consider himself a bigot:

“I am not an antisemite. I’m actually not OK if there’s not Jewish people in my life…I’m not a racist. I’m not anything. I’m Matt Pike. I’m trying to make the world a better place through my music.”

However, Currin goes on to say that Pike repeatedly references “Zionist bankers” and “Jewish bankers” in his rants. When discussing Donald Trump and the rise of anti-semitism among American conservatives, Pike says, “[Trump] works for the Jewish bankers. It’s really weird that a bunch of Trumpers would hate on a bunch of Jews.”

Later, when Currin suggests that Jewish people scared for their physical well-being might not be concerned about whether or not a metal star can push anti-semitic conspiracy theories on all platforms, Pike says:

“It’s not just me, but the world’s being attacked. Not to sound like Team America over here, but, yeah, it’s nice to have some freedom. You don’t have the right to stop us from being creative. That’s a lizard-people thing to do, for god’s sake.”

Obviously I, like many of the metalheads I’ve seen reacting to and discussing this article online, find this all incredibly disheartening. Do I think Matt Pike is an anti-semitic militiaman looking to make Jewish people pay for some outlandish global conspiracy? I do not, nor have I ever listened to High on Fire or Sleep’s music and thought that Pike was pushing any agenda other than a love of metal, science fiction, and weed. However, I think it is undeniable that the theories he promotes back up the beliefs of a large number of people who are ready to commit acts of violence, hatred, and bigotry against others based on their upbringing, faith, or nationality. You could argue that this could be the case with any sentiment misinterpreted by violent or bitter people — but this is one that has time, and time, and time again proved bloody and deadly.

You can read the full article on NPR.

Sponsored Links from Across the Internet
Show Comments
Related Articles
Public Service Announcement 0
Get a Big Rip of Sleep’s Dopesmoker Now That It’s Back on Streaming Services
August 26th, 2022 at 5:23pm Hesher Keenan

Light up a doob and chill out to some killer tunes.

We’d advise against rolling the vinyl for smoking purposes.

Metal Sucks Greatest Hits
0 -
Meshuggah’s Jens Kidman is Now a Meme
820 -
Tiberian Vocalizations: Cormorant’s Arthur Von Nagel Gives You The Anatomy of a Record Contract
0 -
The Top Ten YARLERS of All Time
0 -
What If Metal Album Covers Were Truthful?
0 -
BREAKING: Joey Jordison Back in Slipknot as Percussionist!
0 -
Rigged: Wintersun