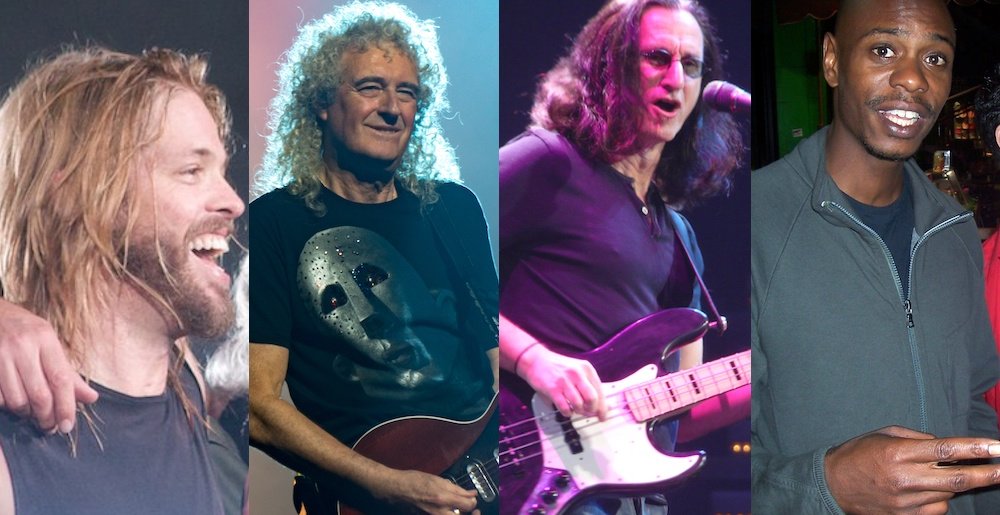 Taylor Hawkins by Stuart Jones, Brian May by Raph_ph, Geddy Lee by Matt Becker, Dave Chappelle by Davej1006, via Wikipedia.

Earlier this month, globe-spanning rock act Foo Fighters announced that they would be taking part in two tribute concerts to honor the life of their drummer Taylor Hawkins, who passed away in April at 50 years old. Now, a list of the musicians set to appear at the London tribute show has been released, and it includes some of the biggest names in rock history.

According to a new flyer posted to Foo Fighters‘ Facebook, the London tribute to Taylor Hawkins will include appearances from the following:

According to the Foos:

“Tickets on sale Friday 17 June at 9am local time.

“The Taylor Hawkins Tribute Concerts will benefit charities in the UK chosen by the Hawkins family. Beneficiaries and further details will be announced shortly.”

More information on the shows can be found via Foo Fighters’ website. To keep up to date with details about tickets, the line-up, and on-sale dates, you can sign up for Foo Fighters’ mailing list.

This will be the Foo Fighters’ first live show since announcing that they would be canceling all tour dates to focus on the grieving process, writing in a statement:

“It is with great sadness that Foo Fighters confirm the cancellation of all upcoming tour dates in light of the staggering loss of our brother Taylor Hawkins. We’re sorry for and share in the disappointment that we won’t be seeing one another as planned. Instead, let’s take this time to grieve, to heal, to pull our loved ones close, and to appreciate all the music and memories we’ve made together.

Everyone at MetalSucks sends their heart out to Hawkins’ family, friends, fans and collaborators. We hope this concert brings them some peace.

Metal Sucks Greatest Hits
0 -
This Very Fat Cat is The Best at Metal Drums
0 -
Ex-Attack Attack! Vocalist Caleb Shomo is Smarter than John Holgado
2780 -
Jumping Darkness Parade: Eyal on Bands That Can’t Duplicate Their Album Live
0 -
Listen to Metallica’s “Nothing Else Matters” in a Major Scale
0 -
This Dude Sounds EXACTLY Like Layne Staley
0 -
G.O.A.T. and Your M.O.M.’s “Quack like a Duck” Justifies Humanity’s Entire Existence