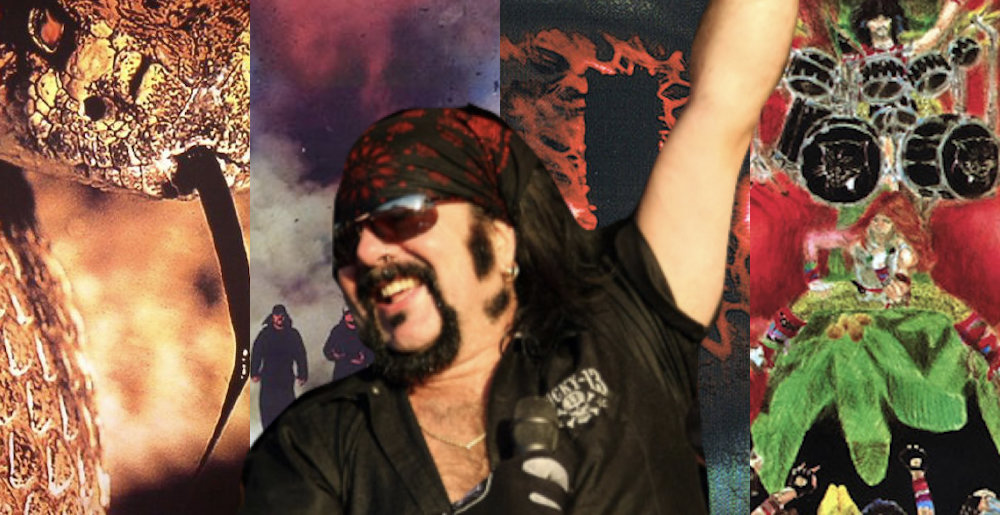 Vinnie Paul by Chicks With Guns Magazine, via Wikipedia.

Sometimes, amidst all the party stories and larger-than-life interviews, we lose sight of how great a drummer Vinnie Paul Abbott was. The Pantera, Damageplan, and Hellyeah skinsman is such a personality that we can think of him as Vinnie fuckin’ Paul first and one of metal’s most prolific and hard-hitting percussionists second. But Vinnie will always be one of the genre’s most legendary rhythm-tamers, backed by a huge catalog of killer tunes showcasing what an amazing musician he was.

Today marks the fourth anniversary of Vinnie’s death. In his memory, we decided to put together a list of some 12 songs from across his career that showcase just how talented and tireless he was as a drummer.

It’s not like the drumming on “Domination” is especially technical or outlandish. It doesn’t make us wonder where Vinnie’s influences came from. Nope, this song just hits, hard, exactly where you want it to hit. Whether it’s the raging thrash opening, the accents between chorus and verse, or the mother of all breakdowns at the end, Vinnie’s always ready to give us exactly what we crave. Steak and potatoes? Fucking delicious.

It’s good to hear that in 2016, Vinnie was still giving it his all. “X” features the drummer filling all the empty space around him with interesting fills and exciting emphases. The song is straightforward, to be sure, and Vinnie never overdoes his crashes or rolls, but there’s still a sense of tight, forceful virtuosity here. Born and bred a metalhead indeed.

Pantera, “The Underground In America” (The Great Southern Trendkill, 1996)

Trendkill saw Pantera doing their damnedest to match the extreme metal underground while shaking the fashionable nu-metal scene that was then blowing up. And while not every aspect of “The Underground In America” ages well – is Anselmo supporting or lamenting that lesbian love is accepted and right? – Vinnie’s drumming remains dynamite to this day. You can hear how the dude is willing to embrace the double bass, but that he never tries to go full blastbeat when he’s so effective as is. An underrated sonic hurricane.

Pantera drew a line “By Demons Be Driven” that’s summed up by Vinnie Paul’s drumming thereon. On the one hand, this is in a lot of ways an extreme metal song, given how hostile and militant its chorus is. On the other hand, the verse is pure southern rock, full of relaxed groove. Vinnie rides down the middle of it, effortlessly moving between good ol’ boy swagger and underground rancor. This would be the asymmetrical face of Pantera for the rest of their career.

New Found Power is an easy record to blow off. But what you can hear on the record is Dime and Vinnie feeling like they have something to prove post-Pantera. On “Fuck You” (which features guest appearances from Zakk Wylde and Corey Taylor), Vinnie loses his shit, throwing down beats that are pure thrash, thick-ass groove, and everything in between. If we didn’t know any better, given how utterly pissed off Vinnie sounds here, we might even assume that the song is aimed at someone the Abbotts knew. A singer, perhaps?

Because Cowboys is the bridge between Pantera’s glam days and their agro era, one often forgets just how hard “Message In Blood” goes. But that song seethes, with bits of classic thrash and death metal thrown into its bubbling musical cauldron. Vinnie’s drumming is especially intense, perfectly matching the rest of the band’s rancor. Listening to this song, it just sounds like he’s hitting that kit harder than he’s supposed to.

Boom da-boomedy boom ba-doom, boom da-boomedy boom ba-doom…Man, you just can’t fuck with that opening roll. Somehow, Vinnie had the ability to make a million kicks, crashes, and smaller hits feel like cogs in one giant tank rolling over the listener. That said, if you listen to “13 Steps to Nowhere” a little deeper, you notice all the killer accents thrown in around that general earth-scorching rhythm. Man, this one’s nasty.

The drumming on “Debt That All Men Pay” starts off almost soothingly, rolling forward with a calm kind of steadiness. And then those chorus parts come in, and Vinnie reminds us that he will always be the kit’s daddy. That one-two maneuver, from hypnotic balance to wily spontaneity, is exactly what made Abbott such a force to be reckoned with. This is the sound of a dude enthusiastically doing what he does better than most people in this world.

You can tell that Pantera decided one track Reinventing… had to be just absolutely nuts, and the result was “Death Rattle.” The song is definitely the album’s most frantic, and so much of that comes from Vinnie Paul. The dude finds the beat here for sure, but also knows that a track like this isn’t supposed to be entirely contained and even-keeled. It’s a special kind of drummer who can turn on the chaos without losing his cool.

No offense to his Hellyeah bandmates, but with a lesser drummer, “Bigger God” would be kind of a typical metal song. The track is cool, but a simple chug-along rhythm would’ve made it just cool. Instead, Vinnie’s madcap rhythms on the chorus take this to a new level, making it a more complex tune than it might have been otherwise. Not a bad way to be, when your involvement makes a song something inherently better.

It’s a fool who ignores Pantera’s “glam” albums, and “Out for Blood” is a reminder of why. The track is filled with speed-metal prowess, including Vinnie Paul’s awesome thrash drumming. On this one, you can hear the beginnings of Abbott’s incredible talent emerging, locking him in as a drummer to beat in an emerging phase of metal’s development. Thank God his dad took away that tuba.

Metal Sucks Greatest Hits
820 -
Rigged: Dream Theater’s Mike Mangini Takes You Through Every Piece of His Mega-Drumkit [Part 1]
0 -
Deicide’s Glen Benton Sells Out, Tells Fans to Stop Moshing So Violently
0 -
Watch: Bruce Dickinson Rips On Fan for Smoking Weed at Iron Maiden Show
0 -
Missed Connections: You Puked at the Ulcerate Show (M4M – Brooklyn, NY)
0 -
Video Footage of Emmure’s Frankie Palmeri Getting Electrocuted On Stage in Russia
0 -
Why are metal fans hopelessly stuck in the past??? :(