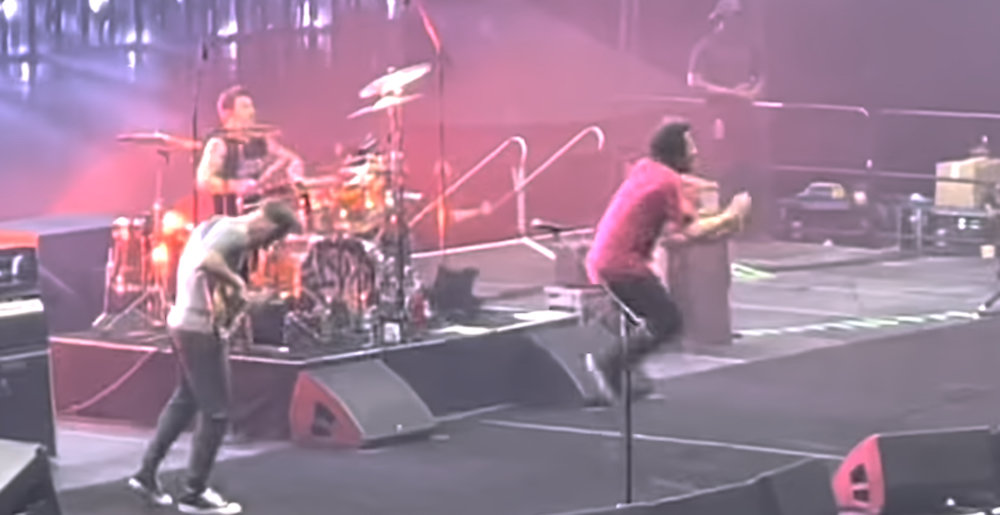 Right now, Rage Against The Machine are performing for the first time since 2011 on their long-awaited reunion tour. However, the band hit a snag at last night’s show in Chicago when frontman Zack de la Rocha injured his leg, and was forced to finish the band’s set seated on a monitor.

As you can see in the fan-shot video below from YouTuber Caleb Crockett, midway through performing “Bullet In The Head” (at about the 3:26 mark), Zack jumps in the air and leaps around the stage. Then, all of a sudden, Zack is very still, crouching, and, upon the next chorus, hopping a little. Then, in a video taken by YouTuber The Pistol777, we can see that Zack performed “Testify” from while seated/leaning on a monitor. If we had to guess, the dude landed wrong on those jumps during “Bullet…” and is now having a tough time.

Anyway, our best to Zack, and we hope he makes a speedy recovery. Catch RATM live, perhaps with less jumping, at one of the following dates:

Metal Sucks Greatest Hits
8850 -
The 101 Rules of Nu-Metal
2760 -
Who Are The Top Ten Lyricists?
0 -
The 110% Totally True Confessions of a Left-Wing Conspirator
0 -
Joey Jordison Claims He Was Fired from Slipknot Via a Singing Telegram
0 -
Editorial: True Loyalty Means Admitting When Your Favorite Bands Suck
0 -
Meet Ironbunny, the New Babymetal