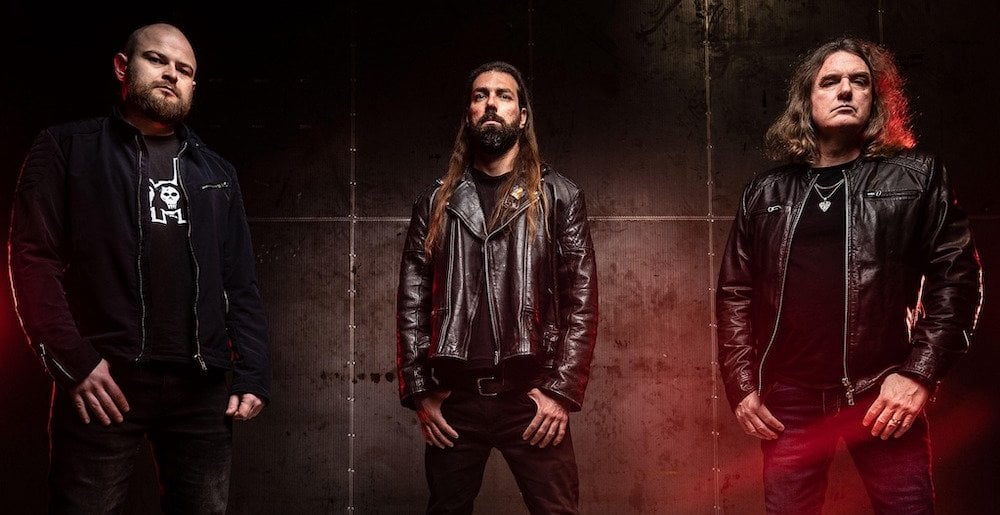 Last year, bassist David Ellefson was fired from thrash legends Megadeth due to a sex scandal emerging online. But now, Ellefson is back with a new death-thrash band named Dieth — sort of like Diet Deth, we guess? Oh, or maybe like Shakespeare, like, He dieth not in vain — and has dropped the first single with the band, which you can hear below.

As reported by Blabbermouth, rounding out Dieth’s ranks are guitarist/vocalist Guilherme Miranda (formerly of Entombed A.D.) and drummer Michał Łysejko (former of Decapitated). The band are based in Gdansk, Poland, and…

“…pushed beyond the stereotypes of their genres to create a charismatic new sound, one which is rich with inventive guitar riffs, tight drum grooves, technical prowess, guttural vocals and catchy melodies, serving as the passageway for their new declaration.”

Says Ellefson of the project:

“The three of us have all been recognized in our respective bands and careers but at some point, we had to close the door on those exploits to let something new begin and now we have found it in Dieth. In fact, the name itself is about dying to one’s past so that something new can spring forth to create the next chapter of life. And that is a connection the three of us hold in common.”

“It has been so much happening lately (in life),feeling the need to express ourselves accordingly. Create something new, have a fresh start. Personally, it was a matter of life or death to come back playing music. To do something truly meaningful and finally cope with the anger and grief. Sometimes you have to die inside to be reborn. This is what Dieth represents, a new sonic driving force that leave the past behind.”

The band’s first single, “In The Hall of the Hanging Serpents,” below. The track is a pretty solid mid-paced death metal song, and video has plenty of blood in it, so hey, kudos to these guys, let’s see what they do!

F-F-F-Feudin' 0
David Ellefson Comments on Megadeth Firing (Again): “He’s Obviously Not Gotten Over This Thing About Being Fired from Metallica”
September 6th, 2022 at 9:49am Em Shadows

He says his relationship with Mustaine was abusive.

Everyone's Replaceable 0
Mustaine on Firing Ellefson: “I Just Couldn’t Have That Around Us”
September 1st, 2022 at 10:46am Em Shadows

He has high hopes for the future with the band’s new lineup.

Metal Sucks Greatest Hits
0 -
Report: “The Number of Heavy Metal Bands in a Given Country is Associated with its Wealth and Affluence”
0 -
What in the Mother of F*CK Did I Just Watch???
0 -
I, For One, Welcome Our New Robot Overlords
0 -
Gwar’s Oderus Urungus Reviews Megadeth’s “Super Collider”
0 -
Editorial: The Metal Community Must Stop Letting Phil Anselmo Off the Hook for His Racist Remarks
0 -
Twenty Photos of Mitch Lucker’s Last Days, Taken From His Instagram Account