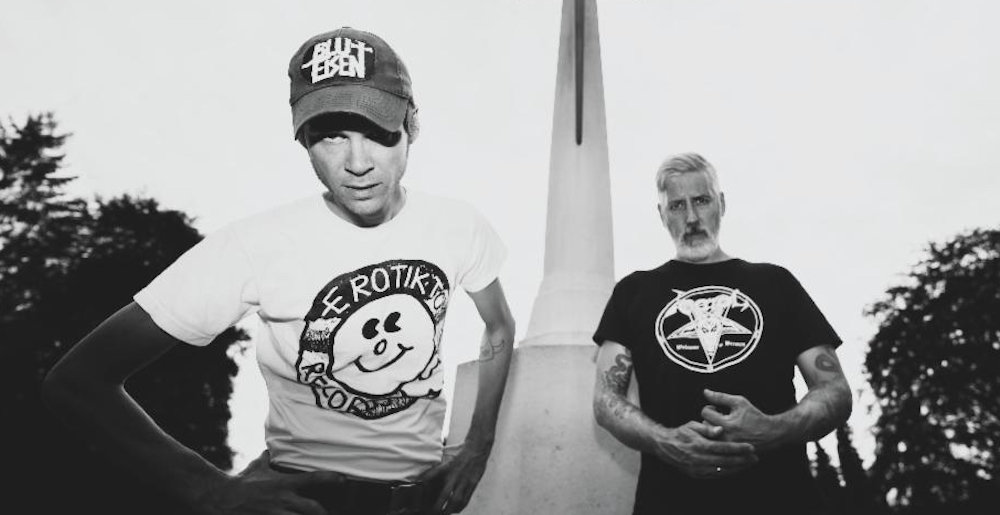 By December of 2020, things were finally starting to look up for Hanno Klänhard. During his last trip home to Germany to work with drummer Erinç Sakarya on the latest album by their band Mantar, the guitarist and vocalist had torn the meniscus in his knee, resulting in surgery and the financial strains that come from not having health insurance abroad. Now, back in Deutschland at Christmastime, Hanno had a chance to accomplish what had been robbed from him earlier that year.

On Christmas Eve, Hanno slipped in a supermarket and tore his ACL in the same knee. More surgery, unbearable pain. Mantar were fucked. Again.

“After two weeks, we had to give up,” says Hanno as though he can barely believe it. “The pain was too high. It felt for the first time like a dead end. For the first time ever, we felt as a band that we didn’t have what it takes anymore. Because the universe worked against us. The stars aligned against us.”

Given the two years that went into making it, the fact that Mantar’s new album will see the light of day this Friday is a miracle. But what didn’t kill Hanno and Erinç made them deadlier, and the band’s fourth proper studio album, Pain Is Forever and This Is The End, is a triumph, and sees Mantar wielding a new outlook and an undoubtedly steadier hand.

Up until Pain Is Forever, Mantar’s story has been one of unstoppable momentum. The duo’s 2014 debut Death By Burning instantly vaulted them into the extreme music spotlight, endearing fans from around the world to this unhinged, ache-driven racket that was somehow made by only two dudes. Two more full-lengths followed, 2016’s Ode to the Flame and 2018’s The Modern Art of Setting Ablaze, with a covers album, Grungetown Hooligans II, landing in 2020, right before the pandemic hit.

And yet, for all the acclaim heaped on them in such a short time, Hanno admits that he thinks that Mantar got shoehorned into a niche that was too narrow for them. “I don’t want to hide anymore behind the label of being an ‘extreme metal band.’ We’re still an extreme band, but we’ve never been too much of a metal band. I grew up with metal, but when we started, Erinç didn’t know the difference between black metal and death metal, or how to play a blastbeat. He still doesn’t, and it doesn’t matter.

“Sludge this, doom that, crust this,” he says, shaking his head. “Honestly, a lot of the references made about us, we don’t even know.”

When it came time to follow up Grungetown Hooligans, Hanno wasn’t sure he wanted to play the game anymore. He called up Erinç and asked him a question that he thinks more bands should consider: was there anything left to say?

“We’re a punk band at heart, so we never make long-term plans,” explains Hanno. “In late 2020, I called up Erinç and said, Hey, do you think we should make another album? I think bands should have that honest discussion more often – is there a need for another album? Can they offer some good shit anymore? A lot of bands, I think, release albums more out of habit. That’s never how I felt. You form a band, put out one demo, you split up. Keep the scene alive. Make progress. Stay in motion.”

Erinç thought the band had another one in them. Hanno went to Germany to work with him. A year and two injuries later, Hanno could barely walk.

Look at Mantar’s discography and you’ll notice a recurring theme behind all of their previous albums: fire. Whether it’s burning, the flame, or setting ablaze, Mantar were a band obsessed with conflagration and heat. But as Hanno and Erinç decided to somehow move forward with their ill-fated record – “Erinç said, ‘I’m cool that the band is over, but I cannot accept the way this ends, if the band ends, it’s on our terms” – Klänhard decided that the fire was officially out.

“That story has been told,” he says. “I wanted to open up a new chapter with this record, because I had to. The first three albums, I popped ‘em out like nothing, like this.” He spins his hand, snaps his fingers. “This album is a lot more serious in an emotional context. That’s also why the sound is a little bit different. I wanted to dare a little bit more. I grew up on classic rock – Thin Lizzy, AC/DC, ZZ Top – and punk rock, of course. I threw tons of material away. Whenever it started to feel like, Oh, great, a sludgy tune! Great doom riff! I got rid of it. I wanted to concentrate on catchy songs. You don’t need much. You need a good riff or two. Get to the point. I like ‘Ace of Spades.’ I like ‘Highway to Hell.’”

Those references might make the process sound fun, but for Hanno, writing and recording Pain Is Forever was exhausting. Not only was he attending physical therapy to deal with his leg, but his confidence was shaken from having his creative momentum stopped dead — twice.

“Writing this record, it was heaven and hell,” he says. “It was imposter syndrome. In the morning, you wake up thinking you just wrote a great song; in the evening, you would go to bed thinking, This whole band sucks, and it always sucked, and one day they’re gonna find out. Erinç kept saying I had to trust him, the songs were great, but nothing, NOTHING was fun about this record. Nothing came easily, and everything that could go wrong went wrong. The name was, in the beginning, a cynical joke, a working title. But then I thought, This is spot on. This is what this album is.”

As the band’s producer, Hanno decided that if things were going to be hard, they had to be done right. After catching himself writing riffs that sounded too much like ones he’d recorded before, he set out to give each song its unique sound. Locked up in his home studio in Florida, he put himself through the ringer, one track at a time.

“After every song, I set the mixing desk back to zero,” he recalls. “I’d pick a new guitar, new amp, new microphones. I had a vision of the song in my head, and based on that I chose the ingredients. I’m a gear nerd, and I love that stuff, and I have a huge wall of amplifiers and several hundred distortion pedals. That’s the only thing that was a little satisfying here and there with the recording process. I think the songs deserved that. You can’t record a song like ‘Piss Ritual’ with the exact same sound as a song like the last one, ‘Odysseus.’”

Listening to Pain Is Forever and This Is The End, one can hear both the care and the utter misery that went into it. The record is not the lightning-fast mugging of its predecessors, but the chuckle of the brawler still standing after having their face rearranged. Satisfying paeans to ugly truths dig deep into the human soul while remaining consistently easy on the ears. The first single, “Hang ‘Em Low (So the Rats Can Get ‘Em)” would be melancholy if it didn’t spit blood in your face, “Orbital Pus” is a rip-roaring anthem with a nasty left hook, and “Walking Corpse” gives old-school death metal the lopsided grin it never allowed itself in the past.

Speaking to me from his home in Florida, with the album’s gauntlet behind him, Hanno is good-natured and hilarious. When I ask him how his knee is doing, he tells me he just got back from working on it at the gym, adding, “If you don’t move your leg for a while, it’s gonna look like your fucking arm!”

His humor is hard-earned, on more than one level. If the process behind Pain Is Forever and This Is The End had been any easier, the album might not be so awesome; if the final product was lackluster, the rigamarole leading up to it would’ve felt tragic and unnecessary. As it stands, the record is an enthralling but mature blast of utter catharsis — basically, a new take on everything that has always made Mantar so exciting.

“I’m proud now because I finished it, and it’s good,” sighs the guitarist. “I put it on my wall, like a deer or a fucking bear. Conquered. I don’t listen to it, and I don’t want to, but it did not manage to kill the fucking band. This album was the end boss. It almost had us down. Which is kind of funny, because it’s the catchiest album we’ve ever done. But it’s still so dark. Down in its core, in its DNA. It’s pure darkness.”

Mantar’s Pain Is Forever and This Is The End drops July 15th via Metal Blade, and is available for preorder.

Sponsored Links from Across the Internet
Show Comments
Related Articles
Br00tal-lists 0
11 Metal Duos That Challenge Our Perception of Heavy Music
September 15th, 2022 at 11:16am Em Shadows

The German duo are going anthemic as hell here.