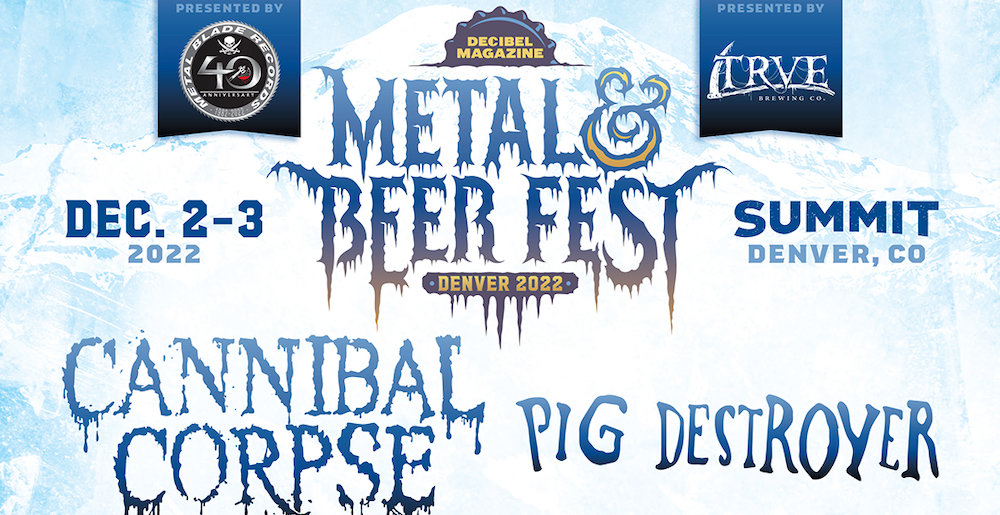 Just last month, Decibel Magazine wrapped up their Metal & Beer Festival in Philly, with performances by Cannibal Corpse, Nuclear Assault, The Red Chord, and other incredible acts. Now, America’s only true metal magazine has decided to take things higher, louder, and sudsier than ever before by hosting a new incarnation of the Metal & Beer fest in the ultimate craft brew city: Denver, Colorado!

Yup, on December 2nd and 3rd, Decibel will move its West Coast version of the Metal & Beer Fest to the Mile High City for the first Denver edition of this tipsy free-for-all. The fest goes down at Summit Music Hall, and will be presented by Metal Blade Records and local unfuckwithable metal brewery Trve Brewing.

“When we were approached to be the Presenting Brewery for Decibel’s Metal & Beer Fest, it was a complete no-brainer. After a couple of years of having to sit out this festival for a variety of reasons, we are excited to be able to participate, and equally excited to show all the bands, breweries and attendees what Denver hospitality is all about. We’re ready for the maniacs to descend on the Mile High City!”

And who’s playing? Well, shit, you can’t go wrong with Cannibal Corpse and Pig Destroyer as your main draws! But don’t worry, that’s just the tip of the iceberg — this year’s festival will also include:

Tickets for the show go on sale this Friday, July 22 at 10am Mountain Time, and will come in two forms:

“Just Metal” Ticket (21+) – Admittance to the day’s event, but as the name suggests, you just get to see the show—no beer samples (You can still buy select beers a la carte if you’re 21+).

What more is there to say? Get ready to get trashed in a low-oxygen environment!