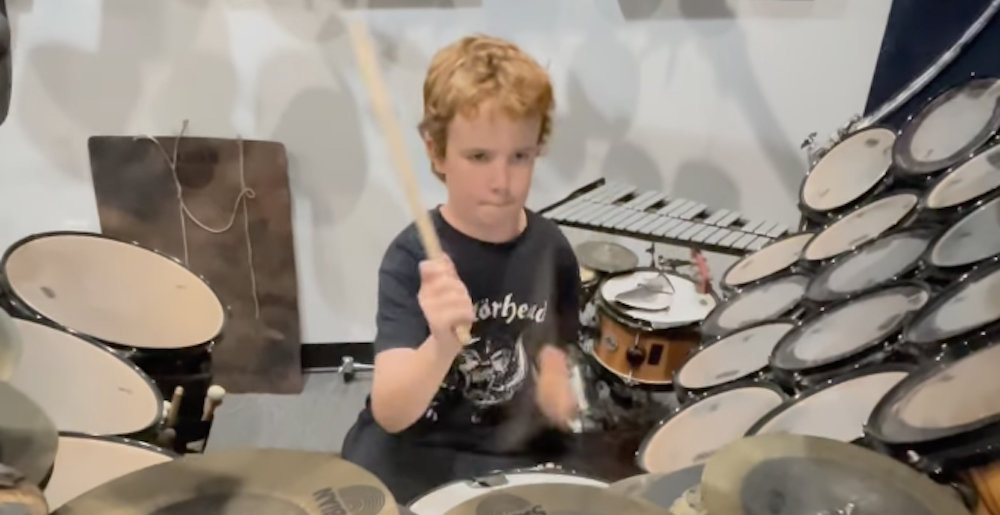 Born In a Mosh: Revel Ian Talks About His Band Honeybee, His Favorite Extreme Metal Act, and the Music His Dad Hates

When you hear about people going into the family business, it’s usually something kind of stuffy, like dentistry or law or the ol’ Bailey Building & Loan. But for Revel Ian, following in the family’s footsteps is a noisier affair. The son of Anthrax guitarist Scott Ian and the grandson of bombastic rock singer Meat Loaf, Revel is no stranger to artists performing heavy music at an elite level. That said, the guy is more than up to the task, becoming an Instagram celebrity by jamming classic metal songs with his father and releasing an album with his band Honeybee — both of which are impressive feats even if you haven’t just turned 11 years old.

Between watching him rip through Sepultura fills on our feed and enjoying the crap out of Honeybee’s debut album, we decided to reach out to Revel for an interview. Here’s what the Prince of Stomp told us…

Your band Honeybee released their debut album this year. In your words, how’d the band come together?

Liam [Williams, vocals and guitar] has a little sister, and she used to go to school with me. She sang and I played guitar at the time, which I still do, but I was more into it then. And I was getting tired of it one day, so I just hopped on the kit that was down in our rehearsal room. At the time, Liam was looking for drummers – he was taking guitar lessons, and decided he wanted to be in a band, that he was ready. So he came down and we jammed our first song, “Heart’s Losing His Mind.” Liam’s classmate was our bass player Theo [O’Gara], so we all got together. I was eight at the time, and when he first saw me, he thought I was gonna be some little kid. And I blew his mind — I did this insane fill, his eyes bugged out and his jaw dropped down to the floor. So yeah, we’re Honeybee.

Where’d the name come from?

I was just writing down a bunch of names on a list. We’d been together for two months with no name. And ‘Honeybee’ is actually a thing my mom used to call me when I was a little kid. So we just named our band Honeybee.

Did you have a specific sound in mind for the band, or did you guys just jam around?

We were just jamming, and just came up with our sound. We never meant to be a specific type of music.

Honeybee have a bit of a chiller sound, but you also play some heavy stuff with your dad online. Do you have a preference for the more relaxed stuff, or the ulta-heavy stuff?

When we first started Honeybee, we just started jamming and finding our sound. But right after we started it, I got really into Korn, and then I was showing them all of these weird chords and stuff, but they didn’t work for us. And, I mean, I grew up with my dad, and my first show ever was the Big Four at Yankee Stadium when I was three months old, so hearing Slayer at three months old…yeah. I just love metal. It has a special place in my heart. I don’t get to play it that much in Honeybee, and it’s definitely a different thing than what we play in Honeybee. And I love playing it with my dad, because I don’t have anyone else to jam it with.

Who’s a band you love that are straight-up extreme? Like, that your average metalhead might be surprised to hear you’re into?

I love Igorrr. That’s about the most intense, heaviest thing I’ve ever heard. They mix opera with blastbeats, and that’s awesome! It’s like really, really heavy Mr. Bungle. Do you know the song “Very Noise?” I tried to play the beginning of that one, but it’s very difficult. I also tried to play guitar to their song, and it’s very challenging. The bass player of that band probably has broken fingers after every show!

Is there a piece of music or a performance that you think best represents where you’re at right now?

I feel like “Get Out of My Head” is a song that really shows off what kind of drummer I am. That and “Better Days.” Those songs just show where I’m at.

Similarly, is there a song you guys recorded that was tough for you? That, afterwards, you thought, I’m glad THAT’S over?

We did all the drum tracks in three takes, and the song that was tough was “Wake,” because it’s just kind of a weird rhythm, and with the chorus, you kind of have to switch hands…I was just trying to make everything sound perfect. That was probably the most challenging song. Definitely broke a sweat.

What’s the deal with the ultra-metal track “Spicy Meatball?“

We were trying to do a cheesy metal song, just because we wanted to a do a phone prank. We’d just call our friends and play that song as loud as we could. We played it live the first time we ever played, and people seemed to like it, so we kept it.

Finally, I have to ask: does your dad ever suggest stuff for you two to jam on where you have to say, That’s some old-man poser music?

It’s the other way around! Usually, I bring him stuff where he’s like, ‘Nah.’ I remember…I’m sad to say this, but I had a Limp Bizkit phase for a month, where I would only listen to them. I’d play them in the car, and he’d just hate it. Also I loved the bad era of Red Hot Chili Pepper,s where the lyrics just don’t make any sense. But hey, we both love Turnstile.

Metal Sucks Greatest Hits
0 -
A Sh*tstain on the Ass of the Universe, #28: Lie or Liar
370 -
Rigged: Devin Townsend’s Massive Live Rig, Piece By Piece
0 -
Etienne Sin: What the Actual Fuck
0 -
Chad Kroeger and Avril Lavigne Finally Wrote a Song So Awful that the Internet Has Collectively Rejected It
0 -
Just in Time for Passover: Big Four Yarmulkes?!?!
0 -
A Detailed Analysis of Slipknot’s New Masks