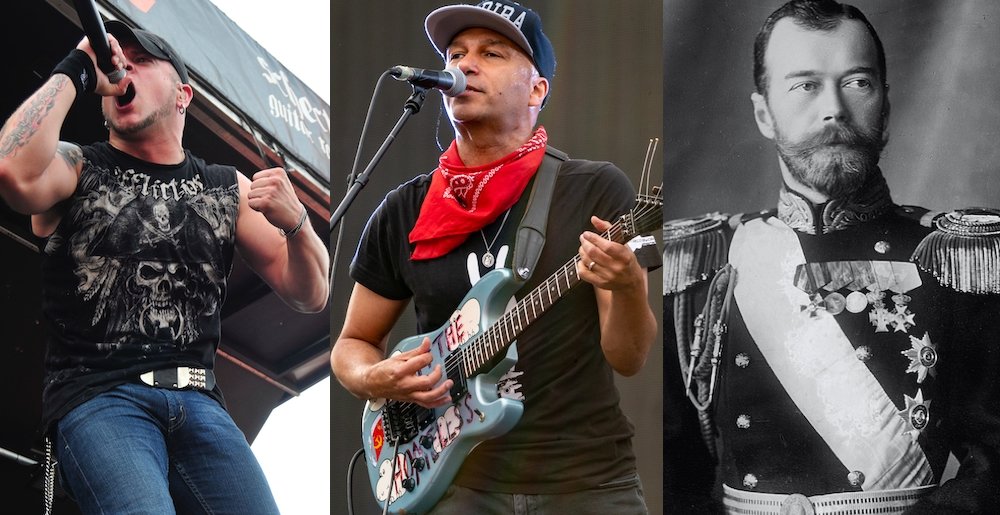 All That Remains’ Phil Labonte Is Furious That Tom Morello Disrespected…the Romanovs?

In case you were unaware, Rage Against The Machine‘s Tom Morello is a vehemently liberal guitarist who dabbles with extremist language and imagery, and All That Remains frontman Phil Labonte is the kind of libertarian whose above-it-all take allows him to never have to have an actual stance or opinion (but whose public statements make it clear that he’s a big fan of homophobia and gun worship). Now, the former has slammed the latter for promoting a quote by Communist revolutionary Vladimir Lenin, and is enraged that Morello disrespected…the Russian royal family?

Okay, so, here’s a little backstory: in 1918, the Russian Imperial Romanov Family was brutally murdered by Bolshevik revolutionaries after a long period of house arrest and cruel treatment. Tsar Nicholas II had been overthrown due to his lack of sympathy with the people of Russia and his inability to provide decent living conditions for them (this is a very, very glossed-over description of Nicholas’ leadership and the conditions that led to his execution, so do some reading of your own). Of course, the Tsar was pretty much just doing what royals had always done, and his family were innocent. Their execution by gun and bayonet is believed to have been ordered by Lenin himself.

Anyway, what does this have to do with metal? Well, Tom Morello has a signature Jim Dunlop Cry Baby Wah pedal, and on the side it reads reads, “Sometimes history needs a push,” a quote attributed to Lenin. Labonte, who had already tweeted about the anniversary of the Romanovs’ executions by saying, “Communists are ontologically evil,” then went after Morello:

“Oh, Jim Dunlop sells a Tom Morello wah pedal with a Lenin quote on it. It says ‘sometimes history needs a push.’ The murder of this family was one of those pushes.

“Wonder how much money Morrelo makes off of the capitalist expropriation of workers in 3rd world countries that manufacture this pedal.”

So, here’s the thing: if Labotne actually gave a shit, he’d say that the Romanov government was a shitshow in which the royals lived well and the everyday people of Russia lived in unspeakable poverty, which is how revolutions — even violent, horrific revolutions — start. Where’s the love for all the Russian parents who watched their babies die of starvation in their arms? Where’s the tweet about how Nicholas II was an avid anti-semite, or the one which says that believing yourself to be a second cousin of God who’s better than everyone is ontologically evil?

So Phil is just angry at liberals. And I mean just angry — not doing anything about it, not supporting important causes, not offering alternatives, and not actually communicating what went on in history. He’s just giving his followers a chin-stroke emoji. Because arguing that Morello’s use of a Lenin quote is fucked up is one thing, but pouring your heart out for a monarch you never met who wouldn’t have given a fuck if you’d lived or died is just ridiculous.

Check out Phil’s dumbass tweets below:

Metal Sucks Greatest Hits
0 -
Exclusive Interview: Damien Echols of The West Memphis Three on His Life After Death
250 -
Worst Year Ever: All of Our 2011 Year-End Sh*t in One Place
0 -
Video: Dudes Rockin’ Out to Van Halen Meet David Lee Roth, Have No Idea Who He Is
8790 -
The Top 39 Annoying Things That (Local) Bands Do
2860 -
What is the Best Christian Metal/Hardcore Band???? [you’re moshing 4 Christ]
0 -
Twelve Reasons Babymetal are the Single Best Thing to Happen to Metal in the Past Decade