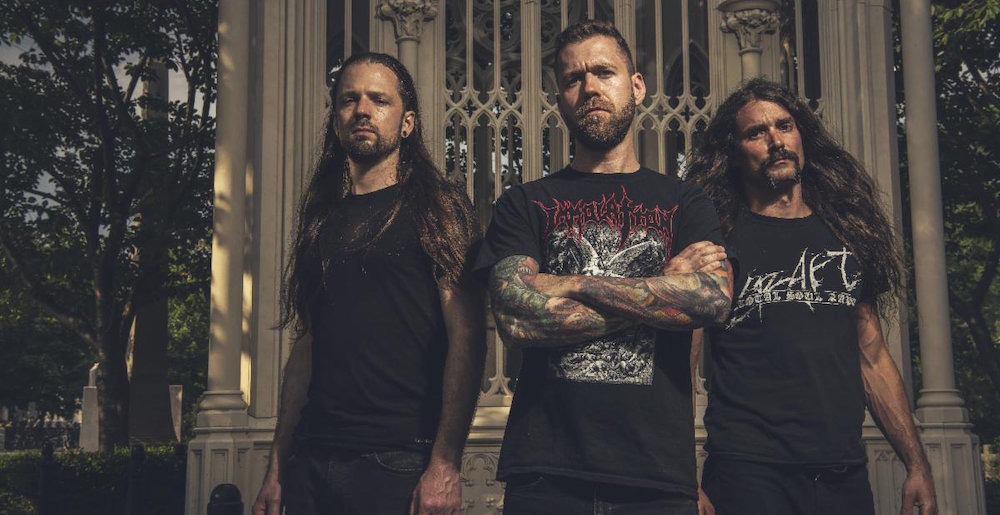 We’re just a month out from Revocation’s next album Netherheaven, but the boys from Boston felt it was fitting to release a new track today to satiate the masses. The track, titled “Re-Crucified,” features guest vocals from Cannibal Corpse frontman and claw machine aficionado George “Corpsegrinder” Fisher, as well as the late Trevor Strnad, of the Black Dahlia Murder.

“Re-Crucified” is the album closer on Netherheaven and frontman Dave Davidson says that it serves as a departure from how the band usually ties up their records.

“Normally we tend to close our albums with a more epic style of song, but with this record, I wanted to go in the opposite direction and end with a complete ripper. Inspired by ‘Dante’s Inferno,’ this song is meant to feel like a journey through hell, and due to the story-like nature of the lyrics, I enlisted the vocal talents of Trevor Strnad and George ‘Corpsegrinder’ Fisher to aid in our journey into the abyss.”

Naturally, as a new piece of music featuring Strnad’s vocals, Davidson says the track stands out as a high point for the record. Trevor tragically passed away back in May, leaving an indelible mark on metal in his wake.

“Tragically, I received word of Trevor’s passing immediately after we had finished filming the music videos for Netherheaven, and I was completely devastated by the news. Trevor was a close, personal friend of mine, and his passing was a terrible loss, not only for myself, but for the entire metal community. I’m proud that I could be a part of Trevor’s immense and storied legacy in some small way. His performance along with George’s are two of the highlights of the record for me. Rest in power Trevor, you will be sorely missed but your legacy will never die.”

After the release of “Diabolical Majesty” last month and now “Re-Crucified” today, we’re completely stoked for Netherheaven, which is set to drop on September 9th via Metal Blade Records.

Check out the track list and album cover art for Netherheaven, as well as a full list of upcoming tour dates, after the track below.

Revocation hits the road on Sept. 9, so be sure to catch them on one of the following dates:

Sponsored Links from Across the Internet
Show Comments
Related Articles
New Stuff 0
Revocation Have Us Seeing Red with “Nihilistic Violence”
September 11th, 2022 at 9:00am MetalSucks

Metal Sucks Greatest Hits
2510 -
Rose Funeral: The Uno Incident?
0 -
L.A. Band Threatin Faked a Fanbase To Land a European Tour No One Attended
0 -
Op-Ed: Metal Vocalists Have Become Irrelevant
0 -
Verax’s Terrible “Time Wasters” is a Great Waste of Time
0 -
David Lee Roth on Van Halen Brothers: “We Have Always Hated Each Other”
0 -
Footnotes: A Handy Catalog of Every Song from Which Avenged Sevenfold’s Hail to the King “Borrows”