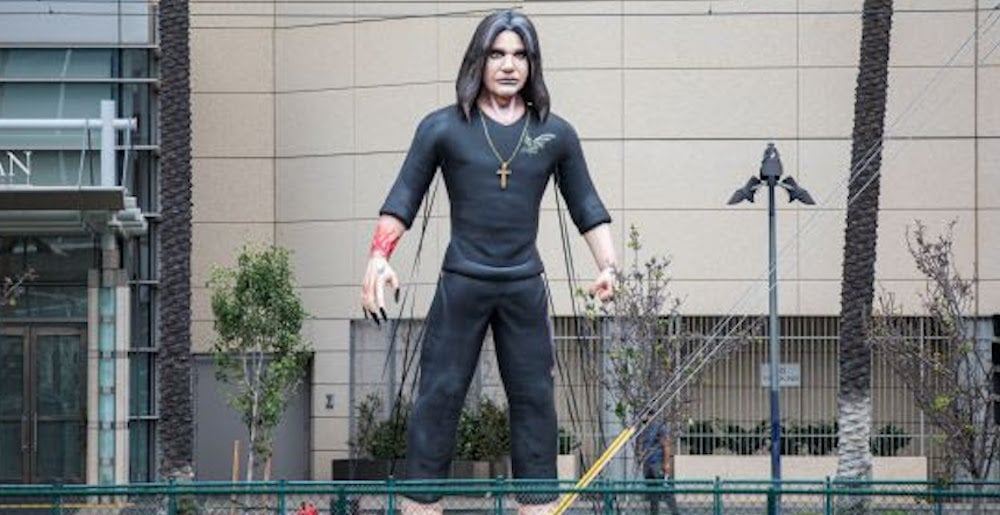 With San Diego Comic Con now behind us, you might assume that you’re safe from the 25-foot tall inflatable Ozzy Osbourne designed by legendary comic artist Todd McFarlane. But you’d be wrong — especially if you live in one of the stops along its month-long tour across the country to support the upcoming release of Patient Number 9.

Ever the enigmatic figure, the wacky inflatable Ozzy‘s whereabouts will sometimes be planned in advance, like some upcoming dates at the Sturgis Bike Rally on Aug. 12 and 13. However, the ever-enigmatic facsimile of the “Prince of Darkness” will sometimes only reveal his next appearance 24 hours in advance. Its trip will culminate in a final showing in New York City on the week of the album’s release on September 9.

At each stop, fans can stop by the inflatable Ozzy to potentially win merch and take photos with it and the Ozzy Osbourne ambulance. One “lucky” fan will even get to win the air-filled behemoth for their home.

Ozzy hasn’t been away from the spotlight in recent days. Most recently, he was seen reuniting with Tony Iommi in Birmingham, England to play “Paranoid” at the closing of the city’s Commonwealth Games.

Patient Number 9 was produced by Andrew Watt and is the Rock and Roll Hall of Famer’s 13th solo album. Along with his regular band, Ozzy’s next LP will feature contributions from guitarists Jeff Beck, Eric Clapton, Mike McCready of Pearl Jam, and Zakk Wylde. Chad Smith and the late Taylor Hawkins will hold down the album’s rhythm, along with bassists Robert Trujillo of Metallica, Guns n’ Roses’ Duff McKagan, and Chris Chaney of Jane’s Addiction.

Patient Number 9 will come out on September 9 and is currently available for preorder via Epic.

Not to be outdone, the actual Ozzy Osbourne is expected to hit the road next year, with tour dates throughout Europe. The slate of dates is being billed as his final farewell tour, though we’ve already seen that song and dance a couple times before. Still, Ozzy’s on schedule for the following dates:

Metal Sucks Greatest Hits
0 -
L.A. Band Threatin Faked a Fanbase To Land a European Tour No One Attended
0 -
Carcass’ Swansong: A Newbie’s Retrospective Review
0 -
A MetalSucks Exclusive: Return from The Graveyard — King Diamond on His Near-Death and New Life
0 -
And Now, Here’s a Couple of Dudes Playing Slayer on Pre-School Instruments
0 -
Who are teh “BIG FOUR SCENE BANDS”????
0 -
Etienne Sin: What the Actual Fuck