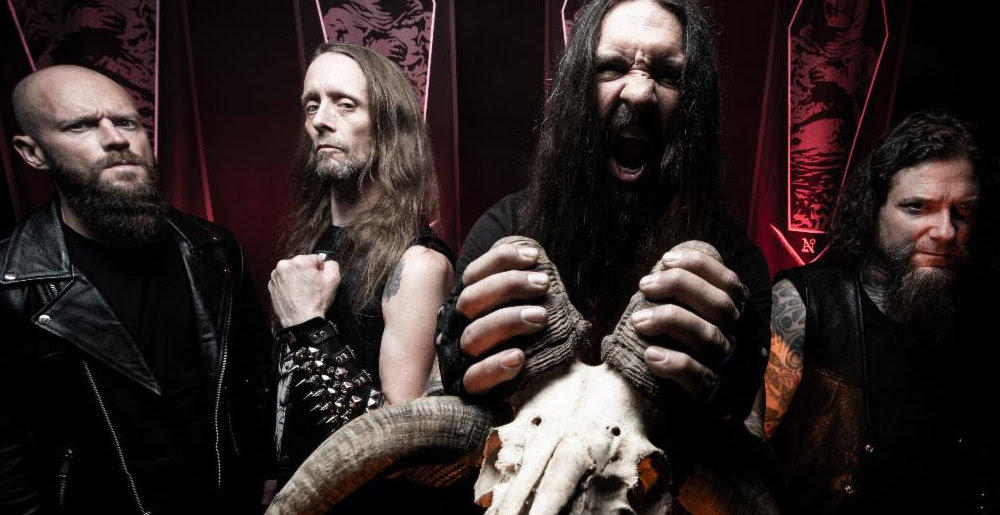 Blackened death metal outfit Goatwhore have been one of the underground’s most dependable and bands for 25 years. The long-running quartet will celebrate that milestone with a new album, Angels Hung from the Arches of Heaven, in October. Today, you can listen to the gnarly second single, “Death From Above.”

When the album was announced, Goatwhore vocalist Ben Falgoust explained the record’s concept as such:

“It’s a mixture of esoteric ideas and biblical scripts; the rise and fall of the self and how the abyss can be a turning point for some and a passageway to oblivion for others.”

“Welcome to the manifested curse of our latest offering. During the past five years since our Vengeful Ascension release, entwined with a state of isolation within that period, we have been communing with our inner abyss for inspiration. Idle time is truly the Devil’s workshop. Feast your eyes (and ears) on this latest display of chaos, which is but a fragment of our impending full-length release out in October!”

Guitarist/vocalist Sammy Duet—Goatwhore’s other remaining original member alongside Falgoust—spoke more toward the musical stylings on Angels Hung from the Arches of Heaven, which, if you couldn’t tell, sounds like another high-quality record from one of the genre’s most-consistent bands.

The whole shebang drops via Metal Blade on October 7.

Angels Hung from the Arches Of Heaven track listing:

Sponsored Links from Across the Internet
Show Comments
Related Articles
News 0
Billboard Tells Us What We Already Know: Goatwhore’s Latest Album is a Top Release
October 21st, 2022 at 10:15am Hesher Keenan

New Stuff 0
Revel in Goatwhore’s Special Brand of Blasphemy with the “Angels Hung From The Arches of Heaven” Video
October 11th, 2022 at 3:55pm Hesher Keenan

Check out this killer new video for Goatwhore’s latest single.

Interviews 0
Goatwhore’s Sammy Duet on the New Record, Surviving 25 Years of Metal, and Recording in a Swamp
October 5th, 2022 at 2:13pm Mandy Scythe

Goatwhore’s Sammy Duet shares his thoughts on the new record and achieving longevity in the metal world.