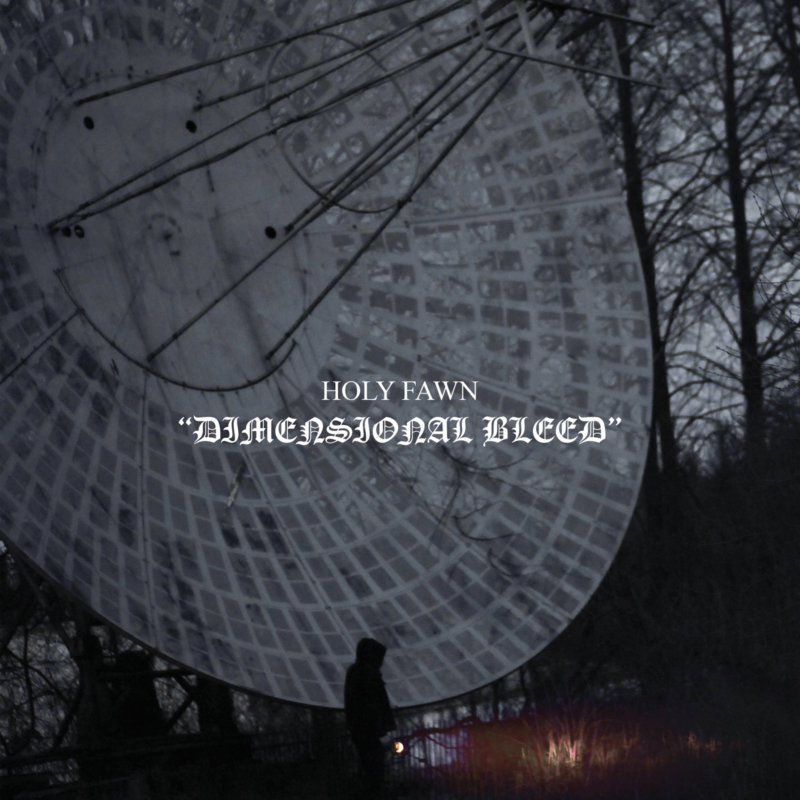 Even a description like “Deafheaven playing Sigur Rós” feels like a simplification of what Holy Fawn does. From the raw dreamscapes of their debut 2015 LP Realms to the cosmic weight of 2018’s Death Spells, the Phoenix quartet has achieved an exquisite balance of euphoric melody, elegant ambiance and overwhelming crescendos. Granted, black metal rasps over glacial chords and washy cymbals are hardly novel, but Holy Fawn sets themselves apart with harmonious singing, electro-acoustic ornamentations and, most importantly, memorable motifs. These secret weapons translate victoriously on Dimensional Bleed, further anointing Holy Fawn to push metalgaze deeper into the 2020s.

Dimensional Bleed‘s sound bath quickly fills to capacity during “Hexsewn.” Holy Fawn crystallizes a kinship with Sigur Rós’ Valtari, as spectral singing commingles with glistening drones and reverberant rhythms. The waters only get deeper when “Death Is A Relief” leaves the dock with a melody on par with Ulver’s ambient classic “Not Saved.” This foundation of austere beauty makes the song’s explosive dynamics that much more enormous, augmented by drummer Austin Reinholz’s tactful combination of real drums to well-chosen samples. Likewise, guitarists Ryan Osterman and Evan Phelps blur the lines between synth patches and affected guitar strains, as Osterman’s ghostly singing and screaming follows a narrative of grief and mortality: “Wish I had more to give/ If I could find myself… I could hold you like you needed me to.”

Grappling with death and loss makes up a large chunk of Holy Fawn’s lyrical themes, which gives cuts like “Empty Vials” and “Void of Light” emotional weight to match their sonics. Indeed, the former’s sluggish four-on-the-floor pulse reveals a desire for reconciliation between passing on from the world and one’s ongoing desire to help those left behind. Where this song’s lulling modulations embody the feeling of wavering between planes of existence, the latter’s urgent crescendo embodies a constant movement toward inevitable demise. Osterman appraises the grim reaper with wraith-like rasps amid syncopated drumming and glistening spires of reverb-soaked tremolo guitars: “I felt you though/ Void of light/ Gripping rope/ Crow and scythe/ Take us all.”

Even with harsh vocals and cataclysmic arrival points, Holy Fawn makes music to soak in. But songs like “Lift Your Head” don’t appeal simply as transient mood music. The amount of layers added to the proceedings provides numerous vocal, or instrumental refrains to enjoy — often multiple at once! This allows a song like “Sightless” to earn its gradual buildup. The ethereal beginning carries ideas just as memorable as when Alexander Rieth’s growling bass feels the empty space.

In fact, both of these track’s display Holy Fawn’s ability to maintain transportive immersion during dynamic shifts. Whether with synthetic samples or real drums, tectonic chords or drizzling pianos, this album accomplishes atmosphere to a point where its every aspect sounds like a glimpse into an alternate reality.

Like the album’s name suggests, Holy Fawn fashions heavy shoe-gaze into a dimensional portal. Sure, “Amaranthine” could stand on its slow-core and shoe-gaze quotients, but the song’s arresting beauty stems from an attention to minutiae. Every drone, chime or falsetto croon breathes like a living organism, imparting warmth and vitality to support the arrangement’s central rhythm and melodic structures. Even the foreboding piano thuds, proggy drums and more blackened screams of the title track seem to emit from this enveloping monolith. Holy Fawn uses their most intense elements to add passion to an already massive impact, rather than to break the suspension of disbelief Dimensional Bleed provides.

“True Loss” encapsulates how tastefully Holy Fawn can use harsher sounds to give an arrangement an extra push into true catharsis. As its immaculate vocal harmonies and protracted drum groove guide the drifting arpeggios and soaring swells, the screams are barely audible amid the mounting distortion—performed more for support than changing the song’s trajectory. Similarly, the rasps that layer on the clean singing of the closing track “Blood Memory” allow its final sentiment to cut through the music’s tumultuous epiphany. As the multi-faceted soundscape reaches its climax, Osterman’s words offer peace after a harrowing lyrical journey: “There is only time/ A circular pattern/ A hex I abide/ I’ll find you again/ In some other life.”

These last words hang in the air, like the extended outro of plucking, echoing piano. When silence finally comes, the significance of Dimensional Bleed becomes all too clear. Holy Fawn have brought their stylistic amalgamation to lofty heights in pursuit of solace from existential dread. Dimensional Bleed is not only a great addition to the metal-gaze pantheon, but a mind-altering voyage through the dichotomy between life and death.

Holy Fawn’s Dimensional Bleed comes out September 9th via Wax Bodega. Listen to the singles “Void of Light” and “Death is a Relief” below and preorder the album here.