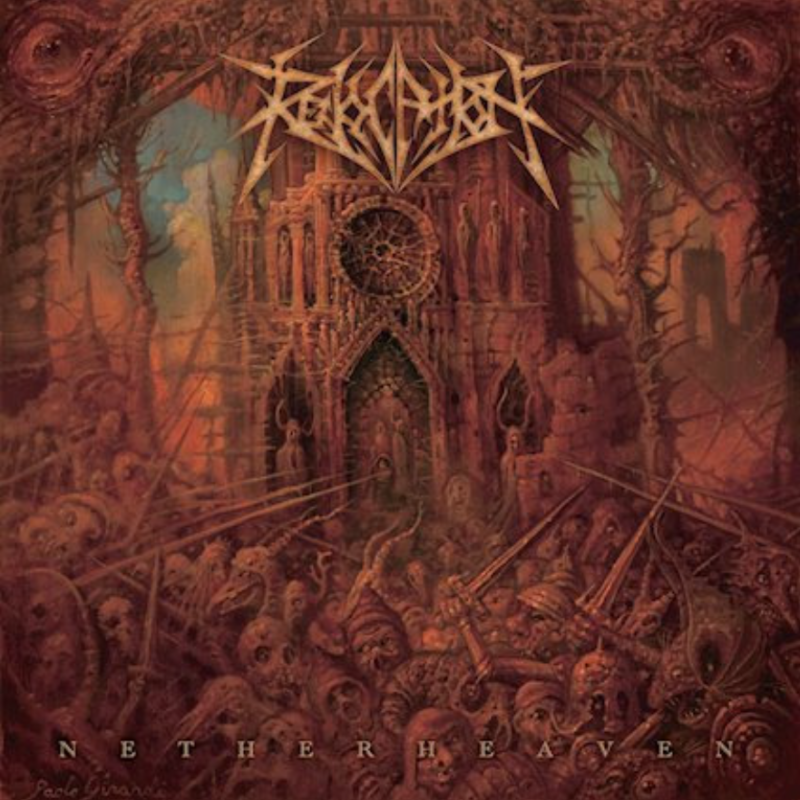 Review: Revocation’s Netherheaven Pulls No Punches as One of 2022’s Best

When it comes to new music, I’ve held the mindset that 2022 has been a somewhat lackluster year. Yet, after spending some time with Revocation‘s eighth studio album Netherheaven, I can gladly say that it’s the kind of album that hits with the potency of a magic eight-ball to the face — and it may just be one of the most exciting releases of the year.

Billed as Revocation’s triumphant followup to their 2018 release The Outer Ones, Netherheaven is the Boston-based progressive death metal trio’s darkest and most sinister album yet. This thrilling effort pulls no punches and has no weak spots. As such, we thank Beelzebub that Revocation never got it into their heads to try to inspire us with uplifting messages in their songs like so many other modern death metal bands.

Inspired by the likes of Dante’s Inferno and Robert W. Chambers’ The King in Yellow — which is a completely haunting American must-read, by the way — this nine-track record takes you on a journey through the nine circles of Hell. The album’s Bosch-like cover perfectly summarizes the band’s aspirations.

Netherhaven is dedicated to the late Trevor Strnad of The Black Dahlia Murder. And what a wicked tribute it is. The final track, “Re-Crucified,” actually features both Trevor and everyone’s favorite claw-machine hero, George “Corpsegrinder” Fisher of Cannibal Corpse.

The tone on Netherheaven is authoritative throughout. Give it up for David Davidson on guitar and vocals, Ash Pearson on drums, and Brett Bamberger on bass for creating such an exceptional cauldron of sonic adrenaline. Davidson’s energetic, raw vocals will make you feel as though the two of you are locked in a small space and he’s stomping on your chest. Their in-your-face display of skilled musicianship is arresting.

Yet, Netherheaven isn’t just straight-up, it also wreaks of the “Strange and Eternal,” with enough musical variety to keep you hooked from start to finish. Revocation knows just when to throw in a flashy guitar solo or other captivating surprise to change things up. Expect some thrash and melodic influences as well.

This is the type of commanding work that could only have been born of veterans. The opening track, “Diabolical Majesty,” grabs you by the collar right away and lets you know that you’re in for a ride. Meanwhile, “Nihilistic Violence” lurches its way in like a thunderous military assault that serves to castigate the individuals that let cynicism and chaos reign during the January 6 insurrection.

“Galleries of Morbid Artistry” will pull you down into “narcotic dungeons” like the ones found in the Sedlec Ossuary. “The 9th Chasm” is a sublime instrumental track that truly lives up to its name until you’re forced to stomp along to the following track, “Godforsaken,” in which Davidson sings of God deciding to plunge “all of humanity into lakes of boiling blood.” The penultimate song, “The Intervening Abyss of Untold Aeons,” is an especially brutal delight.

Every bit of this album works. If this album can satisfy an elitist snob like me, you’re going to love it too!

Revocation’s Netherheaven comes out on September 9th via Metal Blade Records. Check out the singles “Diabolical Majesty” and “Re-Crucified” below and pre-order the album here.

Sponsored Links from Across the Internet
Show Comments
Related Articles
New Stuff 0
Revocation Have Us Seeing Red with “Nihilistic Violence”
September 11th, 2022 at 9:00am Mandy Scythe

Metal Sucks Greatest Hits
0 -
Verax’s Terrible “Time Wasters” is a Great Waste of Time
3680 -
Korn III: Remember Who You Are Listening Party Report
9630 -
Fred Durst: Still a Moron
0 -
Missed Connections: You Puked at the Ulcerate Show (M4M – Brooklyn, NY)
0 -
A Sh*tstain on the Ass of the Universe, #28: Lie or Liar
0 -
Unearth are the Slayer of Metalcore