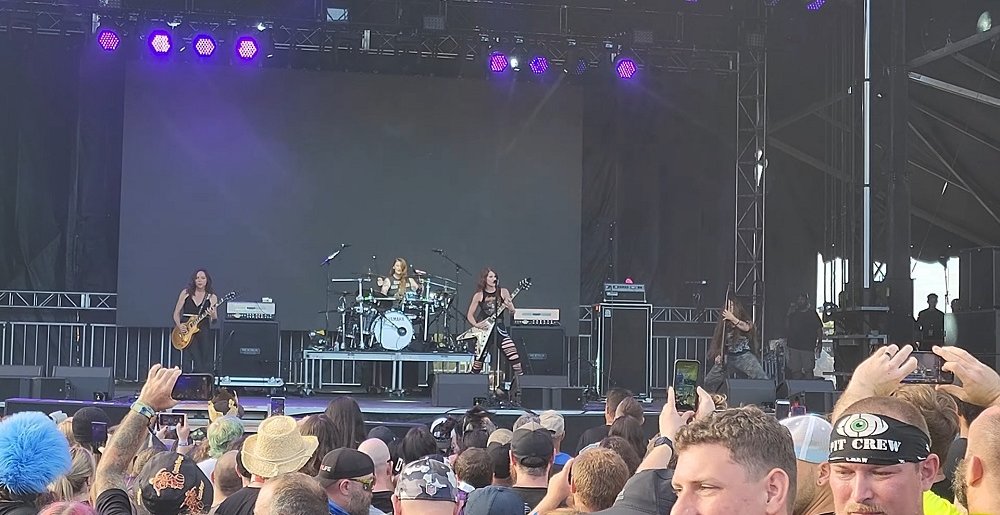 Kittie Took the Stage for the First Time in Five Years, Peep the Fan Footage

At the Blue Ridge Rock Festival yesterday, attendees got a special treat as Kittie took the stage to perform together for the first time in five years.

Morgan Lander (a recent The MetalSucks Podcast guest), her sister Mercedes Lander, Tara McLeod, and Ivana “Ivy” Vujlc hadn’t shared a stage since their reunion show back in 2017 in London, Ontario. That performance was to fete the documentary Kittie: Origins/Evolutions.

Though she told Anne Erickson of Audio Ink Radio that this show and an upcoming one at the When We Were Young festival this October were the only ones in 2022 the band had planned. But that didn’t mean the band was going on another hiatus.

“That’s it for this year. But next year, we definitely will. But I think those opportunities will come later on.

“We don’t have anything set in stone, but I think it’s something that, like I said before, once these doors are open, I think we can expect to feel comfortable doing a few more little things here and there and hopefully we’ll be able to do some more one-offs in the States and Europe and that type of thing,” she explained. “So the possibilities are endless.”

As you can see in the video below, the band sounded pretty tight. Sure, they get lumped into the nu-metal scene and deserve that distinction for a good part of their career. But they’ve put out some pretty heavy music in the latter parts of their discography and at least deserve some conversation as to whether they should be saddled with further consternation from the old guard, stodgy, gatekeepers of our community. I say no, but I also say fuck those guys anyways.

Sponsored Links from Across the Internet
Show Comments
Related Articles
Podcast 0
Kittie’s Morgan Lander on The MetalSucks Podcast #452
August 22nd, 2022 at 8:00am MetalSucks

Metal Legacies 0
To The Little Brothers and Sisters of Rock and Metal: We Salute You!
April 14th, 2022 at 12:35pm Emperor Rhombus

Reunion Mania 0
Watch: Kittie Rehearse as a Band for the First Time in Five Years
April 11th, 2022 at 10:16am Emperor Rhombus

“The feeling is unbelievable!”

Metal Sucks Greatest Hits
0 -
Viral Drummer Nandi Bushell Pays Tribute to Taylor Hawkins: “Thank You for Looking After Me”
0 -
Editorial: Your Dead Metal Heroes Were No Angels
0 -
Former Attack Attack! Bassist John Holgado is the Stupidest Human Being Ever
0 -
‘Til Death Do Us Part: Metal + Hard Rock Musicians’ Wedding Portraits
0 -
11 Bands You’d Get Made Fun Of for Liking Back In The Day
0 -
I Watched Rock of Ages so You Don’t Have To