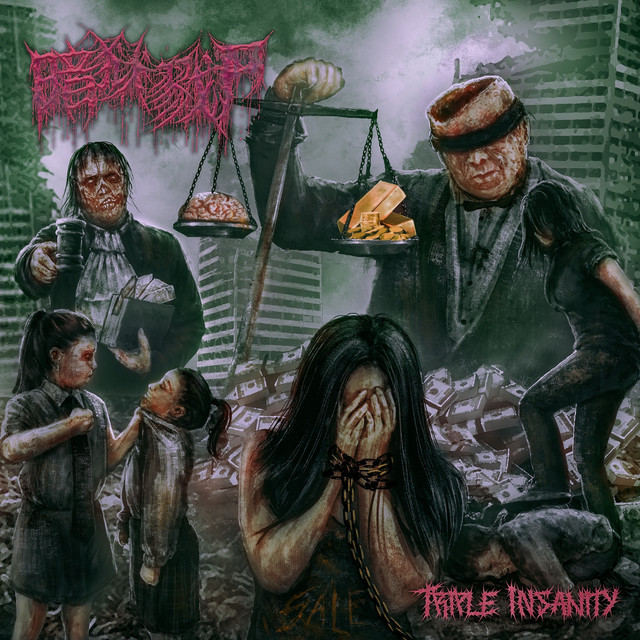 China’s favorite sons of slam, The Dark Prison Massacre are back Triple Insanity, their third studio album and the first since 2017’s Deformity of Human Consciousness. The band gave the world a teaser of what to expect last year with their video release of “No School Violence,” a socially conscious track about the ongoing issue of bullying within Chinese schools, often leading to violence or suicides.

The track’s theme may have seemed more mature and progressive, though the band has always had their eye on social issues (the band name referencing the prison system within China). Their sound, however, has been on a progressive spin since the 2020 single Conviction, which introduced Egyptian elements to their normally ultra-aggressive groove/slam sound.

Triple Insanity further alters their sound, as they mess around with a funky, nu metal-esque break in “Dead Hand System” one minute and then jump into the band’s finely tuned chunky slam assault. “Ghost Island Dalits (Sihan version)” showcases some more exotic backing instrumentation, giving the song a far-east (or west, if we are in China) flavor.

The new elements are evenly balanced throughout the album’s 34-minute run time. Within that short time frame, the musical progression displayed throughout the album doesn’t stray too far from the band’s winning formula that’s proved successful since their inception. Songs like “Scam Pioneer” and “Cerebral Failure Projection” offer the familiar animalistic gurgling and grunts accompanied by the groovy riffs of guitarist Heji (何稷).

While they’re a slamming, brutal, death metal band at their core, The Dark Prison Massacre aren’t above wearing their influences on their sleeve, including bands like Korn and Pantera. Like Korn, the band has mastered the art of building dynamics within their tracks, which pay off live in a big way (they’ve also covered “Faget” prior).

The album’s topics are displayed on the grindcore-esque album cover: bastard judges, justice being measured by the amount of dollars spent, and the aforementioned school violence. As the band has matured throughout the years, having kids of their own, they have felt a responsibility to be more of a positive influence on the hordes of younger listeners that attend their shows around China, and this album is a testament to the fact that just because your sound is as niu bi as possible, doesn’t mean that sound can’t also be a vessel for positivity.

The Dark Prison Massacre’s Triple Insanity is out now via Amputated Vein Records. Listen to the album now on Spotify.