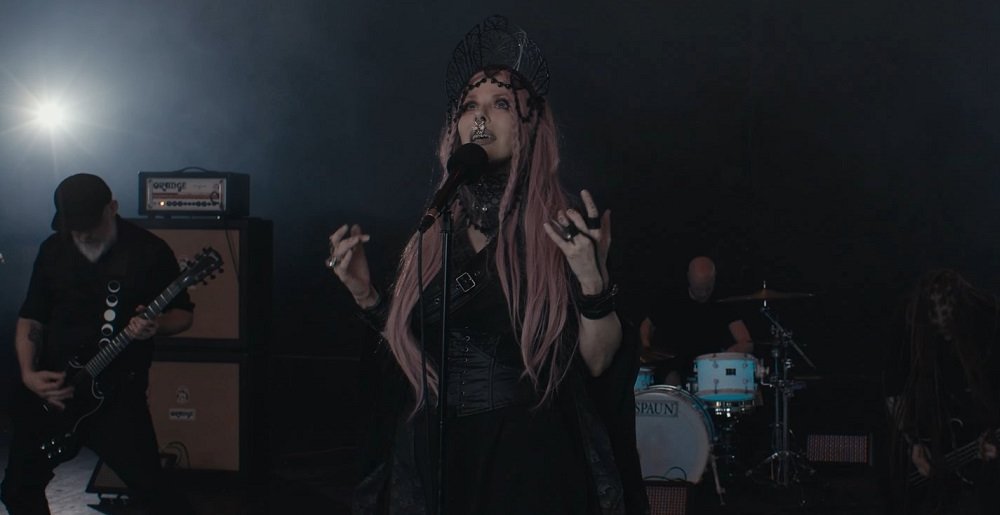 Exclusive: Gwyn Strang and Sean Bilovecky of Frayle Break Down Each Track on Skin & Sorrow

The days are getting shorter, a chill is slowly growing in the air, and today’s the day Frayle’s sophomore studio album Skin & Sorrow makes its way to the masses.

The Cleveland-based duo of Gwyn Strang and Sean Bilovecky (ex-Disengage) have created a ritual metal album that’s sure to burrow its way into your emotions, mixing heavy music and ethereal vocals that evoke the heartbreak and pain that we all feel at some point in our lives.

With such an evocative album now out in everyone’s hands today, we were lucky enough to get Gwyn and Sean to sit down and explain the meanings, emotions, and thoughts that went into each track on the album.

So enough preamble from us at MetalSucks. Enjoy your trip into the dark with Frayle’s Gwyn and Sean.

Gwyn: To me, the riff in this song is the main focal point. It’s very heavy and quintessentially Frayle since it’s more about dissonance and rhythm.

I wanted to give it lots of space so that you hear everything. The vocals are spare, and the lyrics are not flowery or prose-ish, just very straight forward and simple.

The song is about my distaste for liars, and people who promise you the moon and stars, only to deliver nothing. Treacle is a cloying sentimentality, and one of my least favorite traits.

Sean: “Bright Eyes” is a collaboration with King Midnight and brings a new take on doom and sludge.

Gwyn: “Bright Eyes” is about putting on a happy face when your world is crumbling. Sometimes we do this because we don’t want to have to explain what is going on in our lives, and sometimes it’s so that people around us don’t feel uncomfortable.

Sean: “Skin & Sorrow” is the first time that we used smaller amps to create more of a “song writer” vibe. We used these amps to scale back, especially in the verses to let Gwyn’s lyrics and melody be the focus. This continues into the chorus where we intentionally maintain the same notes.

Gwyn: “Skin & Sorrow” is a heart breaker for me. It was written the night of/the day after someone close to me died. The lyrics were very stream of consciousness. I really wanted the melody to mirror the depressive nature of the lyrics, and add a harmony to the chorus so that I could further convey the heartbreak that I was feeling.

Gwyn: This is an angry song about giving someone a chance to prove that they are worth your time after them disappointing you time and time again.

Sean: To me this song has a late 90’s vibe to the verse that I really like. There’s something inherently soothing in the way that Gwyn’s melody bounces over the guitars.

Gwyn: This is another song of mourning. The enormity of sadness that I felt was overwhelming, and I thought that “even the stars weep at their loss” explained how I was feeling.

Sean: We approached this song with the intention of having many of it’s parts sound like loops even though they’re played live.

Sean: This song is kind of our take on a Black Sabbath vibe.

Gwyn: “Roses” is my stalker song. It’s about making someone love you, and not taking no for an answer.

It also is a nod to people who don’t enjoy a simple relationship.

Sean: I actually wrote this riff years ago when first getting back into music after a long hiatus. It’s a throwback to my musical roots to when I was in my old band, Disengage.

Gwyn: “Sacrifant” is another angry song, and talks about things I would like to do to people who hurt others.

All the Things I Was

Gwyn: This is song about mistakes I made in my past and what I did to correct them going forward.

Song For The Dead

Gwyn: This song was written for a friend who passed. It’s an homage to the wonderful person she was.

Sean: I absolutely love the break down in the bridge. To me, it’s probably the most beautiful section of music that we’ve written.

Gwyn: This is another song that I wrote the night of or the day after someone close to me passed. It breaks my heart to listen to it because I can hear the pain in my voice. When I talk about tending the angst I keep, and waiting among profound thorns, it brings all the emotions back and makes me wade in melancholy all over again.

We put everything we had into making this record and hope that you enjoy it!