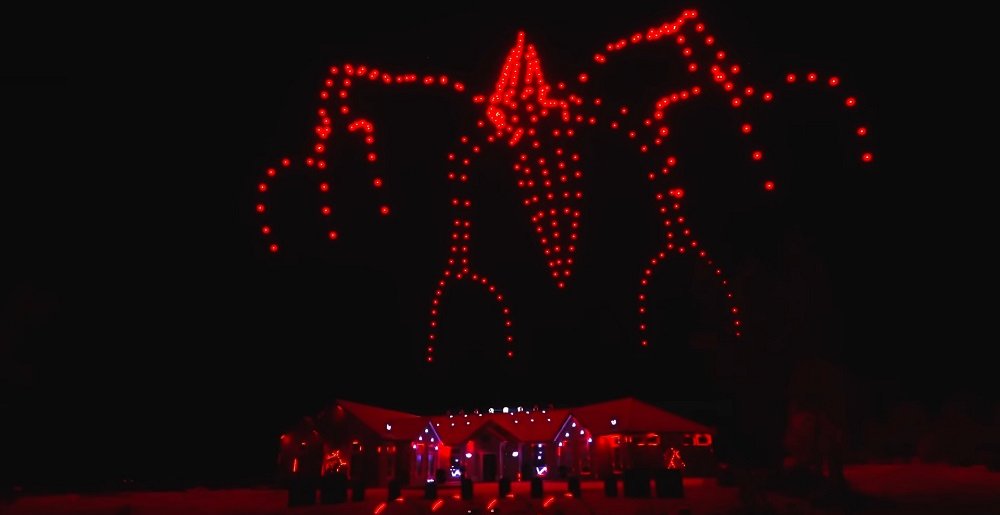 Some people just have too much time, energy, money, or a combination of all three. While those things can often manifest into some unhealthy extremes, like adherence to Q-Anon or getting unhealthily obsessed with collectible tchotchkes, it sometimes results in an insanely impressive display of drones, lights, and Metallica‘s iconic song off the Stranger Things soundtrack, “Master of Puppets.”

Late last week, YouTuber Tom BetGeorge posted a video showing his latest holiday display, which utilized spotlights, multi-colored LED string lights, and DOZENS OF FUCKING DRONES. Everything is set to move around and light up in time with the music, which just happened to be “Master of Puppets” for a majority of the time.

As you’ll see in the video below, light up pumpkins take the place of James Hetfield on vocals while the scores of drones dance around in the sky, first showing the band’s iconic logo before turning into various 400 foot tall recreations of some of the big bads in Stranger Things. It’s super impressive and had to have taken a ton of time to get set up. The display even got the attention of Metallica themselves.

The second portion of the video switches to a Ghostbusters theme, complete with the Stay Puft Marshmallow Man. It’s really worth watching the entire nearly nine minute long video.

This isn’t the first time Tom BetGeorge has put on some sick displays set to some loud music: he’s also done displays set to System of a Down, Nirvana, and that other popular Metallica song. But all you need to do right now is check out his latest creation below.

Metal Sucks Greatest Hits
0 -
Video Footage of Emmure’s Frankie Palmeri Getting Electrocuted On Stage in Russia
0 -
Will People Please Shut Up About the “Fake Amps on Stage” Debate?
0 -
What if Black and Death Metal Albums Were Children’s Books?
0 -
Eleven Useful Tips for Local/Unsigned Bands
0 -
Avril Lavigne Must Be Stopped
1230 -
Loutallica’s LuLu: The MetalSucks Reviews