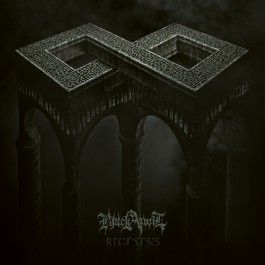 Review: Black Anvil’s Regenesis is the Sound of the Streets Stripped Down and Gussied Up

On the surface, Black Anvil appear to be a manifestation of their New York City home. Ink covered flesh, dirt inescapably encrusted under fingernails, hardened eyes staring mile-wide gazes as you’re dared to “put your fucking hands on their fucking truck once more,” the soles of their black combat boots coated in the piss, shit, spit, discarded black bubblegum, kitchen grease and rat droppings of lives lived in the most urban of urban jungles. As such, this steely exterior has been matched by a sonic output bathed in as much clinical brutality as fetid sewer stench.

At the same time, Black Anvil have become known for their deliberate expansion of the oft-narrow tenets of American black metal, especially with previous full-length, 2017’s As Was and the follow-up, 2019’s Miles EP. Both those releases featured the increased use and effective impact of clean vocals to the band’s already strident take on gritty extreme metal. If Imperial Triumphant are the sound of The Big Apple’s avant-garde chaotic variety, then Black Anvil are the sound of the city’s underbelly refusing to go away despite glitz, glamour, safer streets and the Disneyfication of Times Square. It’s the long winded way of saying Black Anvil appear to be a manifestation of their New York City home. Please note that we delineate them as a manifestation, not the manifestation; there’s an important distinction.

After ruffling feathers with As Was (especially the title track and its last two songs) and most of Miles — ‘omigod, there’s singing! The horror!’ — the recently pared down trio have also pared down their sound for their latest and fifth album. Regenesis, as the title implies is…well…a regenesis; a new start, a reimagining, with a little bit of a return where things started sprinkled in there for good measure. In a way, this album takes the listener back to the stripped down, rawer sounds of the band’s early years, before they and everyone else sporting one of those stylized NYBM tattoos figured out how to incorporate their post-punk and goth listening habits into leather cut-black metal. Fortunately, it also doesn’t forget the steps and advances that have been made in the interim.

“In Two” starts the album with riffs basking in valley-wide spaciousness and melodic layers contrasting with a wretched vocal scritch and counterpoint guitars adding to the epic feel. The song’s final third is a marvel of musical DNA splicing as a solo that would make a young Kirk Hammett smile is poured over harmonious black metal like absinthe over sugar as choral vocal moaning that falls somewhere between celibate, wine-making monks and Botch’s “We Are the Romans” to add the sensation that angels are about to start falling around your ears.

“The Bet” may be more conventional rapid-fire, tendinitis-inducing blackened atonality, but it’s the accented bursts of backing vocals with punk rock leanings and Jeremy Sosville’s blues box soloing that add speckles of charm to a series of riffs you’ve probably heard a couple hundred times this week already. Same goes for “29,” a song which adds to the fray with a mining of crusty punk, elevated tempos and alt-metal-friendly ghost note snare shots driving the mid-section. As well, the swell and sway of voices, which upon greater examination appear to be where a more conventional band would have used keyboards, keep the song haunting and immersive.

On the other hand, there’s “8-Bit Terror” where bassist/vocalist Paul Delaney’s vocal phrasing pounces and locks in with the verse and chorus riffs like a fat dude on a PopTart before spirited bouts of mid-paced Hetfield-like, picking hand chug and another top-shelf solo add up to make for a passionate spin on true metal. The ironically titled “Silver Steele” is like Isis meets Type O Negative as it straddles velvety, almost balladic, luxuriousness and some intensely layered doomy post-metal clang with an almost radio-friendly stab that draws influence from mainstream eyeliner abusers like Stabbing Westward and Filter while still keeping an of downcast depression in the mix.

If there’s a downside to Regenesis, it’s that there are issues with homogeneity when it comes to some of the black metal source material and its rawness. In the case of “Castrum Doloris” it’s not until a sample break offers up the song’s light bulb moment and life is breathed in with a sequence that’s all energetic and melodic bluster. But with album that clocks in at a lengthy 50 minutes, any band would have to be superheroes to not have at least one or two downcast moments. The fact that Regenesis’ back-end offerings are all soaked in brawny stability, from the minimalist industrialized goth of “NYC Nightmares” to the blackened hardcore chug (and martial horns!) of “Grant Us His Love,” shines a light on the inherent strength of this record. These are songs that, like the album, explore the raw and spacious tenets of Black Anvil’s sound, but still summon the listener for a deep dive into their uniquely sabulous world.

Black Anvil’s Regenesis comes out on November 4th on Season of Mist Records. Check out the video and single for “8-Bit Terror” below and pre-order here.

Hailing from the blackened streets of Queens, Delaney shares his thoughts on the new Black Anvil effort.

Metal Sucks Greatest Hits
0 -
Will People Please Shut Up About the “Fake Amps on Stage” Debate?
0 -
Watch This Kid Perform Europe’s “The Final Countdown” Entirely with Hand-Farts
0 -
Scientific Proof That Djent is a Genre
0 -
Jack Daniels Releases Single Barrel Whiskey in Honor of Motörhead
0 -
Video: Dudes Rockin’ Out to Van Halen Meet David Lee Roth, Have No Idea Who He Is
0 -
It’s Official: There is Too Much Slayer Merchandise