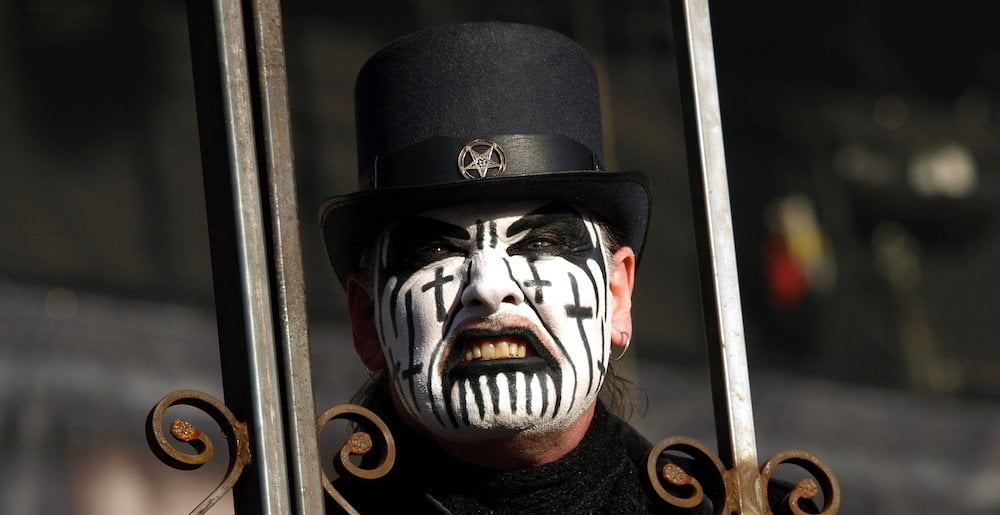 Photo by Cecil via Wikipedia.

There are few voices in metal more iconic than the man himself, Mr. King Diamond. And while his vocal stylings have changed over the years, a medical condition may have had the biggest impact since he was a teen, according to a recent interview over at Metal Injection.

Back in 2011, King Diamond was forced to change his vocal technique before he was supposed to join Metallica on stage for a performance of the band’s Mercyful Fate medley during one of the band’s three 30th anniversary shows. According to the man himself, an incident at a Volbeat show prior to the Metallica gig made him unsure if he was going to be able to perform with James Hetfield and company.

“[At a Volbeat show about five months after the surgery] I had discovered that the metal rods had not completely [fused with my rib cage to hold it together] and it started shaking inside my chest. I thought I was dying. I couldn’t really run at that time, but I got out of there as fast as I could because I thought I was dying. Because of the loud sounds and vibrations, [the sounds] would vibrate this metal rod inside. So I expected something like that would happen while I was in San Francisco [with Metallica]. It was exactly one year after the operation. But it was firm. There was nothing happening. I was like ‘cool, I don’t have to fly home right now.’ Then we tried playing.

“I had to change my technique of singing on the spot because I had a bigger lung capacity than before. I could take really giant breaths. So something changed because of the whole rearranging inside, so that has helped me [along with] stopping cold turkey with smoking cigarettes. My voice came back. It was like, ‘here’s a new one if you want one.’ It feels like it’s better than when I recorded the Abigail and Don’t Break The Oath albums. The way I was singing them back then, I’m singing them stronger than I did back then.”

More recently, King Diamond has been seen on stage performing with Mercyful Fate. With a tour currently underway, King Diamond said that he’s feeling great and ready to take on the world.

“I have so much joy singing a song like that now. It’s very challenging, but it’s so much fun.

“[The old Mercyful Fate material] feel so awesome to sing today. Much better than I’ve ever felt singing them before. It’s much more fun too, and a lot of that fun has to do with that we have an awesome crew. Great sounds, great lights, it looks great – all the players are on top of their stuff.”

King Diamond is currently on tour in the U.S. as he fronts Mercyful Fate. Both Kreator and Midnight are the tour’s supporting acts. You can check out the dates below:

Metal Sucks Greatest Hits
400 -
Danzig is Just Cleaning Up His Motherf*cking Bricks, Bitch
0 -
Debunking the Myth that Guitar Hero Made Dragonforce
0 -
Two Eleven-Year-Olds from Brooklyn Start a Metal Band, Awesomeness Ensues
0 -
Dave Mustaine Mourns the Loss of Twinkies, Endorses Secession
0 -
So As it Turns Out, Banging Your Head a Bunch Can Be Bad for Your Brain
0 -
Footnotes: A Handy Catalog of Every Song from Which Avenged Sevenfold’s Hail to the King “Borrows”