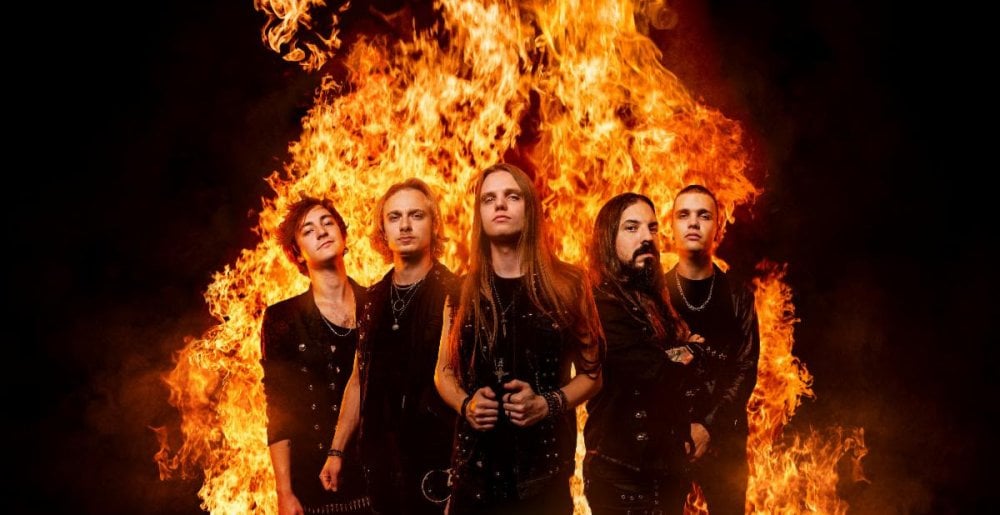 To celebrate the release of Born From Fire, out last Friday via Atomic Fire Records, Induction just dropped their video for “Embers,” a proggy, power metal track dedicated to Children Of Bodom’s late frontman Alexi Laiho.

“‘Embers’ is the reflection of his influence on both my songwriting and guitar playing,” says Induction’s Kanoa Hansen. “This is my way of paying tribute to one of my heroes. ‘Embers’ doesn’t only reflect Alexi’s writing style put into Induction’s context, but also lyrically, it’s about the passing of great people and heroes and letting them live on in our memories. ‘Embers’ is also presented together with a music video which represents the lyrical topic of evanescence and postmortem.”

Born From Fire, was mixed and mastered by Jacob Hansen and is graced by the cover artwork of Peter Sallai (Sabaton, Jinjer, Powerwolf). It’s 12 tracks of pure, symphonic fury.

Describing themselves as “progressive power metal with symphonic influences,” Induction channel bands like Children of Bodom and Dragonforce in their music. This record represents another big milestone in their career.

Tim Kanoa Hansen of the band says about the record:

“Louder, bigger, better, faster, stronger. Let me welcome you to the new album of Induction. Born From Fire is out now and will take you on a journey through its universe. It’s a statement to the power metal scene that it’s time to wake up from the slumber and to get some fresh air. Born From Fire‘s epos will draw you in with heartfelt stories, live, catchy melodies, and mind-bending arrangements. While not being a concept album, we still have a very specific message to convey, which—bluntly put—is: We are back and stronger than ever. Not only Induction, but the world of music, in general, after the pandemic’s fatal reign.”

Induction have been making music since 2014 and dropped their first single, “The Outwitted Consecration,” in 2016. Their first record came out in 2019, launching them more into the public view, ss they made their European tour debut with Armored Dawn from Brazil. That November 2019 tour was one of the first and last big things the band did before the pandemic halted the mobile part of their fledgeling career. They used the downtime to work on their new album.

In support of the release Born From Fire, Induction are currently on a European tour supporting Serious Black. See all confirmed dates below. Keep up the band’s tour dates here.

Metal Sucks Greatest Hits
0 -
Iudicia is Your New Favorite Band
750 -
Anthrax vs. Axl vs. Anso: The Worship Music Double Review
0 -
Joey Jordison Claims He Was Fired from Slipknot Via a Singing Telegram
0 -
I Am The Working Class: The MetalSucks Interview with Fenriz
0 -
Editorial: True Loyalty Means Admitting When Your Favorite Bands Suck
0 -
Phil Anselmo on Hearing the End of Pantera’s “Hollow” for the First Time: “I Was Floored…”