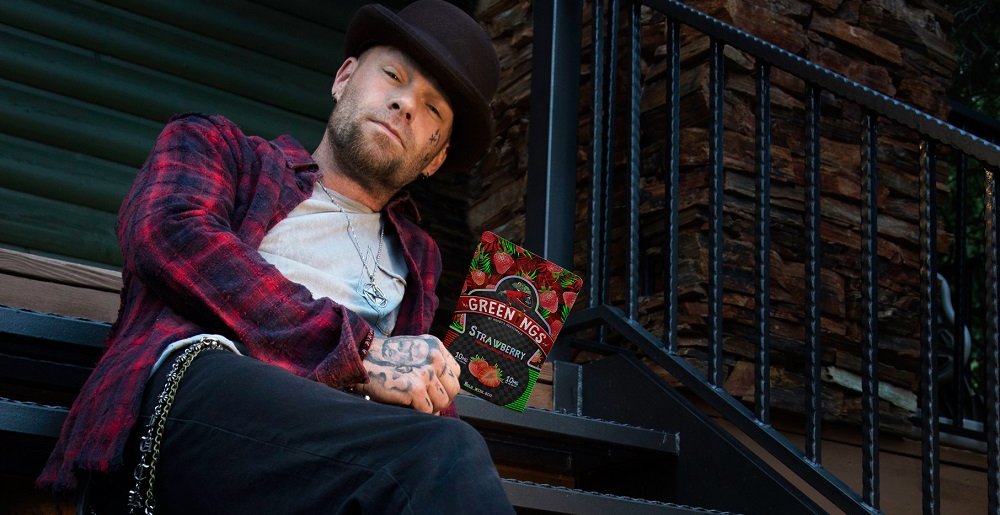 Calm Your Moodys with FFDP Frontman’s Line of Cannabis Products

Weed is pretty damn cool, and thanks to the continued effort around the country to get it legalized in various states, more people are finally able to get their hands on the sticky-icky and not have to worry about getting arrested.

Naturally, this has opened the door for rich people to open cannabis business ventures of their own and damn it, Five Finger Death Punch’s frontman Ivan Moody isn’t going to be left behind.

Earlier today, Moody announced the launch of a new line of cannabis flower and edibles called Greenings. Created in conjunction with Exhale Brands, Greenings is described as a “high-quality, edgy cannabis line, featuring a variety of premium flower, infused pre-rolls, and gummies.”

Not sure what makes cannabis “edgy,” but Moody says the products came about as a result of his continued recovery from alcoholism, explaining that cannabis use helped him get him back on track.

“For years, I’ve had a very public struggle with alcohol addiction, and being prescribed an excessive amount of medication for my imbalances felt overwhelming and completely non-conducive to recovery. I wanted something natural that wouldn’t leave me poisoned with sluggish side effects that countered my life on the road. Greenings was born as a result of the emotional and physical relief I found through cannabis and through my partnership with Exhale Brands, we created a powerful line made with the most high-quality ingredients that’s reflective of my edgy lifestyle.”

Cannabis has long been known to have some beneficial medical purposes, though federal prohibition has restricted just how much research was done on the plant over the years.

Greenings is an extension of Moody’s existing CBD line of products, Moody’s Medicinals. Pete Findley, CEO of Exhale Brands, said the inclusion of actual cannabis products was a natural progression and the partnership between his company and Moody’s made sense.

“We couldn’t be more excited to partner with Ivan Moody on his new cannabis line. Between his global success with Five Finger Death Punch along with his Moody’s Medicinals line of CBD products, Ivan brings a unique passion to everything he touches. His cannabis line brings with it an edge that fans of Ivan and the band can totally relate to.”

Metal Sucks Greatest Hits
0 -
Editorial: The Metal Community Must Stop Letting Phil Anselmo Off the Hook for His Racist Remarks
0 -
Review: Megadeth’s Super Collider is a Super Catastrophe
0 -
I Watched Rock of Ages so You Don’t Have To
0 -
Ten Reasons Why Record Labels Are Still Important
0 -
Nazi Imagery: Why Watain and Marduk Don’t Get a Pass While Slayer and Metallica Do
0 -
Rigged: Luc Lemay of Gorguts