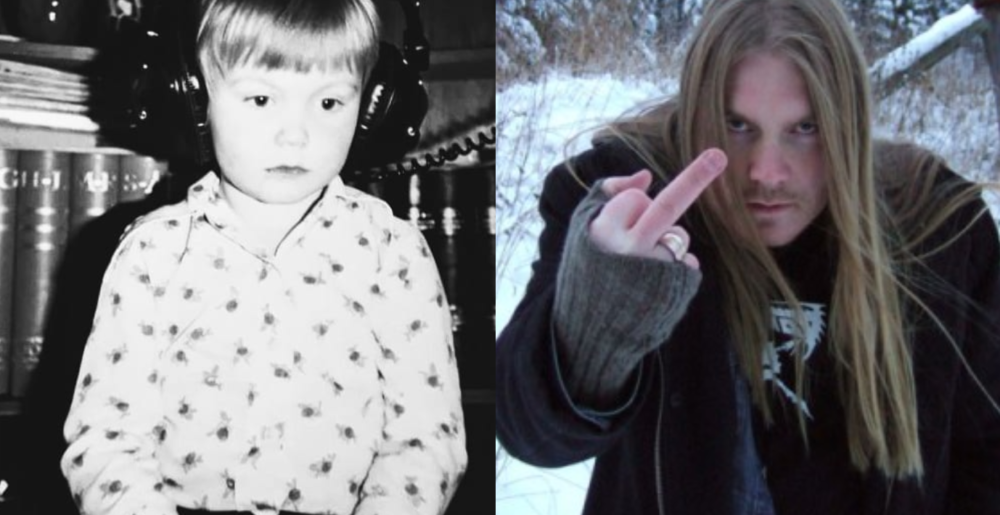 Bringer of Truth: A Brief History of Darkthrone’s Nocturno Culto

It’s probably no exaggeration that “Nocturno Culto,” Ted Skjellum and Darkthrone’s more loquacious half — “Fenriz,” Gylve Fenris Nagell — are The Beatles of True Black Metal. Yet as they’ve aged, they’ve become the greatest defenders of real metal in a more expansive sense. Through his work as a vocalist, multi-instrumentalist, lyricist, and composer, Nocturno has blackened our horizons and destroyed our faith in all but his unique brand of sonic aggression.

Skjellum was born on March 4, 1972, in Romsås, a neighborhood within Oslo. He was first exposed to classical recordings when he was just two years old thanks to his father, who was an avid music lover. Like Fenriz, Nocturno had a “cool” uncle whose vinyl collection with bands like Pink Floyd and Black Sabbath in the mix played a key role in his rock n’ roll education. Nocturno eventually joined group called Credulous on guitar, but he quickly became frustrated due to his bandmates’ lack of ambition.

In May 1988, Nocturno finally became a member of Darkthrone. He first met Fenriz after receiving his number from a friend’s cousin named Kjetil Aarhus, who had briefly been involved with Black Death — the outfit that morphed into Darkthrone. Black Death was actually co-founded during the Christmas break of 1986 by Fenriz and Anders Risberget. Nocturno replaced Anders, whom Fenriz apparently booted in part for liking Five Star’s Luxury of Life (1985).

Darkthrone’s sophomore demo, A New Dimension (1988), was Nocturno’s first recording with Darkthrone. Nocturno and Ivar Enger, who would become known as “Zephyrous,” both played guitar on this offering. The cassette’s 9+-minute track “Snowfall” is still one of Nocturno and Fenriz’s favorites. Peaceville Records soon signed Darkthrone after their live, fourth demo Cromlech (1989), despite an initial rejection letter.

The band’s debut album, Soulside Journey (1991), is remembered as a death metal classic. Nocturno has stated that he created the effort’s vocal sound totally on the spot. Soulside Journey was recorded in Sweden with the help of members of Entombed. Despite, Darkthrone’s success, Nocturno and Zephyrous eventually knocked on Fenriz’s door to suggest switching to black metal. Fortunately, Fenriz had been thinking along similar lines and immediately agreed to put aside work on the DM gem that became Goatlord (1996) — a rehearsal tape completed in 1991 with vocals that were added in 1994.

Thus, Darkthrone started a revolution with their sophomore album, A Blaze in the Northern Sky (1992), which features Nocturno on lead guitar and vocals. A Blaze in the Northern Sky is, of course, known as the very first Norwegian BM album, even though it includes three blackened DM tracks. It also marked the point when Ivar, Ted, and Gylve adopted their famous pseudonyms.

Although Dag Nilsen played bass on A Blaze in the Northern Sky, he and Darkthrone had already decided to part ways. Darkthrone’s next album, Under a Funeral Moon (1993), features Nocturno on the cover. It would be Darkthrone’s last as anything but a two-piece, guest contributions aside. Because Fenriz recorded the music for Transilvanian Hunger (1994) by himself, Zephyrous was unintentionally excluded. He soon quit.

Darkthrone has released a dizzying sum of twenty killer albums to date. They have become known for incorporating elements of various genres: thrash, doom, heavy metal, punk, etc. As time has gone on, the duo has backtracked in terms of digging deep into the past in order to play “more regressive,” caveman music. Nocturno and Fenriz are huge fans of the ’60s, ’70s, and ’80s.

Therefore, it’s no surprise that Nocturno decided to go the route of heavy metal for his excellent EP Receive (2013), which was released under the banner of his solo project, Gift of Gods. Nocturno had some help on this EP from his friends, the Hubred brothers. We recommend the 2016 tribute to Kjell Arne “Hudbreider” by Mork called “Hudbreiderens revir” on which Nocturno sang. Nocturno appeared on vocals with Mork’s mastermind, Thomas Eriksen, yet again on “Svartmalt” in 2021.

Nocturno’s other accomplishments outside Darkthrone are also superb. Back in 2008, the Khold and Tulus genius Thomas “Sarke” Bergli managed to convince Nocturno to be the voice of what he planned as a one-off solo album, Vorunah (2009), after the latter had already declined. The project, which takes Bergli’s pseudonym, ended up becoming a group for the making of their second record. Nocturno has stayed onboard for what has already amounted to seven fantastic albums.

The modern-day hero has contributed guest vocals to Enslaved, the supergroup Scum, Triptykon, Svartahrid, a fantastic project that was called Secht, etc. Nocturno’s collaboration with Taake on the killer opening to the star-studded Noregs vaapen (2011), “Fra Vadested til Vaandesmed,” is definitely one of his best non-Darkthrone songs. The same applies to an alternate version of “Nordbundet” from Taake’s Gravkamre, kroner og troner (2013). This track also features Shining’s Niklas Kvarforth.

Nocturno’s productivity owes to his and Fenriz’s refusal to tour together. This has allowed them to prioritize creating new content while also avoiding situations that might harm their relationship. It was decided after a Finnish mini-tour in 1991 that they no longer wished to play live.

Nevertheless, Darkthrone’s last gig together took place in 1996 at Oslo’s Rockefeller Music Hall, where they shared the stage with Dissection and Satyricon. The latter band actually celebrated their very first show that evening. Satyr played bass with Darkthrone while Nocturno, a.k.a. “Kveldulv,” played guitar with Satyricon. Thus, Nocturno blew his cover as Satyricon’s mysterious new member. You might know that Nocturno was the rhythm guitarist on Satyricon’s third album, Nemesis Divina (1996).

Fortunately, Nocturno still occasionally performs live with Sarke and others. His most famous gig since 1996 was when he stepped out with Satyricon for a special set of Darkthrone songs at Wacken in 2004. He has taken the stage with Satyricon at Rockefeller as well since parting ways with them in the ’90s. Nocturno was one of many musicians, including Frost and Satyr, to participate in a concert that was organized to raise funds for the cancer treatment of Slavia’s late Jonas Raskolnikov Christiansen at the since-shuttered Bergen venue Garage in 2011 — Jonas tragically passed away the day before.

In 2004, Nocturno and Fenriz decided to try their hand at the business side of music and established a now-defunct sub-label dubbed Tyrant Syndicate Productions with the support of their partners at Peaceville Records. Nocturno assumed most of the responsibility for running the operation. The first band he signed was Aura Noir.

Mr. Skjellum is also a major talent behind and in front of the camera. He directed and starred in the documentary The Misanthrope (2007). In 2019, Nocturno revealed on The MetalSucks Podcast that he continues to think about shooting a sequel: “It would be a bit more staged one…” Unfortunately, he doesn’t believe that it will happen in the near future. Nocturno has appeared in other documentaries, such as Blackhearts (2017) and the four-part series Helvete: Historien om norsk svartmetal (2020-2021). You might have also seen him with Sarke in the BM biker zombie movie Saga (2016).

Nocturno told MusicRadar that during the pandemic his “introvert personality flourished.” Yet, in 2020, he broke out of his comfort zone and agreed to represent Darkthrone during a chat with ex-Turbonegro’s Harald Fossberg at the National Library of Norway to celebrate the fact that A Blaze in the Northern Sky has been placed on permanent display there. This year, the album was reissued in honor of its 30th anniversary. In October, Darkthrone amazed us with the stellar Astral Fortress. Whether it’s with Darkthrone, Sarke, or another project, we can’t wait to hear Nocturno’s next masterpiece!

Metal Legacies 0
Darkthrone Would Rather Never Play Live Than Be Rich
November 1st, 2022 at 11:28am Em Shadows

Metal Sucks Greatest Hits
540 -
Glenn Danzig Shops for His Own Kitty Litter
0 -
Rigged: Luke Hoskin of Protest The Hero
0 -
Verax’s Terrible “Time Wasters” is a Great Waste of Time
0 -
What is the best subgenre of metal?? *please read*
0 -
Exclusive Interview: John Baizley of Baroness on the Bus Crash, Recovery and the Future
0 -
What in the Mother of F*CK Did I Just Watch???