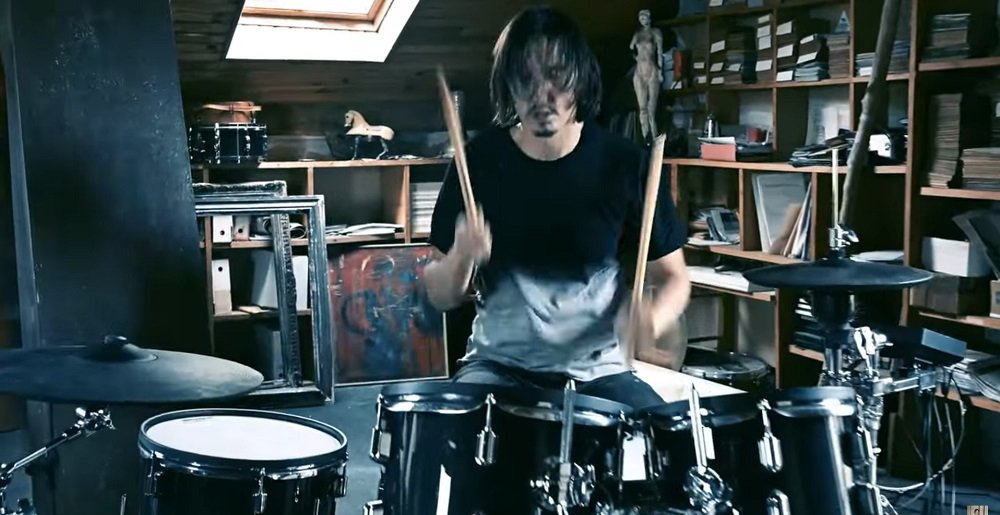 It’s been pretty well known for a while now, but Gojira‘s Mario Duplantier is one of the best (and probably coolest) drummers out there in metal right now. If ancient man were to hear him play, they’d think he was the physical embodiment of their thunder god. Seriously, catch Gojira live and you’ll feel his playing in your chest cavity.

Earlier today, Duplantier uploaded a 54 second clip of him playing a solo drum piece titled “Babar.” According to the drummer, it was named after the huge piece of metal he keeps hitting in the piece, which is a recreation of something he used to use both in recording sessions and in live performances.

“Back in 1996, when my brother and I started Gojira, we were constantly looking for sound experiments,” said Duplantier. “One day we were wandering around in a van looking for objects that could be used as percussion and came across an abandoned area in a village called Labenne. We found a large metal bar on the ground under some rubble. The sound was incredible! We brought it back to the rehearsal room. Very quickly, I integrated it in our songs. For example in unison with few snare hits (Clone-Lizard skin-Deliverance etc …).

“We quickly gave him his name ‘Babar’ like the elephant. Every gig we played we took him with us, and even though Babar took up half the space in our van, we wanted him on stage with us all the time! Babar is among others, present in the intro of ‘The Art of Dying.’

“One day after a concert in France in 2009, Babar was left on a sidewalk during a load out. Babar was lost and had disappeared. In 2011, I met an artist, José Aguirre who was willing to reproduce a new identical percussion. And even if the sound was slightly different, I had the feeling to have found Babar my lost percussion so dear. Since Gojira became international obviously we could not take it to all countries. His size is far too big so Babar is quietly sitting in our French HQ.”

That’s a pretty cute/endearing story for something that helps Gojira make such heavy and destructive music. You can check out the Babar and Mario Duplantier in the clip below, but just don’t get overwhelmed or disappointed that you’re not at his level yet.

Metal musicians are people too.