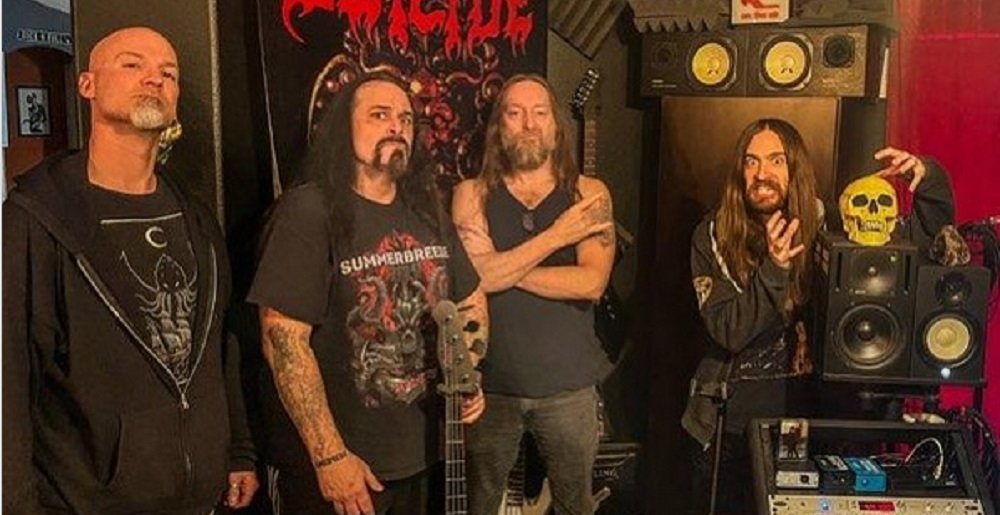 Glen Benton Finished Recording the Bass for Deicide’s Next Album

We’re just a couple measly weeks out from 2023, but we’ve already got a handful of albums we’re chomping at the bit to get our hands on. One of the most anticipated releases of next year, whenever it happens, is Deicide‘s 13th studio effort.

Having been in pre-production since October, the Florida death metal titans have been plugging away at guitarist Taylor Nordberg’s home studio, Smoke and Mirrors Productions in Spring Hill, Florida. Sharing a photo with himself and his bandmates, Nordberg announced through his social media that frontman and bassist Glen Benton had finished his laying down his bass tracks.

“Bass is done! This record is going to flatten everyone into mush. @deicideofficial album #13 #deicide #album13 #smokeandmirrorsproductions”

For as highly sought after as their album is, Deicide has been playing it pretty close to the chest. Earlier this year, Benton went onto The Garza Podcast, where he described the upcoming record as “proggressive” and “really anthem-style,” which sent fans into a tail spin at the time. Of course, Benton was likely joking around when he said those things, so take them with a grain of salt.

Either way, we’re stoked for this one. But in the meantime, you can make sure you also get your hands on some Deicide history thanks to a collaboration we’ve got going with Gimme Metal. Through our store, you can preorder a MetalSucks exclusive cool blue variant of The Roadrunner Years. This nine LP box set features some never before released vinyl pressings, including In Torment In Hell, Insineratehymn, and When Satan Lives.

This obscenely huge special edition box set, pictured below, is available only through our collaboration with Gimme Metal and is limited to just 300 units. This cinder block of aural punishment will release on February 17, 2023 and can be yours for $199.99 at our brand webstore.

Sponsored Links from Across the Internet
Show Comments
Related Articles
Tour de Force 0
Deicide and I Am Morbid to Headline Dortmund Deathfest
October 22nd, 2022 at 11:12am Mandy Scythe