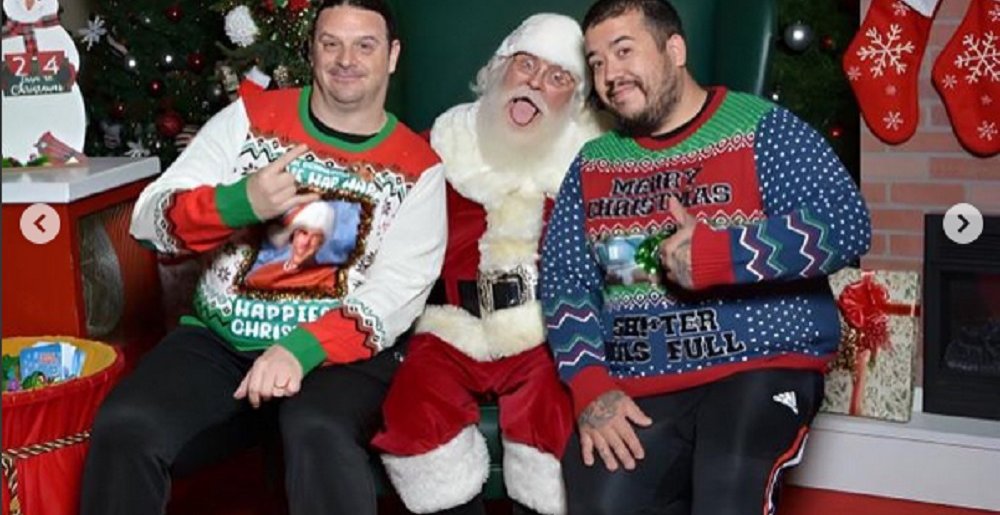 It’s already pretty well known around metal that when it comes to being one of the most brutal frontmen in the game while also being a huge fucking teddy bear, the guy at the top of the list is Cannibal Corpse frontman George “Corpsegrinder” Fisher. From securing deals at Target and crushing it at those claw games, to being a massive gamer with a love of World of Warcraft, he just seems like a super chill, down-to-earth dude that honestly flies in the face a little of the band’s gruesome imagery and lyrical content.

So when news came out recently that he took pictures with a local mall Santa before decimating a local Walmart’s claw machines for charity, all that came to mind was — “yeah, that tracks.”

According to a post on Fisher’s Instagram account, the 52-year-old shared photos of himself yukking it up with Santa, eventually getting even jolly St. Nick to sit on the vocalist’s lap.

A later post showed Fisher with his arms full of stuffed animals and other prizes after ransacking a Walmart’s claw game. While that would be way too much plush for one person to walk away with, Fisher said he was going to donate his winnings to a local charity just before the holidays.

“The last two trips to my local @walmart … have been very productive! More stuffed animals for donations!!! Happy Holidays!!!”

This sort of philanthropy is nothing new for Fisher, who’s said in the past that he saves up his quarters over the course of a year and then goes on a claw game spree, collecting toys to donate.

Metal Sucks Greatest Hits
0 -
Debunking the Myth that Guitar Hero Made Dragonforce
0 -
Dimebag Darrell’s Grave Desecrated and Robbed by Shitty Local Band
1730 -
Leyla Ford’s Eleven Cardinal Rules of Attending a Concert
0 -
Anthrax’s Frank Bello is Really Excited to Be Here, Not at All Concerned About Swallowing Bugs
0 -
Has Moshing Turned Into a Form of Bullying?
1210 -
MetalSucks Exclusive: Behemoth Frontman Nergal’s First Interview Since Being Diagnosed with Leukemia