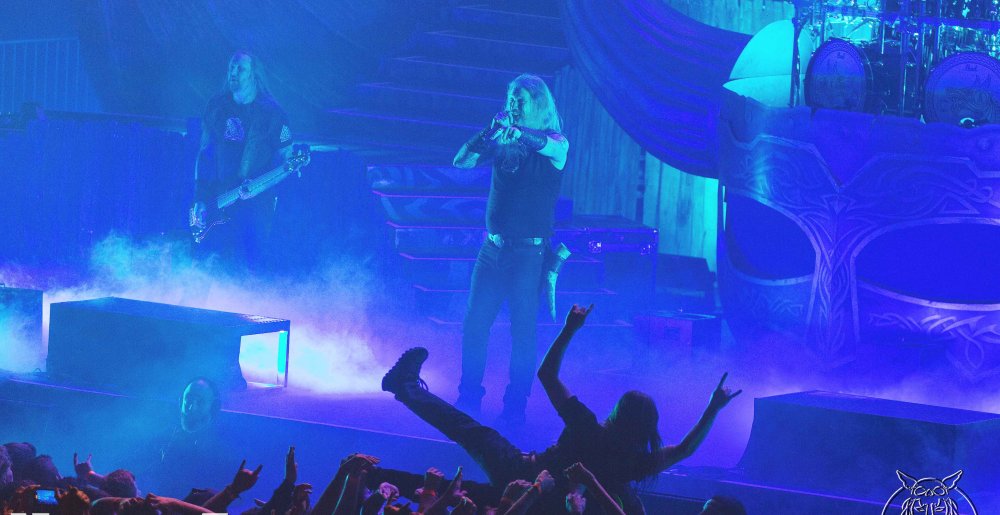 If you were fortunate enough to attend Amon Amarth‘s most recent U.S. tour, or you’ve caught them live in Europe, you know just how massive their show can be. From huge viking ships on stage to battle reenactments to getting the entire crowd to row in time to the song, an Amon Amarth concert is always a worthwhile spectacle to attend.

While speaking with Pollstar, Amon Amarth frontman Johan Hegg spoke about the visual aspect of the band’s live shows and the importance of getting fan interaction going from the start.

“Something we’ve done well is to invite the audience to create the show together. We might be the people on stage, but the interaction is really important. And if the audience interacts with us and we interact with them, the energy becomes so different in the room rather than if you don’t have that connection. You can tell immediately. It’s something we work on really consciously, to create that connection.”

While a lot of that fan interaction is the result of an already excited and rabid fan base that’s willing to buy into the spectacle, Hegg said a lot of it boils down to the amount of effort the band puts into their shows. To that end, he pointed to other bands with spectacular live shows, though one band stands above the rest for him: Iron Maiden.

“For me, they’re one of the biggest, best live acts of all time. But there are several others. I remember seeing AC/DC in Sweden in ’91 on the ‘Thunderstruck’ tour, which was amazing. But if you look at bands doing some cool stuff now, I mean, obviously you have also classic bands like Mercyful Fate and King Diamond. The production that they put into their shows is insanely cool. Modern bands today, I think they draw more to LED screens for production value, and it’s not really our thing. I think it’s cool if you do it the right way.”

We were fortunate enough last year to send photographer Mihaela Petrescu to the band’s December 3 show in Quebec and she came back with some killer photos. You can check out her entire gallery to get an idea of just how striking an Amon Amarth show can be.

News 0
This is the Metallica Song Amon Amarth Would Like to Cover
December 13th, 2022 at 10:18am Em Shadows

News 0
Amon Amarth Unveil Their Latest Cinematic Video for “Oden Owns You All”
December 9th, 2022 at 11:29am Hesher Keenan