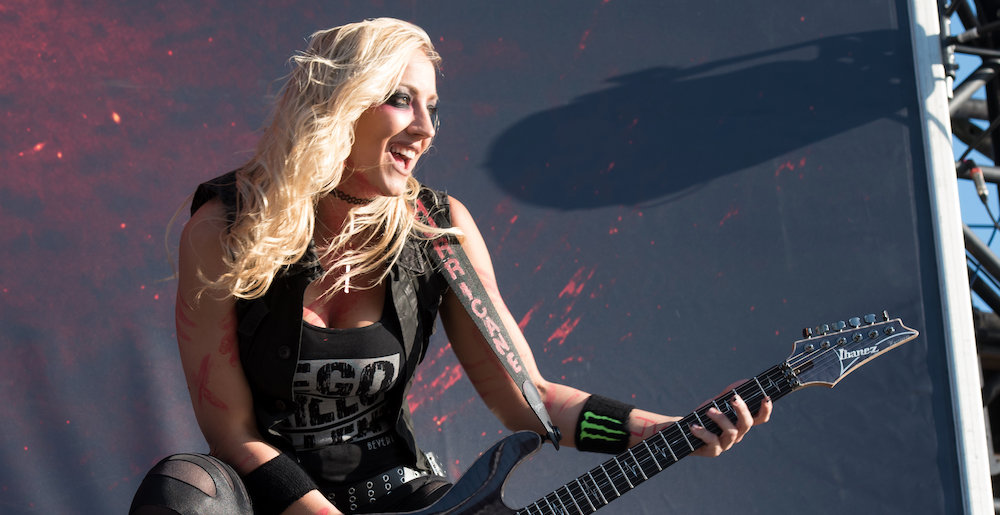 Photo by Frank Schwichtenberg, via Wikipedia.

Nita Strauss Offers One Piece of Advice to Her Younger Self: “Just Be Who You Are”

There’s a ton of pressure to succeed in the music industry, especially as a young woman, which Nita Strauss knows as well as anyone. The former Alice Cooper and current Demi Lovato guitarist started touring as a teenager and began to pursue music full-time before she turned 18, but the advice she was given wasn’t always in good faith, as she discussed on Knotfest’s “She’s With the Band” podcast (transcription via Blabbermouth).

“Early in my career, I got a lot of really bad advice. I was a young guitar player. I started this career really, really young. I did my first national tour at 15 and dropped out of high school at 17 to try to do this full-time. And at the time, I had so many people telling me what I needed to do in order to be successful in this industry — people saying, ‘You need to show more skin’; ‘If you have a boyfriend, you can’t say that you’re dating anybody because you need to appear available’; all this kind of stuff. And looking back, obviously, that’s not the kind of attention that I wanted to get; I wanted to be known as a guitar player, and that was it.

“So once I realized that, I went the complete opposite way and I started really dressing down. I dyed my hair darker — not ‘brown brown’ but darker, darker blond — to stand out less. And I’d wear a men’s large t-shirt onstage and baggy cargo shorts and started touring with heavier bands. And I was, like, ‘I don’t wanna be a hot chick. I just wanna be a guitar player.’ And that’s not who I am either. And I kept getting pulled back and forth through this dichotomy of, like, ‘No, you have to be the sex symbol,’ and, ‘No. You don’t wanna be known for that. You have to just be a serious musician.’ And the reality is where I am doesn’t fit into either of those molds. And it wasn’t until I started just dressing how I wanna dress and acting how I wanna act… And, yeah, if I have a boyfriend, I’m gonna tell the world about it because I love him. And I don’t need to appear single and I don’t need to have fans think they have a chance with me in order to be respected and have people coming to my shows.

“And once I just started embracing who I actually am as a person, that’s when great opportunities and great successes started coming to me. And when I was trying to just fit into some mold or another mold, I was just chasing something that wasn’t authentic; it wasn’t really who I am. So I just wish that I could go back and tell my younger self, ‘Stop trying to fit into what other people tell you you should be, and just be who you are.’”

Strauss dropped three singles last year, two featuring David Draiman and Alisa White-Gluz and one being instrumental. She debuted with Lovato in July 2022.