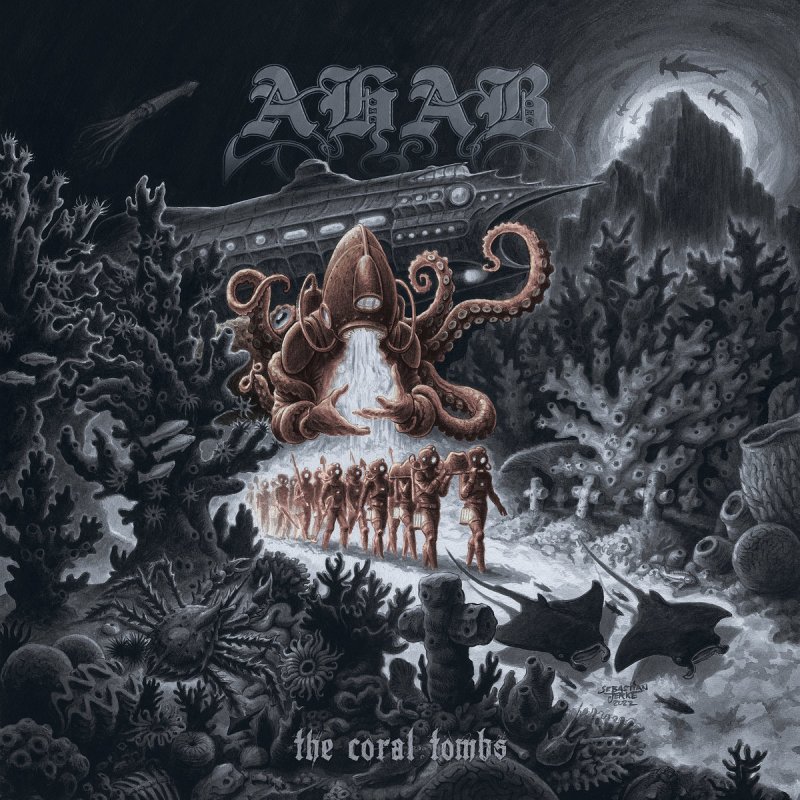 Review: Ahab scours the depths of the wretched sea with The Coral Tombs

After eight years of relative silence, German doom undertakers Ahab return in the only way fans should expect: another concept album about ocean-themed literature. Having firmly established their nautical take on funeral doom metal in the annals of extreme music, the book Twenty Thousand Leagues Under the Seas offers more than a compelling inspiration for their new album. After 19 years of illustrating the expansive wonder and real dangers of an environment still less observed by humankind than outer space, The Coral Tombs proves that the call of the wretched sea has yet to steer Ahab wrong.

The first seconds of opener “Prof. Arronax’ Descent Into The Vast Oceans” comes off pretty anti-funeral doom with its wall of blast beats, chaotic screams and tremolo picked-guitars, but it doesn’t take long for Ahab to reintroduce methodical foreboding. After a tumultuous descent, Daniel Droste’s theatrical singing and echoing guitars lock in with Cornelius Althammer’s spacious groove to evoke the feeling of a submarine drifting through the deep. The sense of melody remains key, as Christian Hector (guitar) and Stephan Wandernoth (bass) respectively bulk up the harmonies. A lofty guitar solo lays the track to rest, but what’s more impressive is how tightly woven Ahab’s atmosphere remains. No one conjures the dread majesty of underwater labyrinths like these guys.

On that note, “Colossus Of The Liquid Graves” aptly illustrates a titan of the deep making mincemeat of hapless explorers. The plodding rhythms, monstrous growls and beefy guitar strains do reflect the vibe of a colossal squid—simultaneously monolithic, yet inescapably ferocious. In a similar way, the chiming glockenspiel, bubbling field recordings, and protracted guitar harmonies that start “Mobilis in Mobili” embody that uncanny sense of silence experienced while submerged. By contrast, the track’s standout descending riff represents the other side of the coin: terrifying power. Directly contrasting those two dynamic extremes makes for some cathartic transitions, topped off by forlorn coral singing and cavernous growls.

Ahab is more than capable of giving songs like “The Sea As A Desert” a post-rock-ish treatment. The meandering groove and hazey riffs almost come off psychedelic, but Ahab proves they can stretch themselves beyond funeral doom convention without forsaking their vibe. It certainly plays well with the melodic singing, and prevents the more straightforward funeral doom ending from blending in. The same could be said about the jazzy brush-on-snare drumming at the start of “A Coral Tomb.” The hushed modulations and whispered growls zero in on a particularly emotional passage of Twenty Thousand Leagues, where undersea adventurers bury their dead in a kingdom of coral.

Ahab embraces dead air, letting each note fully sink in—whether that’s a clean guitar serenade or a morose vocal feature. But equally important are the actual riffs, which the 12-minute journey “Ægri Somnia” brings in the form of catchiness and weight. It’s a good payoff after elongated down sections, and also gives Droste room to push the limits of his vocal performances. He actually saves his most fervent singing for the closing cut “The Mælstrom,” as Ahab shows why their sound is more than an aesthetic gimmick. The song’s emotional heft emanates from every aspect: from its explosive percussion and evolving riff changes, to the fact those distraught higher-pitched screams from the first track come back to make the droning outro that much more haunting.

As the layered vocals blend into a decelerating riff, Ahab’s captures the feeling of being lost at the bottom of the ocean. And yet, that’s not necessarily the band’s only accomplishment here. It’s not just about writing doom about classic books about how scary the ocean is… it’s about making sure the songs actually work. Unique subject matter notwithstanding, The Coral Tombs works because Ahab writes good funeral doom.

Ahab’s The Coral Tombs comes out on January 13 and is currently available for preorder via Napalm Records.

Sponsored Links from Across the Internet
Show Comments
Related Articles
New Stuff 0
Drown Under the Abyssal Weight of AHAB’s Latest Single, “Mobilis In Mobili”
January 13th, 2023 at 10:05am Hesher Keenan

Be careful not to get the bends…

Get your water wings on, shit’s about to get deep.