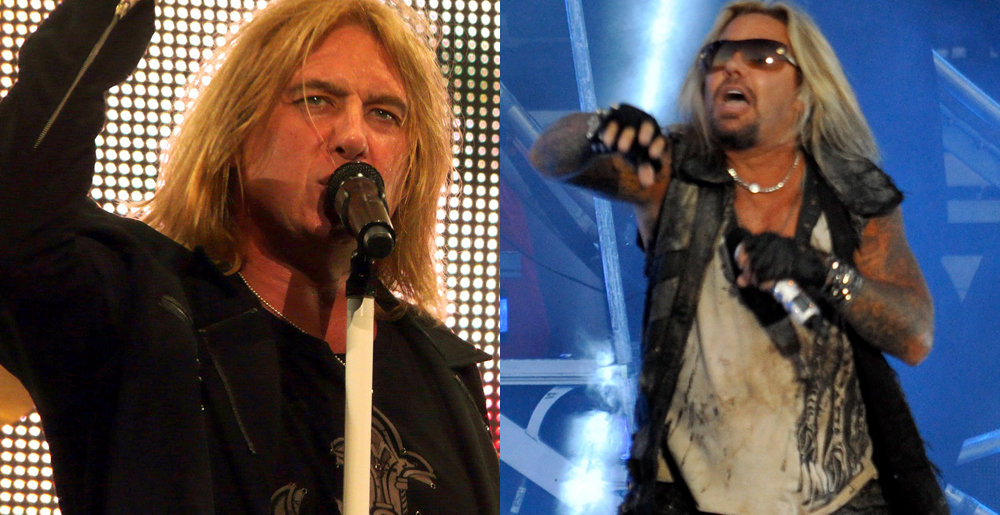 As you’ve likely noticed if you’ve been paying attention to metalheads on social media recently, a lot of people are not happy that Mötley Crüe are getting back together… and not just because Tommy Lee is a dum-dum. It’s only been four years since they broke up, and they went to such great lengths to convince people they were done for really real that they staged a publicity stunt in which the band signed a contract saying they could never tour again. And obviously plenty of bands renege on break-ups, but the speed with which the Crüe did it… yeah, it left a bad taste in the mouths of some fans.

But there are people who don’t mind… and unsurprisingly, one of those people is Def Leppard singer Joe Elliott. ‘Cause. Y’know. Def Leppard are touring with Mötley Crüe (and Poison and Joan Jett) in the summer. So the reunion is obviously working out pretty well for Joe.

When asked by Rolling Stone if “it was wrong of Mötley Crüe to go back on that [retirement] contract,” Elliott responded:

“No. This is not a divorce where you’re cheating on your wife. That, to me, would be wrong. If the president of a country or the ruling government of a democracy said one thing and then did another, that’s wrong, because it’s real and affects people’s lives. This is rock & roll. Lighten up. It’s four guys that had enough of each other for a while and after five years, they’ve fallen back in love again. Fucking get on with it. I’m happy for them. It’s great for them — and us as well.”

For the record, the Mötley Crüe guys have definitely cheated on their wives, too, but I get Elliott’s point.

You can read the rest of the interview here. Other topics of discussion include whether or not Def Lep will ever do a farewell tour, why there won’t be an all-star on-stage jam as part of the stadium tour, and how the whole trek came together in the first place.

The tour begins in July. Tickets go on-sale beginning Friday, December 13 at 10am. Dates are below.