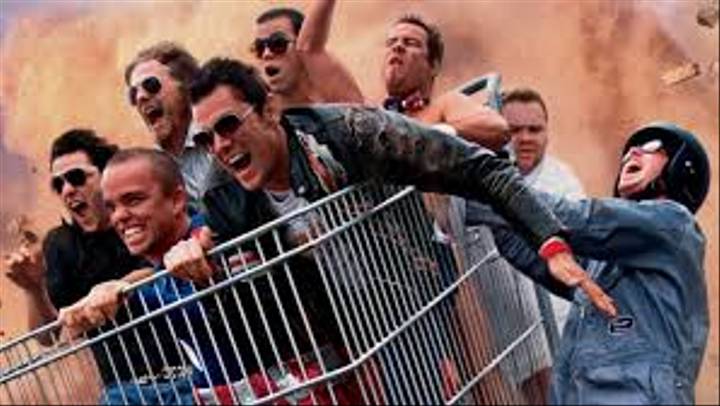 I don’t know about you all, but I still howl at the TV any time I catch a glimpse of the original Jackass TV show or any of its films. Riveting, ground-breaking, unadulterated hilarity! If you don’t think Jackass is funny, I’m not sure we can be friends.

It’s been nine years since Jackass 3D hit theaters (3D poop was unquestionably the greatest use of that technology EVER!, and by the time 2021 rolls around it will have been more than a decade… but, good news, the crew is getting back together for a fourth film set to be released that year! Deadline reports a March 5 release date via Paramount before making sure to note that the franchise was brought in $335 million to date. Shew, no wonder they’re making a fourth.

Old pal Johnny Knoxville is back on board, and it seems likely that Jeff Tremaine is, too: he directed the first three films, as well as the “Jackass Presents…”-labeled 2013 movie Bad Grandpa. But beyond that we don’t know much. Cast member Ryan Dunn passed away in 2011, Bam Margera has been publicly struggling with substance abuse of late, and Steve-O recently appeared in a Hank Von Hell music video.

Stay tuned. This is gonna be cool.

Sponsored Links from Across the Internet
Show Comments
Related Articles
This Sucks 0
Jackass Star Bam Margera Returning to Rehab After Bailing on Treatment and Intervention from His Parents
June 28th, 2022 at 11:08am Emperor Rhombus

Crisis Averted 0
Congrats: Bam Margera Completes One Year of Rehab
May 17th, 2022 at 11:53am Emperor Rhombus

Bam will remain near his treatment center and continue to take classes.

Reunion Mania 0
A New Jackass Series Is Coming to Paramount+
May 3rd, 2022 at 2:19pm Emperor Rhombus