Metal Sucks
Metal Sucks At the Drive-In / The Mars Volta’s Cedric... Kirk Hammett Says Metallica “Did Not Make a...
- Tweet SHARE
Enlarge
What the...?? 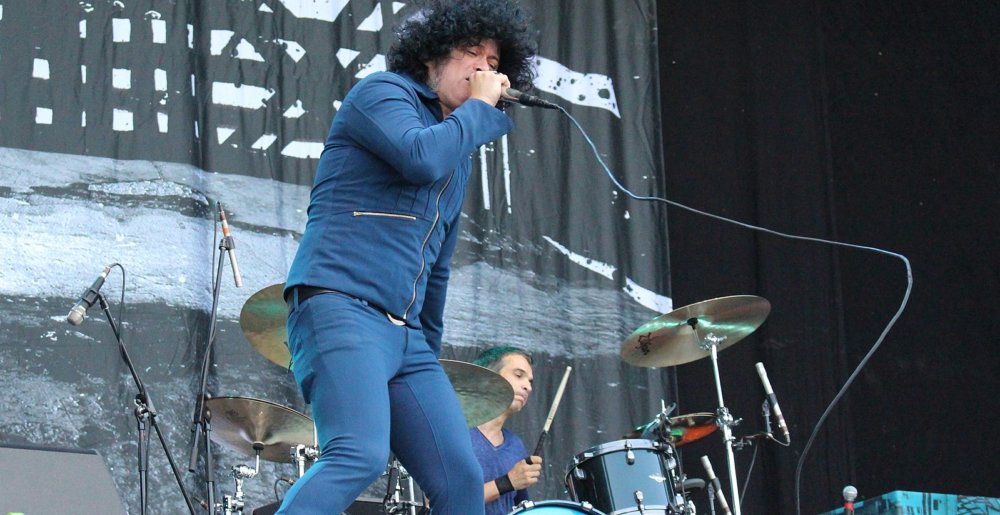 Cedric Bixler-Zavala, frontman for The Mars Volta and At the Drive-In, has accused Scientologists of poisoning his family dog. This is the second pet Bixler-Zavala claims to have lost to vengeful Scientologists, who he says used rat poison wrapped in raw meat left in his yard to bait the dog.

Before we get into the details surrounding that humdinger of an allegation, a little background first.

Cedric and his wife, Chrissie Carnell, were members of the Church of Scientology, Chrissie since the late ’90s and Cedric for a brief period in the mid-2010s. Since then, Cedric has been a vocal critic of the organization, most visibly in 2017, when he published a series of tweets accusing the “church” of covering up for one of its members, actor Danny Masterson (best known for his role on That ’70s Show). Chrissie was one of several women to accuse Masterson of rape, after which Bixler-Zavala alleges the couple were the focus of targeted harassment by Scientologists, and that the authorities were of no help whatsoever because “Twitter, TMZ, LAPD are all bought and paid for.”

Cedric also alleged at the time that their family’s previous dog was poisoned by Scientologists, saying “Now the ashes of my dog sit staring at my family in our living room. Coincidence ? I’d love nothing more than to get taken to court so that all parties involved can get deposed. How u doing Marty Singer? How’s that Cosby $ treating u?” Marty Singer was a lawyer for Bill Cosby’s defense, and had been sending Cedric cease-and-desist letters regarding his tweets about Masterson.

Since then, Cedric has continued to use his social media accounts as a platform to both detail the harassment he and his wife continue to endure and to call out well-known Scientologists, including Beck and Juliette Lewis. The couple claims their car was broken into and their tires slashed, people parked in vans outside their home filmed their family, their home security system has been hacked multiple times, people have targeted them on social media, they have been subjected to fraudulent credit schemes, and Craigslist ads have have been posted soliciting sex in Chrissie’s name with the threat of releasing nude photos.

Which brings us up to the present day: the At the Drive-In / Mars Volta frontman recently shared a series of Instagram posts in which he alleges that Scientologists once again poisoned one of their family dogs, and that the animal needed to be put down as a result. One photo shows a small green block wrapped in raw meat, while the next photo shows a screen shot of an identical item from the Pet Poison Helpline.

“I’m at the vet dealing with another hurt animal. This is what I’ve been finding in my front and backyard. This is what scientology does when you speak about the predators they protect.”

A day later Bixler-Zavala offered an update, explaining his beloved pet had to be put down:

“We had to put her down today. This was the result of eating rat poison rolled up in raw meat. This is the 2nd dog we’ve had to put down due to the harassment from private investigators and Scientologists. This only makes us stronger. My boys named her biscuit. They still don’t understand what’s happening. We said goodbye to her and let her go peacefully.”

A note written by Chrissie, reposted by Cedric, details the gruesome nature of the dog’s death:

“She died in my arms today. A team of vets and the ASPCA’s poison department just confirmed she was fed a brick of flavored rat poison. She was supposed to turn a year old this week. They fed her the most lethal kind. The one where she bleeds out internally. Her lungs were filled with blood. Blood was dripping from her nose and mouth. I’m destroyed.

“The ASPCA opened a case file on it. They re sending me the medical file to then go file a police report here. My kids could have died or gotten extreely ill. They’re always out finding treasures. Always putting their hands in therir mouths.”

Then, yesterday, Cedric posted a screen shot of a lengthy note from his phone in which he calls out several Scientologists, the identities of whom aren’t clear, using a number of vague references. That note reads as follows (edited slightly for clarity):

“I will not shut my mouth about this shit. Clearly you repugnant pieces of shit don’t want my wife and I to tell our story. We most certainly have some interesting receipts that can tie a whole fuck load of xenu sympathizers and xenu soliers to these rapes. Never trust a Scientologist who tries to co-opt the me too movement. Never trust an artist who is still friendly with their Scientologist celebrity pals. You know who I’m talking about. Go ahead and scroll past this and turn your blind eye. This whole bullshit idea of tolerance is a very convenient way of you hiding your head in a hole while you ‘separate’ the artist from their ‘spiritual’ beliefs.

“You go ahead and take gigs with these people. You would be an utter fool to think that the money you help make on tour with these sheep doesn’t go back to celebrity center. If Beck can leave what the fuck is your chicken shit excuse? You gotta wonder what kind of dirt they got on you from your auditing sessions or your time on the purification rundown. ‘They’ pass your folders around and own you. You would be surprised who is in whose pocket.

“So here’s a special shout out to all the Powerful Cats, all the midnight vultures, all the friends of Earl, all the Berric troops, all you owners of hip red bag coffee, all you Stoned owners of Harvard, all you House Geisha dwellers, all you managerial pieces of shit repping strokes of luck, all of you Oscar stylists, all you deadly little Sarahs, all you post apocalyptic soldiers fighting zombies in Atlanta, all you black cube thugs, all you newly indoctrinated ‘people of the sun,’ all you poser hags wearing Native American regalia for purposes of rock stardom. I see you. I see what side of HERstory you are on.

“And finally, to our beloved horse fucker Bijoux. Swab your mouth all you want, you ain’t African American. How’s that new kidney treating you? Probably best to stop drinking. Not everybody can afford something so ephemeral as a fucking kidney. I loved you in the movie Bully. So method.”

Bijoux is Bijoux Phillips, Danny Masterson’s wife. Aside from that I have no idea who all the various references refer to, although in a reply to a commenter, Cedric offered “just switch the words around and look up the owners.” One commenter appears to have sleuthed out that “Newly indoctrinated people of the sun” refers to Rage Against the Machine drummer Brad Wilk, while another points out that “all you deadly little Sarahs” refers to the rock band Dead Saras. Other than that, it’s anyone’s guess: have any of you been able to figure out to whom else Cedric is referring?

MetalSucks has reached out to Cedric for more information. If we hear back, or if we become aware of any new developments, we will keep you posted.

Check out the funky new track from every hipster’s favorite band.

An entire album of early recordings that would later become ‘De-Loused in the Comatorium’ is coming out in April.