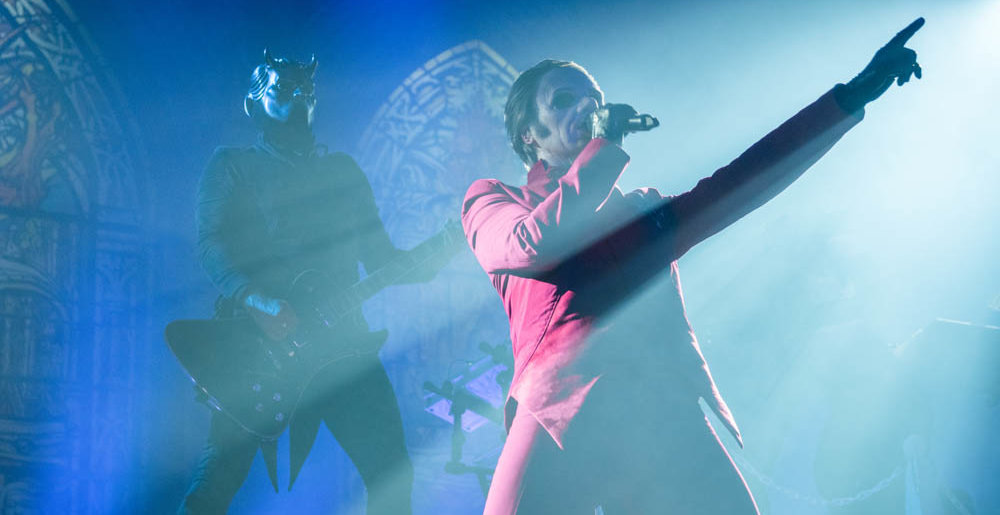 2020 will be a year conducted mostly behind the scenes for Ghost, who are currently working on some sort of special one-off single before diving into their next album wholesale, planned for release some time after the U.S. presidential election. But that doesn’t mean that in the interim there won’t be all sorts of press bits about what the new album might be like, or reflections on the past couple of wild years for the band — anyone wanna take bets on how many media outlets (including this one) run headlines with a pull quote about whether the new album will be “heavy” or not?? — and today we have just such an article from Kerrang!.

First, Metallica, because everyone loves Metallica. One might imagine that opening for Metallica on an entire tour last year might’ve been a head trip for the band, and in some respects it was, but frontman Tobias Forge is pretty even-keeled about the experience, having previously toured with other massive bands like Iron Maiden:

You did a massive European tour with Metallica over the summer as well. It sounds like you had a terrible year…

“That was a very cool tour. I ticked off a lot of venues I dreamed of playing. When you’re being asked to support a big band, because they want to give you their support, that makes you very strong as a band. I think if you ask Bokassa as well, they’d probably say the same thing. They were there on the initiative of Metallica, which is such an endorsement that you’d be crazy – or stupid – not to do it.”

Still, it must be a hell of a job, warming up a Metallica audience?

“There’s pressure, but we’ve done it before, opening for other bands in similar settings. So I didn’t feel the same pressure as I would have felt five years ago. I mean, we had the luxury of doing it 25 times! So you get accustomed to the stage, to the format, and you know the crew. It was a full-production tour where Metallica had their own stage, as well, so nothing really changed in a sense, except the views from the stage.”

Here’s the bit about the next album, which doesn’t reveal a whole lot other than that Forge is, as usual, thinking and planning far into the future:

Did it feel good to wrap up the year with such a momentous show?

“Of course. It was important to wrap up the year on a high note. We’ve achieved a lot, and that has left me feeling inspired to go back into the studio. We’re already conspiring a lot about the next couple of years. So we’ve already got some things in motion.”

That shouldn’t be too surprising: a band at Ghost’s level necessarily needs to plan that far out. Despite not one note of new music having been put to tape for the new record, they’ve likely mapped out an approximate release date (or at least release month), rough time periods for when they’ll tour certain countries/continents, and they may even be engaged in discussions for some of those tours. It’s weird to think about, but at this point Ghost likely already have all of 2021 penciled in.

Back to us, we’ll just be here waiting. Waiting for the next quote about how “heavy” the new album will be and eagerly anticipating headline$ about the next Papa Emeritus.

Metal Sucks Greatest Hits
0 -
It’s Official: There is Too Much Slayer Merchandise
0 -
Ex-Attack Attack! Vocalist Caleb Shomo is Smarter than John Holgado
0 -
Why are metal fans hopelessly stuck in the past??? :(
0 -
Rigged: Wintersun
0 -
Editorial: Your Dead Metal Heroes Were No Angels
0 -
Video: Killswitch Engage’s Adam Dutkiewicz Wins Everything on The Price is Right