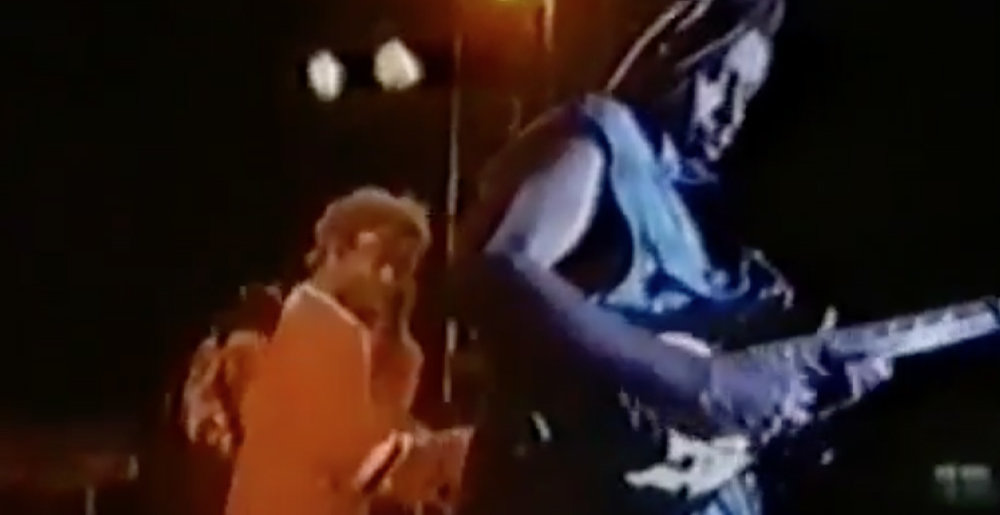 Classic Concert of the Day: Living Colour in Bologna, Italy, 1993

To help pass the time, we’ll be periodically sharing a classic metal concert. Watch some of it, watch all of it, watch only one song… we don’t care! As it long as it provides you with a bit of entertainment.

In March of 1993, Living Colour released their third full-length studio album, Stain. Although the record was met with a mixed critical reception and ended up being the New York City quartet’s final offering for a decade, it’s the opinion of your MetalSucks editors that it may very well be the band’s masterpiece. More Livid than Vivid, Stain is the heaviest, angriest, most invigorating album the band has made to date, offering only one song — “Bi” — that includes a dollop of the playful humor that sometimes punctuated the band’s earlier work. From the opening track “Go Away” (“I see the starving Africans on TV/ I feel it has nothing to do with me”) to the album the end-of-Side 1 cut “Auslander” (the German word for “foreigner,” featuring the chorus “Everything that I want, isn’t it everything that you’ve got?”); from the Side 2 starter “Never Satisfied” (“I will never be satisfied until it ends in tears”) to its concluding song, “Wall” (“The walls between us all must fall”); from its title to its very cover, which trades the more abstract art of the group’s first two releases for agonizingly direct portrait of an African slave; Stain has an undeniably gloomier, more furious tone than anything Living Colour had ever made before (or have ever made since, for that matter).

27 years later, Stain tragically feels just as relevant as it ever did. So it seemed only right that today’s classic concert should be Living Colour’s performance at Arena Parco Nord in Bologna, Italy on June 11, 1993. Although the setlist is split pretty evenly between Stain, 1988’s Vivid, and 1990’s Time’s Up, the band’s vibe is palpably incensed: note the way singer Corey Glover seems to be trying to break through the stage floor with his mic stand, or how guitarist Vernon Reid hops up and down as though he literally cannot contain all of his energy, and it’s easy to see that, yes, this is the Living Colour that made Stain. Being pissed-off has rarely felt like such an ethical imperative.

The duo obviously decided that their solemn tribute to Ukraine was lacking.

The duo get serious for a second.

Metal Sucks Greatest Hits
0 -
Just in Time for Passover: Big Four Yarmulkes?!?!
0 -
Twenty Hard Rock and Heavy Metal Celebs’ Mugshots
0 -
Scientific Proof That Djent is a Genre
0 -
Converse Rubber Tracks x MetalSucks: Everything All in One Place
660 -
KNEEL BEFORE THE POWER OF ELEPHANTS MARCHING RIFFS
0 -
Who are teh “BIG FOUR SCENE BANDS”????