Attila frontman Chris Fronzak has been accused of sexual misconduct with a minor. The woman in question, who goes by the name Roxy Vienna, says she was underage at the time of the alleged encounter in 2018. In a response, Fronzak admits that while he did once hook up with Vienna while she was underage, it was only after she lied to him about her age, even going so far as to produce a fake ID. He also claims that an ex-girlfriend, vengeful because of Fronzak’s infidelities, is behind the attempt to paint him as a sexual abuser.

Vienna initially made the accusations via a series of social media posts:

“Fronz has manipulated and guilt tripped me into sleeping w him, even when i was underage. He got me drunk at every show of theirs like really drunk to the point where i blacked out for several hours. He then used me in that state to get me to consent to things i didn’t want to do.

“We started talking a couple hours before we first met at a show in europe in 2018 when i was 17. Before they played their set we started drinking a bit and i felt quite drink already. After the show tho is when he got me really drunk.

“Then he kept telling me how pretty i am and that i should come join him in the shower to hook up.

“We ended up having sex in the shower. After that i blacked out for several hours i think. I know we hooked up a second time in his bunk but i was so drunk i wasn’t in the right state to consent. I also only remembered that this happened like a month after the show.

“I must admit i wasn’t being honest with him and told him i was 19. I know this is gonna make people question everything but that’s what happened so i’m gonna say it. I did this because I was kind of a fan and would’ve done anything to make them happy and get closer to them and -i honestly thought i would never see him again anyways, let alone thought that we would hook up. But i’m pretty sure even if i would’ve told him my real age the story wouldn’t have changed. A year later they were back on tour in europe and he had messaged me a couple months–before that he wants to hang out with me again. After that he had gotten a gf so i didn’t think anything would happen again and was comfortable with going to the show. This time a friend was with me. Oh boy was i wrong.

“At that the show he always got me really drunk and he knew what he was doing. He kept handing me drinks telling me to ‘down all of it”

“After their set when everyone was packing aways he messaged me this. (Leaving out my friends name for privacy)

“We then hung all hung out in the bus and he kept asking me to hook up and i told him no several times because he was in a relationship. When that didn’t work he whispered in my ear that he knows about my secret. I asked him what he meant and he said–“i know you lied to me about your age and i don’t even care but now you have to make it up to me”!!! (I told everyone at that show my real age keep that in mind) This man tried to guilt trip me into sleeping with him. I still kept saying no.

“At one point he even tried to drag me into his bunk and i had to hold onto smth so that wouldn’t happen. I’m sure he was just making a joke but it still really upset me and freaked me out.

“In the next screenshots you can see how much he tried to get me to hook up and after he repeatedly saying no he just replied with ‘k’ and seemed really pissed.

“When you’re that young and look up to someone you just don’t want to get mad at you and are easily manipulated into things you don’t even wanna do. I didn’t realize how wrong all of that was until recently. I still feel guilty about lying to him about my age and i know that–was not okay in any way but neither is what he had done. And i know i wasn’t the only person he did this to. He’s aware of what he’s doing and is using his power to manipulate younger girls. Please don’t fall for the same mistakes i did.

“I personally don’t even mind that i was so young, this isn’t my main point. My main point is that he is manipulating and guilt tripping in order to get what he wants.

“I also just wanna add if there’s anyone else who has a similar story you can talk to me! Or if you’re comfortable enough you can add to this. I wanna try and help all of you!

“Girls have been coming forward telling me the same thing happened to them. This isn’t a coincidence. He knows what he’s doing. (The girl that sent me this wanted to stay anonymous) 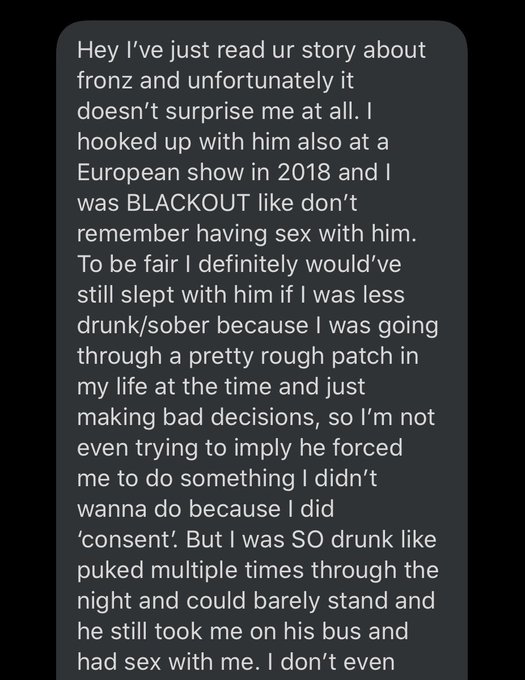 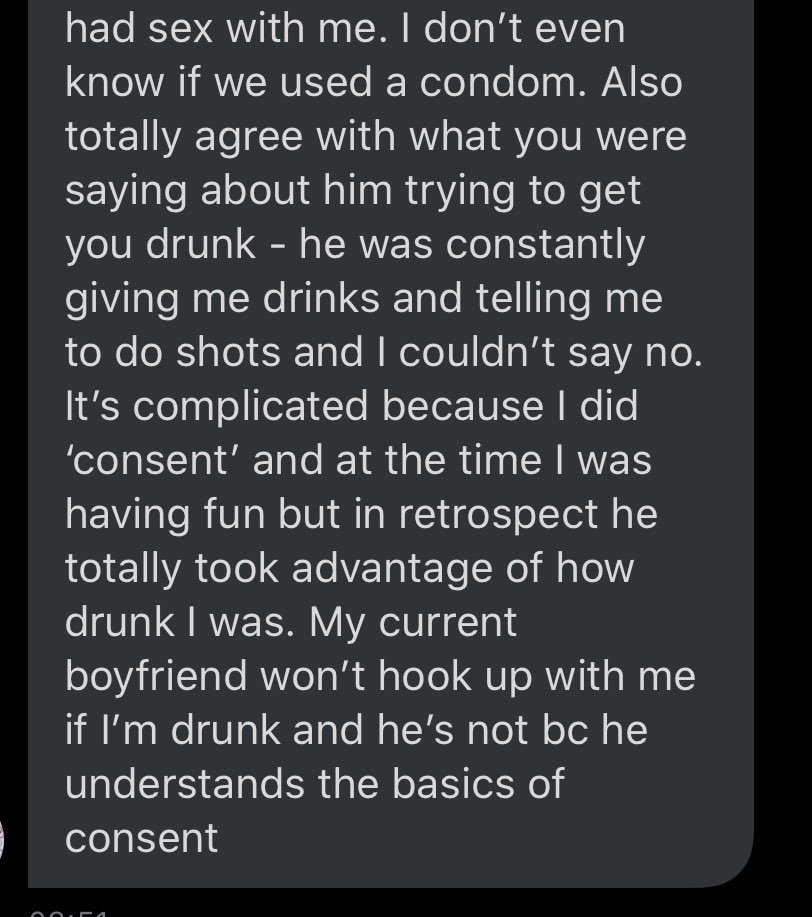 Fronz has since issued a video response, the transcription of which you can read below (via Loudwire):

“Hey what’s up, this is Fronz, and as you know there’s always two sides to every story. So here’s my side: first things first, I am not a pedophile, I have 0 desire to hook up with anyone underage and I’m strongly against that. At the end of 2018, my band was on tour in Europe and when we were on tour in Austria I met up with a girl named Roxy Vienna. I didn’t seek this girl out, she was simply in my green room, already drinking. We had some drinks together, we had a really good time.

“And as things started to heat up, I asked her her age in which she proceeded to tell me she was above age. I checked her ID, in which she had a fake ID that said she was above age. We hooked up, that was that. Flash forward a year later it’s 2019—end of 2019, we’re back on tour in Europe. She comes out with her friend—they always come out together. It’s fun, we vibe, we drink. Once again they’re backstage, already drinking.
You guys know me, I’m in Attila, I’m very hospitable. Any guys, girls, guests—I’m always giving them drinks. I’m not forcing people to get drunk. I just want everyone to be happy and comfortable, that’s it. So we’re having a great night, once again, not a big deal, no one was blackout drunk. We had an early bus call that night so we didn’t hook up. And the next day Roxy messages me saying ‘I really regret not hooking up with you, me and my friend want to come out again to another date, so we can do it.’

“And it’s at this point where she explains to me that she in fact lied about her age a year ago. Which was really offsetting and I’m upset about myself for knowing that and still hanging out with her, but we had a good time that night, once again, nobody was blackout. We hooked up and that was that. Since then we still talk. We’ve FaceTimed since that tour. We text, she sends memes in my messages and stuff. And I think that’s part of why I’m confused right now.

“But I also have very strong reason to believe that my ex-girlfriend is playing a very large role in this—in fact I know she is. She’s very upset at me because I cheated on her. And I regret that, I made a mistake, I cheated on you. I’m sorry. But I really don’t think that this is a justifiable cause to come out here and try to ruin my life because you’re upset that I cheated on you.

“Because I know that you’re teaming up with Roxy to do this and it’s making me really upset. Like, I’m very proud of what I do and everything I do is to support my family and my children. And you’re really… it’s really messing with me and I’m really upset. But that’s all I’m gonna say. I’m not gonna further dive into this topic right now. But I do have a lawyer, so if anyone has any additional concerns, I will happily link you to my lawyer and that’s all I have to say about this situation.”

To back up his claims, Fronzak also shared what he says are screenshots of a text exchange with the friend who always accompanied Vienna when he saw her:

“I never said you raped me. Dem said that and i just sent a screenshot to her. We all talked in the gc about how someone so drunk can’t consent. I never said NOTHING was consensual, literally never said that to anyone. I literally texted w her at the first show”

You can view Fronz’s video responses below.

He was joshing us.

The threats stem from “the misinterpretation of our song’s lyrics on a social media platform.”

Metal Sucks Greatest Hits
0 -
The Single Greatest Analysis of Nickelback’s Work Ever Written
1840 -
The Final Word on Metal Drumming
2860 -
What is the Best Christian Metal/Hardcore Band???? [you’re moshing 4 Christ]
540 -
Worst Year Ever: All of Our 2010 Year-End Sh*t in One Place
0 -
That Time Shaun Got Drunk and Filmed a Music Video with His Cat
0 -
So As it Turns Out, Banging Your Head a Bunch Can Be Bad for Your Brain