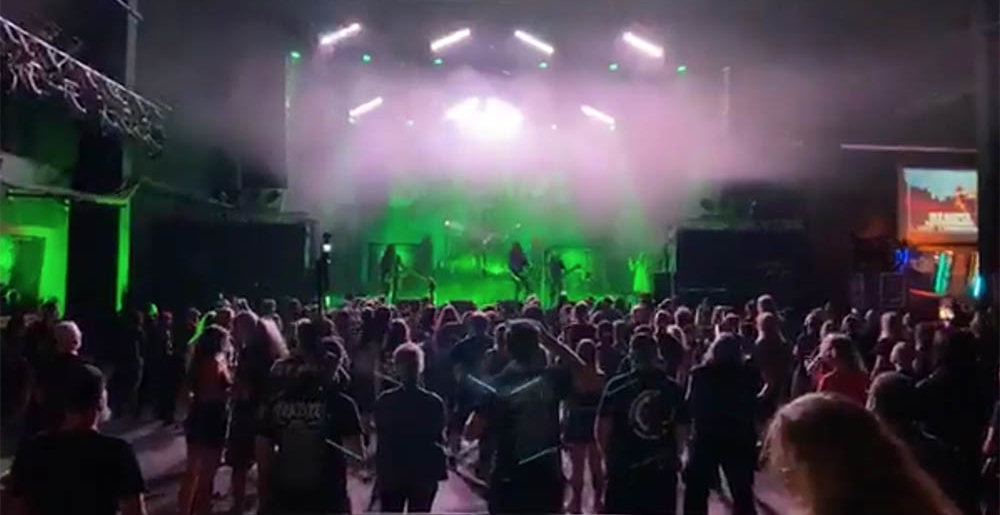 I don’t wanna hear about your buddy that performed a set on the patio at the Chug Suckle, or how a bunch of local bands teamed up for a socially distanced benefit in the parking lot of the local venue. That’s all well and great, but I think we can all agree that when we’re talking about “the first metal show since Covid-19 hit” we mean bands that folks all over the world have heard of performing real concerts in a real venue with a real audience present. A return to concerts as we sorta know them, in other words.

And so, this is it: as planned, German metallers Destruction performed at the Z7 club in Pratteln, Switzerland on Saturday, July 4. Naturally there is already video of the show, which saw the band perform to 300 people in a 1,600 capacity venue to ostensibly allow for social distancing, and you can watch that below.

First thoughts: I do not get the impression all people were social distancing at this show. It’s admittedly hard to tell given the camera angle, and it does seem like folks in the back half of the room are standing far enough apart from one another. But even so, as folks in Texas, Florida, Arizona and other current pandemic hot spots have recently learned, being indoors at all, even with social distancing, gives the virus plenty of chance to spread. What’s more, it appears that the closer to the stage people got at this show the less far apart they were — just like any show although, again, the camera angle makes it difficult to tell — which is, like, really not good.

That said, as far as places to try this experiment, Switzerland is not a bad one. The country has only had 32,315 reported cases of Covid-19 and 1,965 resulting deaths after imposing strict limitations on life in the early days of the pandemic. Cases have begun to tick up recently, however.

Z7’s summer concert series features one show per week. The venue has said they would be enforcing social distancing and sanitary measures, and all attendees are being asked to sign and bring a form indicating their understanding of certain criteria.

Here are this week’s heaviest new releases, including albums from Destruction, HEALTH, and more!