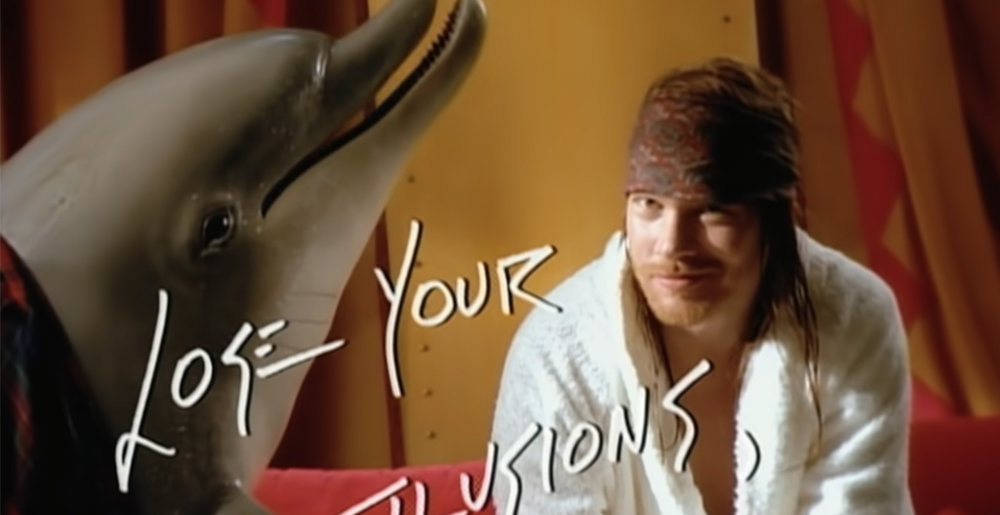 Ah, the great Guns N’ Roses video trilogy of 1991 – 1993: “Don’t Cry,” “November Rain,” and “Estranged.” It’s probably impossible for younger readers to conceive of how popular those videos were nearly thirty years ago. They were on MTV CONSTANTLY. An opaque mish-mosh of sometimes seemingly random elements — Dolphins! A dead bride in a weird mirrored casket! Axl Rose naked and green! Slash misplacing wedding rings and rising from underwater! — fans picked apart the details endlessly, trying to figure out the “meaning” of the clips (spoiler alert: the “meaning” of the clips was to sell records). When the “Estranged” video debuted, it was so hotly anticipated that MTV literally played it twice in a row, which is, to the best of my knowledge, the only time the network ever did that.

In addition to being bizarre, the videos were also incredibly expensive: the combined budget for the three clips was reportedly $7 million, more than half of which was for “Estranged” alone. Adjusted for inflation, that’s roughly $12.6 million — just a few million shy of the reported cost of Chinese Democracy. Quentin Tarantino’s Pulp Fiction, which came out a year after “Estranged,” was made for $8.5 million. The cost was presumably offset at least somewhat by sales from a series of accompanying behind-the-scenes documentaries, Making [email protected]*!ing Videos, which were released on VHS in ’93. But still.

Unsurprisingly, Andy Morahan, who directed all three videos, got some pretty good stories out of the whole experience, some of which he shares in a new interview with Kerrang!.

For one thing, the director says that the band, who would ostensibly break up a few years later, were already falling apart on set:

“It was quite interesting as the band was pretty much in a state of flux anyway. It was at that time where the Use Your Illusion albums had come out, but [guitarist] Izzy Stradlin had left the band, which Axl was very upset about. Izzy had taken himself out of the loop, Axl was getting pretty… cranky about the dynamic of the band and trying to keep the whole thing together, and there were a lot of personal issues going on. The whole thing was a bit fractured. I think the videos, if they are a reflection of anything, show the fractured nature of where the band were at that time. It was all falling apart at the seams. In that sense, the videos are less of a coherent story and more a reflection of the band.”

After comparing the band members to “vampires” (“[T]heir hours were from when dusk falls to when the sun rises”), Morahan goes on to explain how egos were also a major obstacle to getting anything done:

“The dynamic was difficult. I was wrangling not only the creative forces – Axl and Slash at that point – while also having to go and have meetings with the other members of the band to tell them what was going on. I’d have Duff [McKagan, bass] asking, ‘Axl has his big bit, Slash has his big bit, what’s my big bit?’”

Still, he has mostly kind words for Rose:

“He wasn’t difficult, it just depended on what was going on in his life on that particular day – sometimes he was in the mood for it, sometimes he wasn’t. But he was good fun. The weird thing about Axl is he’s a very shy bloke, very clever and very smart, and he’s very protective and very loyal and he doesn’t give it away too easily.”

He also explains those infamous dolphins in the “Estranged” video:

“Axl had split up with [model] Stephanie Seymour [who starred in the ‘Don’t Cry’ and ‘November Rain’ videos], and he was like, ‘I don’t want any more beautiful girls in my videos; I’d rather have a dolphin.’ We knew that we were deliberately doing that so people would go, ‘What’s all that about?!’ There was a sense that it was throwing up a lot more questions than answers, and that suited everybody – it created a myth and intrigue around the whole trilogy.”

As for his take on what the videos are “about,” Morahan explains:

“The videos became an abstract canvas of a few original ideas about Axl’s inner-most thoughts, but really – and I hate to say we ‘lost the plot’ – it just became a bigger canvas as more people got involved.”

So that clears that up. Or not.

You can read the entire interview with Morahan here. The videos, and select clips from all three volumes of Making [email protected]*!ing Videos, are available for your viewing pleasure via the below playlist.

Metal Sucks Greatest Hits
0 -
So As it Turns Out, Banging Your Head a Bunch Can Be Bad for Your Brain
0 -
Iudicia is Your New Favorite Band
0 -
Advanced Discrimination & Dragons: A Critical Look at Varg Vikernes’ Myfarog RPG
0 -
L.A. Band Threatin Faked a Fanbase To Land a European Tour No One Attended
0 -
The Top 25 Modern Metal Frontmen: The Entire List in One Place
370 -
Rigged: Devin Townsend’s Massive Live Rig, Piece By Piece