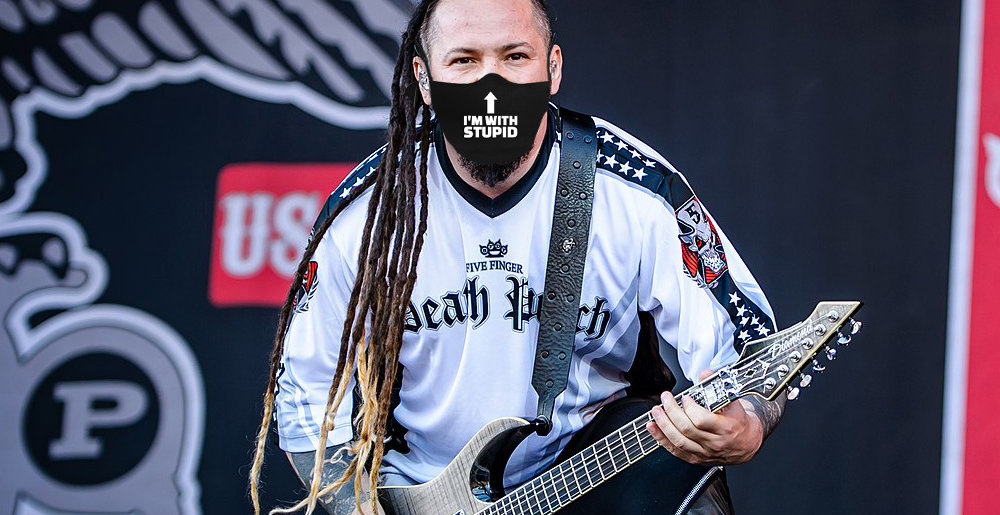 Five Finger Death Punch “guitarist” Zoltan Bathory has rebuked those who interpret the band’s new music video, “Living the Dream,” as having an anti-mask message.

This despite the video including a scene where citizens who wear face masks are labeled “COMPLIANT” by a maskless older woman wearing a pin with the Chinese flag and the word “EXEMPT.”

Bathory has since taken to social media to share a nonsensical response, which I assume he either dictated to a toddler or typed while having a stroke. That response is below, is along with my own running commentary:

“As much as some *news sites* used ‘anti-mask’ as a clickbait title (And I must applaud the capitalist in them or I myself would be a hypocrite) Let’s make this crystal clear: In a fictional story, Amongst shopping cart zombies, Tide Pod eating fat superheroes and all the other metaphors, why would anyone think the mask scene isn’t one.”

Annnnndddd we’re off to a strong start, as Bathory quickly demonstrates that he does not understand what a metaphor.

The zombies hoarding toilet paper is a metaphor, because a comparison is being made between people who bought tons of toilet paper during the pandemic and creatures generally known for being mindless. “Mindless zombie” is, in fact, already idiomatic shorthand for “someone who does not or cannot think for themself.” So whether or not you agree with the message, it is, clearly, a metaphor.

Someone wearing a pin labeled “EXEMPT” giving someone else a pin that says “COMPLIANT” after that person agrees to do what they’re told is not a metaphor. It is, in fact, quite literal. You could call it satire, I suppose (although it wouldn’t be very good satire), but you cannot call it a metaphor.

The masks themselves, however, do become metaphors, later in the video, when the people rise up against Ms. “EXEMPT” after they see her gimps attack an ice cream truck that’s displaying an American flag (p.s., the ice cream truck is also a metaphor, albeit, again, a very broad, easy-to-decode one). Before launching their insurrection, the common folk all tear their masks off. So the mask becomes a metaphor for denial of freedom.

But the fact that these masks aren’t the least bit fantastical, and that there is currently a heated political debate around their necessity, makes the meaning of this metaphor very clear: MASKS = OBEDIENCE. That is what people are pissed off about; at a time when a lot of people are refusing to wear masks, the video is explicitly telling them that they’re making the strong, “American” decision. I can’t tell if Bathory legitimately doesn’t understand that or he’s full of shit. Either scenario makes him look bad.

“The scene in question is not about the masks… it’s NOT an Anti-Mask message… … in fact you can go to FiveFingerDeathPunch.com Right now and buy some cool ones…

I must applaud the capitalist in them or I myself would be a hypocrite.

“If I must explain this

The whole video is in the frame work of fiction, a dystopian nightmare of one of the founding fathers – right before he signs the constitution.”

Yes that is very clear from the video, which is about as subtle as Ivan Moody’s face tattoo. But, again, it’s FICTION MAKING A CLEAR COMMENT ON SOMETHING NON-FICTIONAL OCCURRING RIGHT NOW BY USING COMPLETELY LITERAL IMAGERY. It’s not like, say, the Twilight Zone episode “The Monsters Are Due on Maple Street,” wherein the creators commented on McCarthyism without ever making reference to McCarthy, Communism, or the United States government.

“Just as I prefaced it: ‘We as artists, have a unique opportunity to portray and ridicule the absurd to prevent it from *becoming* reality.”

“The mask segments are about hypocrisy on the highest level. When the rules are made for you but those who made them are exempt. Pretty much the standard in all dictatorships and totalitarian regimes (I had the displeasure of growing up in one) hence the reference.”

This is a description of Donald Trump coming from a guy who endorsed Donald Trump. So. Gimme a fucking break, dude.

“I often say, ask us!!! The immigrants… the Cubans, the Venezuelans, the North Koreans, anyone from the former Soviet block… Talk to us and we will tell you …. WE were lucky, because we had a place to escape to. We are fortunate that we could come here…. but If America is gone, where will you go?”

I dunno, someplace they don’t greet refugees by caging their children.

“We immigrants also remember how our freedom slipped away, how our rights were ripped from us, how we were kept under the thumb and in fear of our own governments. So maybe, just maybe… we have valuable experience we can tell you about, we can forewarn you of the things we have seen before.”

I agree. The very few members of my family who successfully evaded the Nazis have been warning me about assholes like Trump for decades.

“So We the people must do everything in our power to stay free as a society. We must prevent the rise of tyranny in all shapes and forms, we must resist the would be dictators and the totalitarian ideals. This is what the founding fathers worried about and tried to prevent by creating the constitution. Believe it. America is a miracle, and I LOVE this country… and I will never shut up about it

The Constitution is a wonderful document. It was also meant to be, y’know, amended. It would be neat if every now and then conservatives remembered that.

It would also be swell if conservatives stopped ignoring the fact that nearly 200 countries around the world also have constitutions. It doesn’t make America as special as they think it does.

Finally: asking people to slightly inconvenience themselves so people don’t die is not tyranny, and claiming otherwise is a dick move.

“Anyway – not anti mask – and If you reduced this entire video to that scene and missed the metaphor behind it … Well… the good news is – It is STILL America so you have the right to have and even print your own opinion.”

This is a manipulative invocation of the First Amendment meant to stir up patriotism in weak-minded fans. For the ten jillionth time, the First Amendment protects speech from the government, and only the government. There is no country in the world where you can’t express an opinion about a shitty nu-core band, except maybe countries where Western culture is banned altogether, in which case you likely have bigger problems than this video. So don’t think, “These bloggers being able to talk shit about FFDP is what makes America great!” Think, “These bloggers being able to call Donald Trump a choad is what makes America great!”

You can watch the FFDP video here.