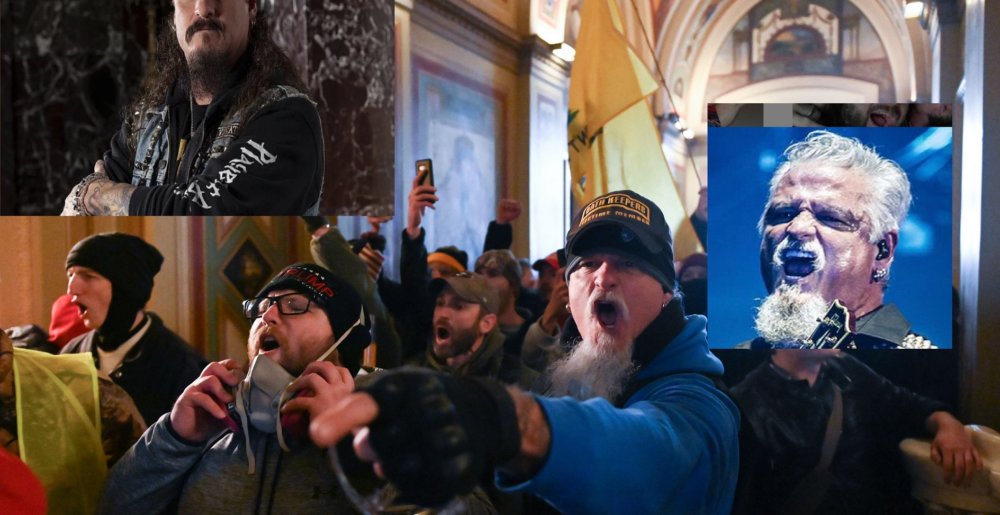 Iced Earth songwriter and guitarist Jon Schaffer found himself in the media yesterday when he was identified as one of the rioters who stormed the Capitol at President Trump’s urging. A photo of the outspoken conservative inside the Capitol angrily pointing forward was widely shared by a number of mainstream news outlets, and metal fans were quick to identify Schaffer by his trademark hair, goatee and wrist tattoo.

Then, today, Washington, D.C. police, working alongside federal investigators, released images of 38 of the rioters — one of whom is Schaffer — who are wanted for “unrest-related offenses.” Authorities are offering “a reward of up to $1,000 to anyone who provides information that leads to the arrest and indictment of the person or persons responsible for a crime committed in the District of Columbia.”

The backlash on social media from the metal community has been swift despite Schaffer’s conservative views being out in the open for years, with many folks renouncing their fandom and threatening to trash their band merch. But the incident has left Iced Earth fans wondering what Jon’s bandmates think: are they embarrassed by his behavior or complicit in it?

We now have an answer about at least one of them. And it’s Iced Earth vocalist Stu Block (ex-Into Eternity).

Block, who is Canadian, shared an image on his personal Instagram account yesterday of a giant red heart with the simple caption, “Nuff said #love.” One now-former Iced Earth fan commented on the post (screen shot below), saying: “I unfortunately can no longer support the band you are in. Much love and respect for you as a person and a great singer but Jon no longer gets a dime from me. I will follow and support you in all future endeavors. I hope Jon realizes that being self centered and ideological does not just affect him but his extended family. God Bless you and your family.” Block’s response didn’t help his cause for being on the right side of history, although at least he wasn’t a dick about it: “t[h]is is your decision and how you feel and I must absolutely respect that.”

MetalSucks has reached out to Iced Earth guitarist Jake Dreyer (also of Witherfall) for comment on Schaffer’s recent actions but has yet to receive a response.

Frequently seen sporting a confederate flag bandana, Schaffer has repeatedly expressed a distrust of the government (with a special emphasis on the federal reserve), claimed that Trump lost the popular vote in 2016 because of illegal immigrants, and said that teachers should be armed.

Meanwhile, in July, Schaffer told MetalSucks’ that he did not believe the coronavirus pandemic to be a real threat, referring to it as the “plandemic,” claiming that coronavirus case counts have been artificially inflated, and suggesting that the current economic shutdown was orchestrated by a small group of global elites with profits in mind:

On top of all of that, in November, the German newspaper Die Welt interviewed Schafer while he marched in a similar demonstration. At that time, he told the paper that “[The establishment] will go under. They mess with the wrong people, believe me.”