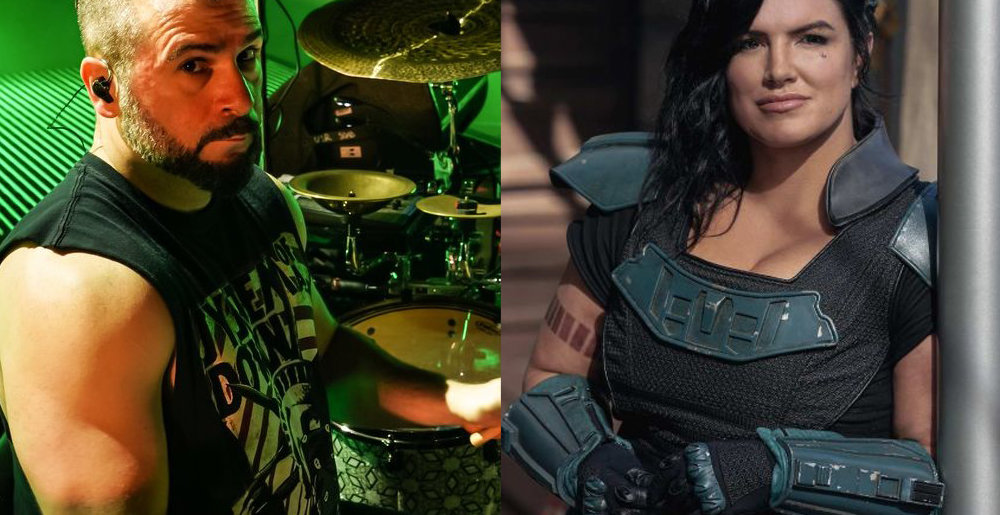 John Dolmayan Supports Gina Carano Because of Course He Does

System of a Down drummer and noted conservative whack job John Dolmayan has released a statement in support of Gina Carano, surprising no one.

Earlier this week, the 38-year-old MMA fighter-turned-actress was fired by the Disney-owned Lucasfilm from her recurring role as ‘Cara Dune’ on The Mandalorian following a series of offensive social media posts. These included disseminating unverified claims that Joe Biden stole the presidential election from Donald Trump, speaking out against wearing masks in the midst of a pandemic, and mocking the trans community — a gesture which seemed especially hostile given that her Mandalorian co-star, Pedro Pascal, has very publicly supported his trans sister.

The final straw came on Wednesday (February 10) when, in a since-deleted Instagram post, Carano compared to the plight of modern American conservatives to that of Jews during the Holocaust:

“Jews were beaten in the streets, not by Nazi soldiers but by their neighbors…even by children. Because history is edited, most people today don’t realize that to get to the point where Nazi soldiers could easily round up thousands of Jews, the government first made their own neighbors hate them simply for being Jews. How is that any different from hating someone for their political views.”

“Gina Carano is not currently employed by Lucasfilm and there are no plans for her to be in the future. Nevertheless, her social media posts denigrating people based on their cultural and religious identities are abhorrent and unacceptable.”

Carano has also been dropped by her agency, UTA, and her publicists, ID PR.

Last night, Dolmayan took to Instagram to defend Carano, asserting that “history will honor” her:

“It takes a lot of guts to put your career on the line for your convictions. History will honor people like Gina Carano and condemn the cowards who instituted woke justice against her.”

Look… if at this point we still have to explain to you that this is not a violation of Carano’s First Amendment rights, or that being a conservative in America today is nothing like being a Jew during the Holocaust, or why you should wear a mask during the pandemic, or why you should respect the rights of the LGBTQ community, then you’ve just emerged from a cave, or you’re a lost cause. So. I’m not even gonna get into all that shit right now.*

I will make the bold prediction that history will not honor Carano. In fact, I’m gonna go out on a limb and say history will barely remember Carano at all. I’m sure she was a fearsome MMA fighter, but she’s a horrible actor, incapable of so much as walking across a room convincingly. Like, all Mandalorian fans should be celebrating her firing, regardless of their political leanings. Carano’s firing is a win for everyone, including Carano, who now has time to work with an acting coach so she can be a little more De Niro in Goodfellas and a little bit less De Niro struggling to read cue cards on Saturday Night Live.

As for Dolmayan, this is just the latest in a string of misguided conservative posts over the course of the past year, which have included calling Donald Trump “the greatest friend to minorities,” asserting that “there is no systematic racism in the United States,” denigrating the Black Lives Matter movement, questioning the legitimacy of Biden’s presidency, and making racist claims about abortions in America. So, y’know, basically pissing all over anything his band ever stood for.

*Actually, I would like to address this nonsense about Republicans being like Jews during the Holocaust, on the off-chance that Ms. Carano reads this: nineteen of my family members were murdered by their own government during the Holocaust. Those who survived did so by running and hiding for, without exaggeration, years. That strikes me as being slightly worse than getting fired from a television show by a multinational corporation. If you really can’t see how your previous assertion was offensive, you may have taken too many hits to the ol’ noggin. Alternately, if at any point the Biden administration murders multiple members of your family, feel free to hit me up and I’ll publish an apology.

Tags: gina carano, John Dolmayan, system of a down