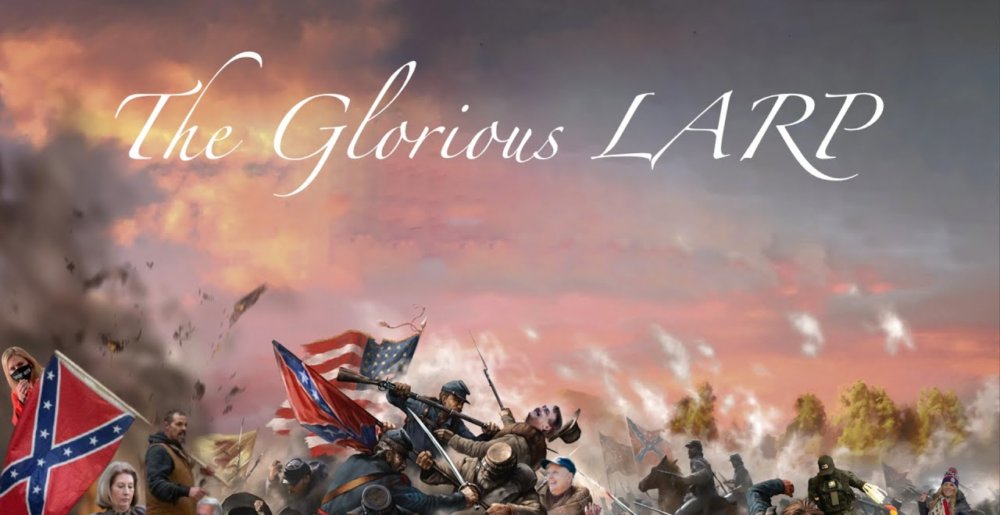 Parody bands are a dime a dozen, and many of them plainly fail at their primary objective: being funny. But every now and then one cuts through the clutter, and today we present you with Flattened Earth, an Iced Earth parody whose debut single, “The Glorious LARP” — a nod to the cosplay events at the U.S. Capitol on January 6 — delivers the lampooning Jon Schaffer deserves.

“Flattened Earth is the world’s first historic reenactment band. It is NOT a tribute,” the YouTube description warns. “We were inspired by the story of Jon Schaffer, confederate flag guitar enthusiast and leader of mid-to-low tier metal band Iced Earth. Now that his band and the events at the capitol are history, this is our musical conception of his experience.”

With music by Brooks Rocco and lyrics by Matt Lee and Rich Horner, the riffs are appropriately triumphant and the words supremely patriotic. Here’s a quick sample of this extremely important #content: “Patriots assemble on this day in history / Guided by the internet, a deep conspiracy / Our president of game shows conjured up the plan / We’ll march with flags and bear spray into the promised land.”

What’s more, the accompanying imagery contains some extremely entertaining Photoshopping, something our own Photoshop whiz Axl Rosenberg would surely appreciate.

Schaffer continues to sit in an Indiana jail six weeks after turning himself in to the authorities. He awaits extradition to Washington D.C. to stand trial for six federal charges stemming from the events on January 6.

Sponsored Links from Across the Internet
Show Comments
Related Articles
Worst Week Ever 0
Every Time James Hetfield Laughs in a Metallica Song, Iced Earth Parody Band Flattened Earth, and More Stories You May Have Missed This Week
March 5th, 2021 at 5:00pm MetalSucks